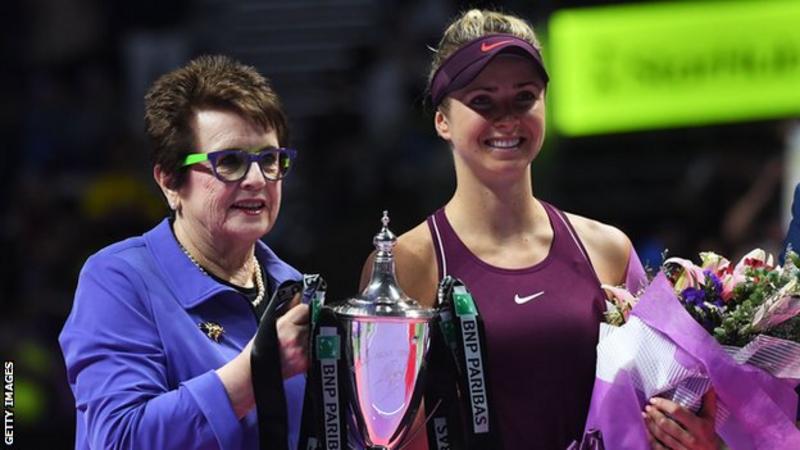 Elina Svitolina beat Sloane Stephens to claim the biggest title of her career at the WTA Finals in Singapore.

The first Ukrainian to be crowned champion, Svitolina recovered from a difficult start to win 3-6 6-2 6-2.

Stephens, the 2017 US Open champion, controlled the first set but Svitolina broke three times in the second.

The 24-year-old then repeated the feat in the decider to become the first player to go unbeaten at the tournament since Serena Williams in 2013.

“It is amazing. I am very pleased with my performance this week,” said Svitolina, who has won her past nine finals on the WTA Tour and not lost one in the last two seasons.

“There were nerves early on but I was just trying to fight for every ball and I think that made the difference in the end.”

American Stephens, the world number six, raced into a 3-0 lead in the opening set and the 25-year-old went on to wrap it up in 46 minutes.

The trend of this tournament suggested the match would go to three sets, however – 10 matches have gone the distance this week, beating the previous high of six – and it duly did so when Svitolina ran away with the second set.

And the world number seven continued her dominance into the final set, breaking three times once more to secure the title.

“Sloane played amazing tennis so I really had to play my best tennis to win,” Svitolina added.

Stephens, making her debut at the event, won all three of her group matches and then beat Karolina Pliskova in the semi-final.

“It is not the way I wanted to finish but I worked really hard to get here and I can be really proud of my result today so I am really pleased with that,” she said.

The WTA Finals feature the leading eight players of the year, split into two groups of four for round-robin matches before the semi-finals and final. This year, ninth-ranked Kiki Bertens was given a chance after world number one Simona Halep was ruled out with a lower-back injury.

Defending champion Caroline Wozniacki went out at the group stage and has since revealed she was diagnosed with rheumatoid arthritis in August.

The Finals were held in Singapore for the fifth and final time before moving to the Chinese city of Shenzhen next year.