From the Rockies’ point of view, their 9-6, 10-inning win over the Dodgers Friday night was indescribably delicious. This was “Cuckoo For Cocoa Puffs” kind of stuff. For the record, the Rockies scored three runs in the 10th on an RBI single by Trevor Story and a two-run home run from Charlie Blackmon, who blasted a Jimmie Sherfy slider deep […]

END_OF_DOCUMENT_TOKEN_TO_BE_REPLACED

To trade or not to trade? For these five MLB teams, it’s not an easy decision

Covers MLB for ESPN.com Former deputy editor of Page 2 Been with ESPN.com since 1995 As much as fans of all teams in the playoff chase expect their clubs to make a big splash at the trade deadline, that isn’t really the way things work. Most of the big trades in recent seasons come from strong teams looking to get […]

END_OF_DOCUMENT_TOKEN_TO_BE_REPLACED

Joined ESPN in 2016 to cover the Los Angeles Rams Previously covered the Angels for MLB.com Eight Oakland City Council members will cast nonbinding votes for a proposed $12 billion development and ballpark plan on Tuesday morning. An affirmative vote will simply keep the ambitious project alive; but a dissenting vote, the Oakland Athletics say, will kick-start the team’s relocation […]

END_OF_DOCUMENT_TOKEN_TO_BE_REPLACED

Sunday night’s game between the Red Sox and Yankees was paused for a few minutes after an unexplainable light appeared in center field. The incident occurred during DJ LeMahieu’s at-bat during the bottom of the seventh inning. After the second pitch of the at-bat, Red Sox catcher Christian Vazquez could be seen standing up and talking with the umpire. Play resumed, and […]

END_OF_DOCUMENT_TOKEN_TO_BE_REPLACED

Fan who hit Verdugo banned from all MLB parks

NEW YORK — The fan who hit Boston Red Sox left fielder Alex Verdugo with a baseball thrown from the Yankee Stadium stands has been banned for life from attending major league games. The decision was confirmed Sunday by spokesmen for both the New York Yankees and Major League Baseball. Red Sox manager Alex Cora briefly pulled his team off […]

END_OF_DOCUMENT_TOKEN_TO_BE_REPLACED

When the gunshots started to echo all around Nationals Park, San Diego Padres star shortstop Fernando Tatis Jr. quickly thought about the team’s family members and friends in the seats. Tatis bolted from the bench down the left field line Saturday night, helped open a gate to the stands and began ushering a group back to the dugout to shelter. […]

END_OF_DOCUMENT_TOKEN_TO_BE_REPLACED 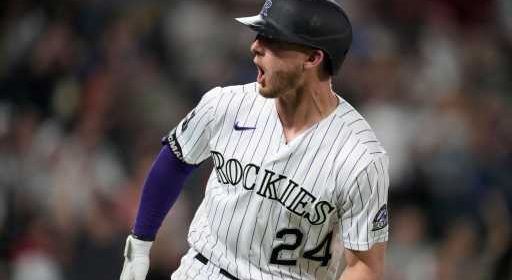 If we play the fantasy baseball game “could have, would have, should have,” the Rockies are a wild-card playoff contender. Consider: When they opened the so-called “second half” of the season Friday night against the Dodgers at Coors Field, the Rockies’ record was 40-51. They were 31-17 at Coors Field but 9-34 away from home. Now consider: The Rockies had […]

END_OF_DOCUMENT_TOKEN_TO_BE_REPLACED

Chaos erupted during Saturday night’s baseball game at Nationals Park after gunshots were heard outside the Washington, DC, stadium. The DC Police Department said on Twitter that two people had been shot outside the ballpark, adding there was “no ongoing threat.” “As a result of the shooting incident, tonight’s @Nationals game has been suspended,” police wrote. Watch live coverage every […]

END_OF_DOCUMENT_TOKEN_TO_BE_REPLACED

Drew Robinson is ending his quest to return to the major leagues as a player after surviving a suicide attempt. Next up for him is an off-field role in an MLB organization. Robinson announced Friday on social media that he will retire as a player after this weekend and then join the Giants’ front office as a mental health advocate. […]