‘This is crazy’: Gauff reaches first WTA final in Austria

American teenage sensation Coco Gauff has progressed to her maiden WTA final as she eased past Germany's Andrea Petkovic 6-4, 6-4 at the Linz Open. 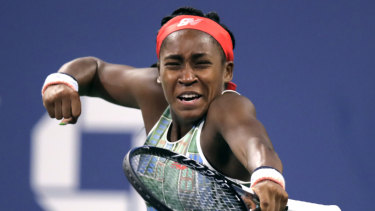 Coco Gauff has made it to the Linz Open final.Credit:AP

Gauff only made it to the main draw of the event as a lucky loser but has made her opportunity count with a barnstorming run to Sunday's final, where she will meet former French Open champion Jelena Ostapenko.

The American faced 10 break points but recovered well to fend off nine of them against Petkovic in the semi-final, before sealing victory on her second match point.

"This is crazy," Gauff said.

"I thought I was out in qualifying and now I'm here.

"Linz is my special place.

"This was one of the highest-level matches I've played. Andrea hit a lot of winners and put pressure on me.

"I was fighting for every point, even at break points down, I just tried to get the serve in and make her play a point."

Gauff's popularity has soared since she became the youngest player to qualify for the Wimbledon main draw in the professional era and reached the fourth round in July, beating seven-time grand slam champion Venus Williams along the way.

She also enjoyed the home support at the US Open before falling to Naomi Osaka in the third round.

Having dropped just one set in her main draw matches in Linz this week, Gauff has already ensured a place in the top 100 when the new WTA rankings are released on Monday.

Meanwhile, in Shanghai, Russia's Daniil Medvedev reached his ninth final of the season after he defeated Stefanos Tsitsipas 7-6 (7-5), 7-5 at the Shanghai Masters.

Third seed Medvedev won 84 per cent of his first-serve points and saved four of five break points to improve his win-loss record for the calendar year.

The tiebreak saw the first 10 points won by the server before Medvedev pounced to capture the opening set as Greek sixth seed Tsitsipas struggled with his backhand. 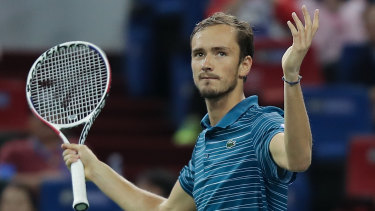 Daniil Medvedev is through to his ninth final of the season.Credit:Getty Images

Serving for the match at 5-4, Medvedev conceded a break after committing four errors.

But he shook off the disappointment by breaking Tsitsipas in the next game and went on to book a spot in his sixth straight final with a clinical serve and volley combination.

"To be honest, I really felt good today and I felt like I could win this match. I didn't feel bad," said Tsitsipas, who has yet to beat Medvedev after five career meetings.

Novak Djokovic, Rafael Nadal, Roger Federer, Dominic Thiem, Medvedev and Tsitsipas have all booked places in the ATP finals, with two spots still up for grabs at the season-ending tournament in London.

World No.6 Zverev strengthened his position in the Race To London standings with a 6-3, 6-4 win over Italian Matteo Berrettini.

The victory helped Zverev climb to seventh with 2855 points in the race, 330 points more than eighth-placed Berrettini.

Zverev heads into his first Shanghai Masters final with a 4-0 head-to-head record against Medvedev, although their most recent meeting came over a year ago in Toronto.

"We've played some fantastic matches, all going my way until now. I hope tomorrow that will not change," fifth seed Zverev said.

"He's probably the best player in the world right now. I hope it's just going to be a good match tomorrow."