Millman down for US Open despite concerns

John Millman has reservations about travelling to New York for the US Open but the Australian tennis star says he needs to "get back out there and get things rolling again".

The ATP and WTA tours are on the cusp of resuming after professional tennis was shut down by the coronavirus pandemic in March. The United States Tennis Association confirmed overnight that it was persisting with plans to stage the hard court major next month, coupled with a lead-in event at New York's Flushing Meadows precinct. 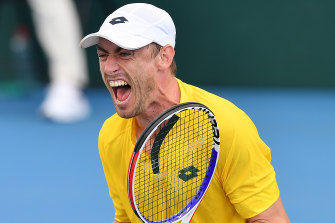 World No.43 Millman confirmed he was planning to travel to the United States, but said he was hopeful there might be some more stringent fines in place for professional players who breach any bio-security rules that are put in place.

Australia’s leading player, women’s world No.1 Ashleigh Barty, has already confirmed she’ll skip the US Open due to the “significant risks” of the COVID-19 pandemic. The French Open champion will delay for as long as possible any decision about travelling to Europe later this year to defend her title.

Fellow Queenslander Millman, however, wants to resume his career as soon as practicable.

"I definitely have my safety concerns and potentially there are a few more questions I'd like to be answered because a couple of the tennis players have shown they can't really be trusted with a bit of their behaviour," he said.

"Look, my situation is probably slightly different to Ash.

"I probably need to start earning a living again, to be honest with you.

"I respect the decision that Ash made and it's something that I've contemplated a lot, too.

"[But] tennis is an individual sport and we're our own private contractors pretty much."

Several of the world's top players, including world No.1 Novak Djokovic, have tested positive to coronavirus this year. There has also been numerous incidents of players flouting physical distancing and self-isolation rules.

Djokovic staged his own Adria Tour tennis event but it attracted considerable criticism after images and videos emerged of the players hugging at the net, playing basketball together and partying.

Djokovic, fellow Serb Viktor Troicki, Bulgarian Grigor Dimitrov and Croatian Borna Coric all tested positive for the virus and the event had to be called off.

In confirming that the US Open was still on target to start on 31 August, the USTA said full details of the health and safety plan would be released closer to the start of the tournament.

"We remain confident that our top priority, the health and safety of all involved in both tournaments, remains on track," the USTA said in a statement.

"Working with our medical advisory group and security team and the state of New York, we have developed a strong health and safety plan to mitigate the risk of infection within the contained environment comprised of the tournament site and player hotels."

Millman said any players – as well as their entourages – were obligated to do the right thing.

"There's going to be a lot of trust between players' groups there, for people to do the right thing," he said.

"I'm probably a little bit more hesitant just based on what we've seen the last few months, you know, with the goings-on of a few of the players.

"Hopefully some bigger sanctions, some bigger fines can be put into place for anyone breaching the safety of others because that's the most important thing.

"It's unchartered territory for a lot of people. The USTA, who are in charge of the US Open, they're almost the guinea pigs. I'm sure they're going to be trying their utmost to provide [a] safe environment.

"Obviously it's a little worrying when you look at the state that the United States is in, in their response to COVID."