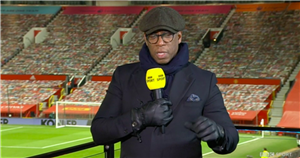 Ian Wright has slammed Jose Mourinho for his 'degrading' behaviour while he was manager of Manchester United.

Wright was referring to Mourinho's treatment of Luke Shaw, who was the subject of regular criticism from the manager while the defender battled injuries and poor form.

Shaw has been resurgent under current boss Ole Gunnar Solskjaer this season, and is being widely hailed as England's best left-back after a string of impressive displays.

The 25-year-old was given a rest on the bench for Tuesday's FA Cup win over West Ham, but replaced Alex Telles late on with the tie headed for extra time.

And speaking ahead of the game, Wright hailed Shaw for turning his form around.

"Luke Shaw when he came to United from Southampton was a fantastic player, but he fell away a bit," said the Arsenal legend.

"He had injuries and lost form, but he has turned it around. He is fitter, stronger and is showing what he is capable of.

"Some of the treatment he got from Jose Mourinho was degrading – I didn't like to see it."

Shaw became the most expensive teenager in world football when he joined United from Southampton for £33million in 2014. After suffering with injuries during Louis van Gaal's reign as manager, Shaw struggled for form and was often publicly singled out by Mourinho after the Portuguese took charge in 2016.

When Shaw missed a win over Swansea through injury in November that year, Mourinho said: "Luke Shaw told me this morning that he was not in the condition to play so we had to build a defensive line.

"There is a difference between the brave, who want to be there at any cost, and the ones for whom a little pain can make a difference.”

Following a 1-1 draw with Everton in April 2017, the manager claimed he had to do Shaw's thinking for him, saying: "He was in front of me and I was making every decision for him. He has to change his football brain."

And after a win over Brighton in March the following year, Mourinho compared Shaw unfavourably to midfielder Nemanja Matic, saying: "Matic was an island of personality, desire, and control surrounded by a lack of personality, a lack of class, and a lack of desire.”

Mourinho was of course sacked in December 2018, having led United to the Europa League and the League Cup – but crucially not to the Premier League title.

Shaw has certainly taken responsibility for his performances on the pitch since then, developing into one of United's best players both in attack and defence this season.

Ahead of Tuesday's game against West Ham, the left-back said he never lost faith in his own ability.

"I always believed in myself," he said. "There were times where maybe people were thinking ‘maybe he could leave’, but I always believed that one day I would be able to fight my way back into the team and show people what my qualities are."

On Mourinho's criticism, he added: "It was difficult because I wasn’t able to get my word across.

"A lot of people were behind me here, so I knew I had that backing, but I just needed to keep my head down and keep quiet.

"People were saying negative things about me but I just look back at it as a learning curve and something that has improved me as a person off the pitch, not just on it."