Ange Postecoglou could have so easily ended up like the eccentric director in Lost in Translation. In the 2003 film, Bill Murray stars as an ageing American actor who flies to Tokyo to film a TV commercial for Suntory.

On set, the director has some very specific instructions, pacing back and forth as he launches into a long, emotive diatribe in Japanese, telling him to pretend as if he's Bogie in Casablanca: "'Here's looking at you, kid' – Suntory time!'"

The only problem is he is let down by his interpreter, who leaves Murray's character perplexed as she tells him: "He wants you to turn, look in camera. OK?"

Postecoglou was at risk of similar pitfalls when he signed on with Yokohama F. Marinos. As a coach with very specific ideas on how to play football and a famed capacity to motivate his players with powerful game-day speeches, his first challenge was finding someone he could trust to accurately translate everything he had to say.

His second challenge was navigating the political pitfalls of Japanese football. There are plenty of tales about how veteran players, assistant coaches and translators can undermine a foreign coach. Graham Arnold – who lasted just five months coaching Vegalta Sendai in the J.League – has first-hand experience. 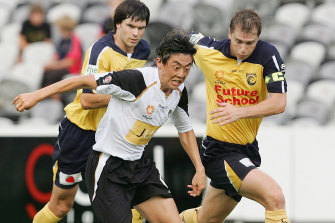 Naoki Imaya during his brief time with the now-defunct New Zealand Knights back in 2006.Credit:Getty Images

That's why one of Postecoglou's first and most important signings was Naoki Imaya, a Japanese-born, Australian-raised former player who served as the linguistic conduit between the coaching staff and the rest of the club last season.

An aspiring coach himself, Imaya was like a sponge as he accompanied Postecoglou through all manner of meetings, press conferences, interviews and team talks as he laid out his ultra-aggressive blueprint.

It was an enormously valuable opportunity, but a massive responsibility, too. At times, he had to defend his boss as sceptical Japanese players privately questioned his coaching ability.

"It was a hard first few weeks," Imaya told the Herald. "Players would come up to me and try and get on my side in a way. 'Come on Naoki, are you sure this guy's got any idea?' They would try and swing it to make Ange the bad guy.

"Obviously I had to stand firm. I said, 'no, he's a top coach – listen to him.' That kind of conversation doesn't get anywhere. 'If you want to talk to him, we'll go and talk to him'."

Saturday looms as a coronation for Postecoglou and Yokohama F. Marinos, who will clinch their first J.League title in 15 years if they avoid a four-goal defeat at home to FC Tokyo.

History has proved that Postecoglou brings success wherever he goes – but only after players, staff and supporters endure what can be an extremely difficult teething period at the beginning of his reign as he weaves his plans into the fabric of the club.

Imaya, who turned out for the New Zealand Knights in the inaugural season of the A-League, played a small but vital role in helping him through it.

A childhood friend of Postecoglou's long-time assistant Peter Cklamovski, Imaya's family moved to Sydney when he was 10, and the pair grew up kicking footballs in the park together. Now 39, Imaya's modest playing career was spent mostly in the NSW state league but included a couple of stints overseas and a handful appearances in the A-League.

I was getting goosebumps when I was translating sometimes, the speeches were that good.

Imaya had worked for a year and a half as the Japan-based scout for Postecoglou's Socceroos. He had only met the man himself once – before Australia's 2-0 World Cup qualifying defeat to the Samurai Blue in 2017 – when Cklamovski presented the chance to work with him full-time.

"He basically said, 'look, he wants someone that he trusts. Can you do it?' I said, well, I want to be a coach, but there's so much I could learn from him and Peter," Imaya said.

Imaya could sense the views of the squad gradually shifting over the course of the year as Postecoglou's philosophy started to bear fruit. There was no singular juncture when the entire group bought in – most players had their own individual moments of enlightenment. But their first J.League victory did convert quite a few.

Yokohama had taken just one point from their first three league matches under Postecoglou and pressure was mounting. An away trip to traditional powerhouse Urawa Red Diamonds was next.

"I think some coaches would stumble here," Imaya said. "I was wondering, what's he going to say? Because at that time, I would say 95 per cent of players didn't believe in his football. It was just a bad atmosphere going into it. What the hell are we going to do?

"He started talking about how he started his career and how some coaches would go for the draw. 'Maybe we'll play different today, we'll sit back and try and get one goal on the counter and defend that one goal, or maybe try and get a nil-all draw'.

"But he goes, 'this is where we play our football.' He did not change at all."

F. Marinos prevailed 1-0, but the performance was one of the best of the season, Imaya said, and it gave them momentum for the remainder of the year.

Imaya wasn't the only working interpreter at the club. With Brazilian and Thai players also on the books, sometimes there would be three or four people speaking different languages as Postecoglou delivered his trademark rev-ups. Even Imaya felt like running through a brick wall when he was done.

"I was getting goosebumps when I was translating sometimes, the speeches were that good," he said.

Imaya parted ways with the club at the end of last year, with Postecoglou's blessing, to return to coaching and began studying for his A-Licence this year.

Like everyone else who has watched Postecoglou operate at close quarters, Imaya is in no way surprised to see Yokohama on the cusp of silverware and believes his methods have changed Japanese football. He takes no credit for it – they were all Postecoglou's words, he simply conveyed them.

"Japanese football needed a guy like him," he said. "In culture, everything – it's an ultra-conservative country in itself. That reflects in the football and it was great, because he's more about backing yourself and that kind of attitude.

"Some people saw it from the start … it's team-orientated football. Everyone has to be involved. To do that, yes, it takes time, but that's what he believes in."