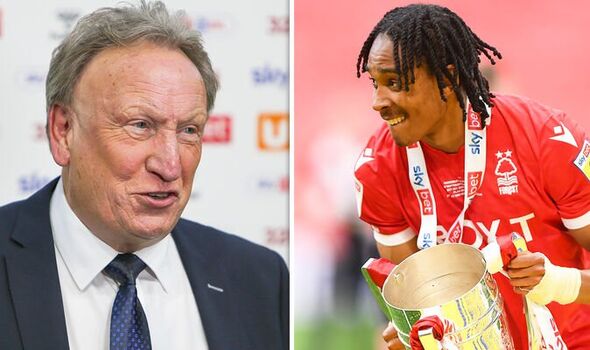 Neil Warnock has responded to Djed Spence after the star tweeted his old manager following Nottingham Forest’s promotion to the Premier League on Sunday. Warnock sent Spence out on loan last summer when in charge of Middlesbrough.

The 21-year-old has had a fine season in the Championship, earning transfer interest from the likes of Arsenal and Tottenham. Spence played an integral part in Steve Cooper’s side reaching the play-offs and ultimately gaining promotion to the top flight.

Spence was clearly unhappy with how he was treated by Warnock at Boro. The right-back took to social media after the 1-0 win over Huddersfield at Wembley, posting a picture of himself with the Championship play-off trophy and appearing to smoke a cigar.

Warnock only joined Twitter last week and Spence wanted to welcome him to the platform. He wrote: “Oh, Where’s my Manners! Welcome to Twitter @warnockofficial,” accompanied with a blowing kiss emoji.

Fans have waited for Warnock’s response, which came on Monday morning. He joked Spence would either play non-league football or Premier League.

And he also advised him to stay off the cigars. Warnock wrote: “Well done Djed, I did say you were Premier League or non league, glad you listened and took my advice on board now go and enjoy your success.

“Those cigars won’t do you any good though son,” followed by a wink emoji. Spence is set to return to Boro this summer but is likely to have plenty of admirers in the transfer window.

He spoke glowingly about Forest after Sunday’s win. He told the Nottingham Post: “(This club) means everything to me. I’ve come here and the fans and gaffer have both taken me in.

“We lose together and win together. We’re going up together. This means everything to me.”

When asked if he will be staying at the City Ground next season, Spence replied: “Hopefully”. Forest will be playing Premier League football for the first time this century.

Huddersfield felt aggrieved they did not get at least one penalty in the second half at Wembley. And Warnock tweeted his sympathy for the Yorkshire side.

He wrote: “So gutted for all you Terriers fans tonight, some very poor decisions, and what were VAR doing? You had a great season, better than I think anyone expected and hopefully can go one better next time.”

For the latest news and breaking news visit: express.co.uk/sport