Mesut Ozil steals the show as Gunners beat the Foxes

Arsenal 3-1 Leicester: Mesut Ozil steals the show as Pierre-Emerick Aubameyang climbs off the bench to score twice and help Gunners come from behind to register 10th consecutive win under Unai Emery

Unai Emery’s team had to graft for their 10th consecutive win as Leicester threatened to rip up the script when Ben Chilwell handed Claude Puel’s men a deserved lead.

But when Arsenal clicked into gear, they were simply irresistible. Simply unstoppable. 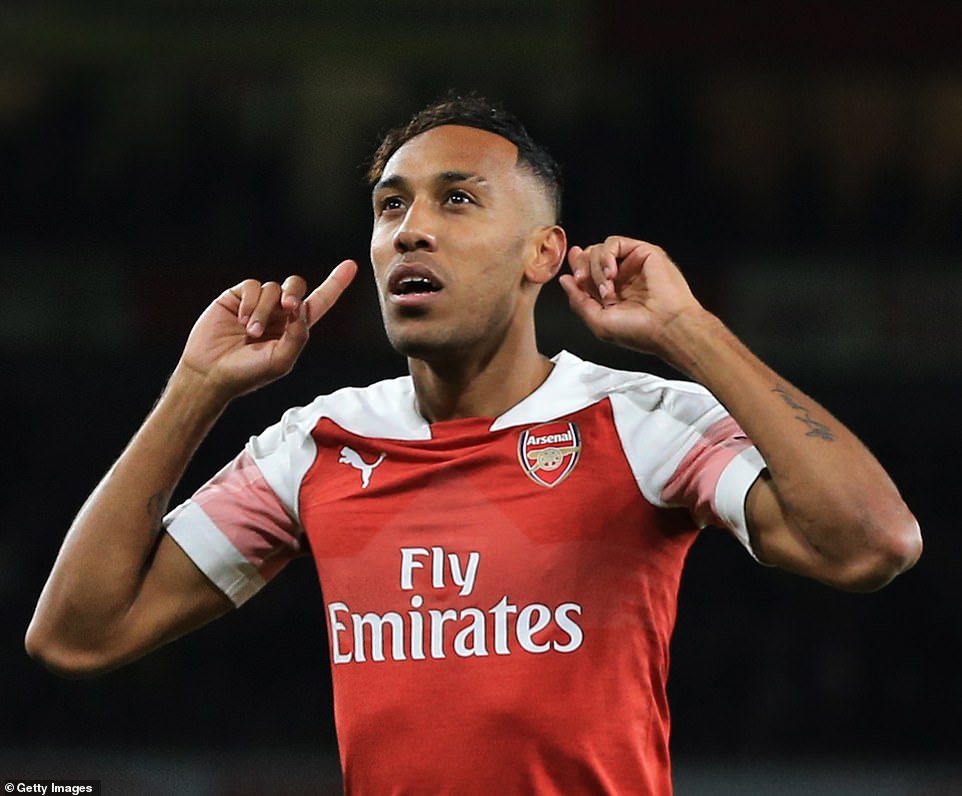 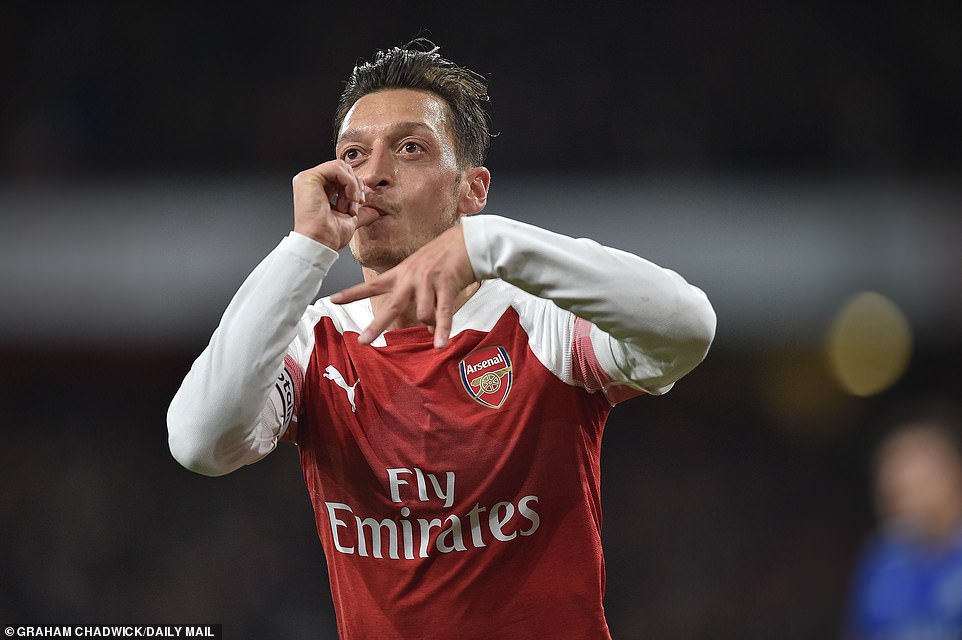 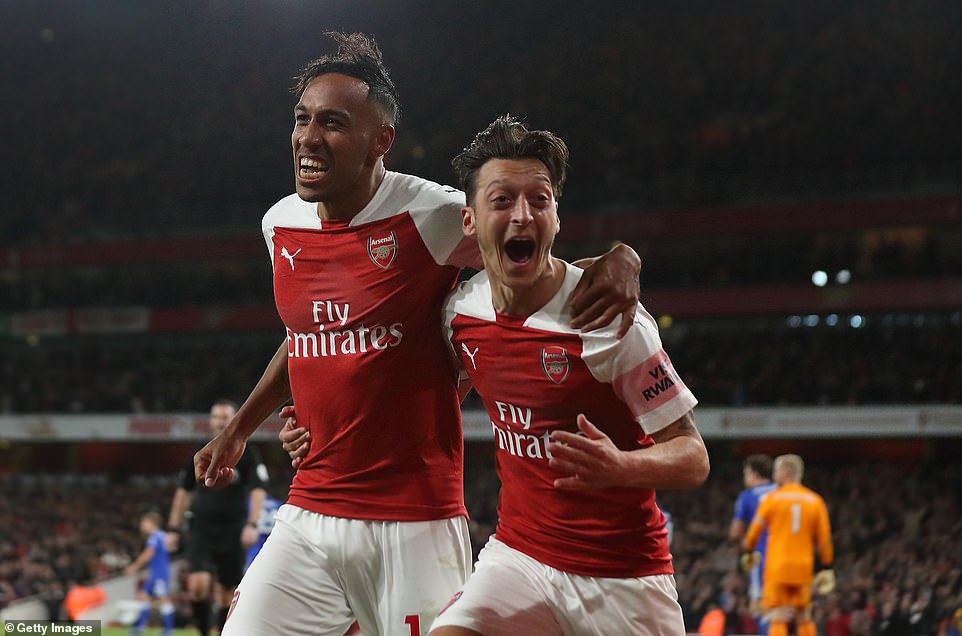 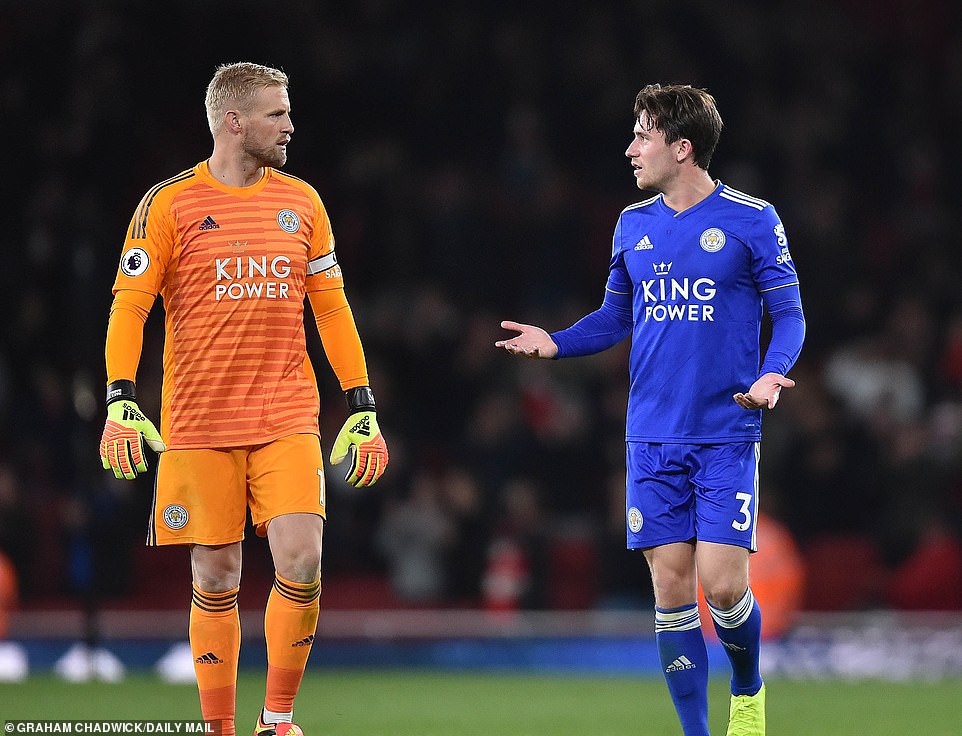 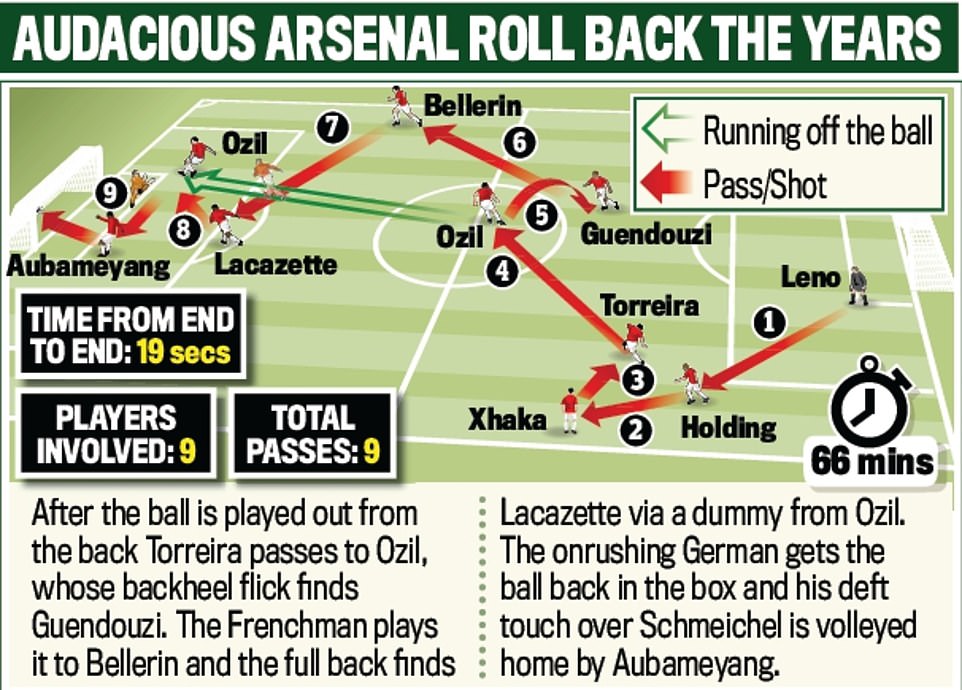 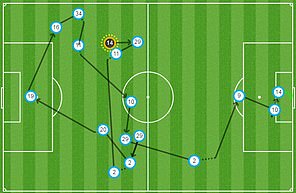 Arsenal sealed the game with a flowing move for the third as Mesut Ozil laid on a tap-in for Pierre-Emerick Aubameyang. Check out all the match stats in our brilliant MatchZone service.

First, the brilliant Mesut Ozil —captain for the night — scored the equaliser and then Pierre-Emerick Aubameyang fired Arsenal ahead just seconds after entering as a substitute.

And almost fittingly, Arsenal’s audacious third goal had birthday boy Wenger’s stamp all over it. Dummies, one-touch football, passing the ball into the net. Just how the old boss wanted it.

But Emery is in charge now and what a fine job he is doing in shaking Arsenal out of the malaise that afflicted the final years of Wenger’s reign.

When the going got tough, Emery’s side toiled and persevered. But when it was time to dazzle, boy did they dazzle.

Emery was brave in introducing Aubameyang and playmaker Matteo Guendouzi with the game finely poised at 1-1, in a move that saw central midfielder Granit Xhaka shifted to left back. 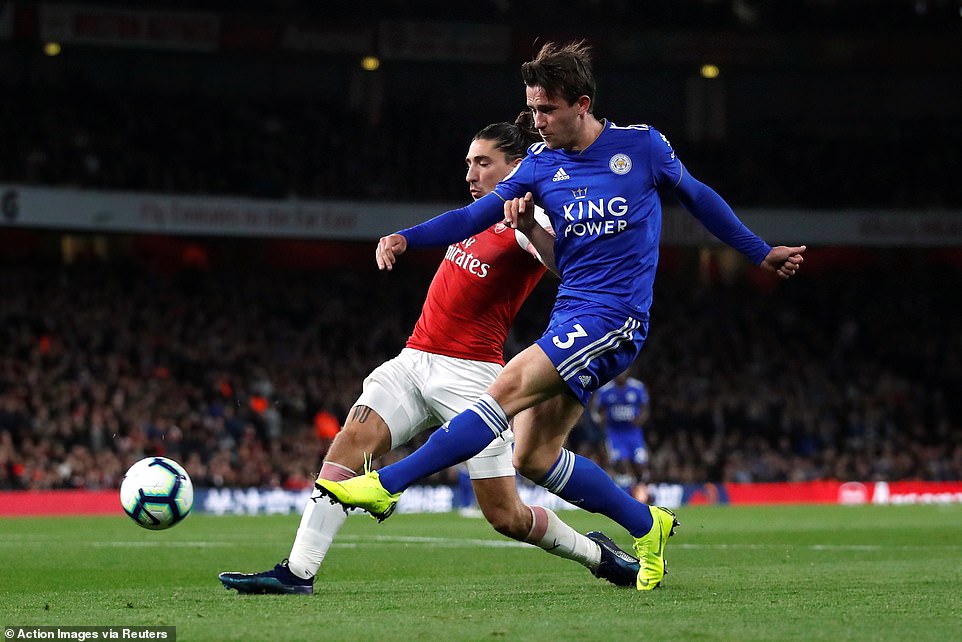 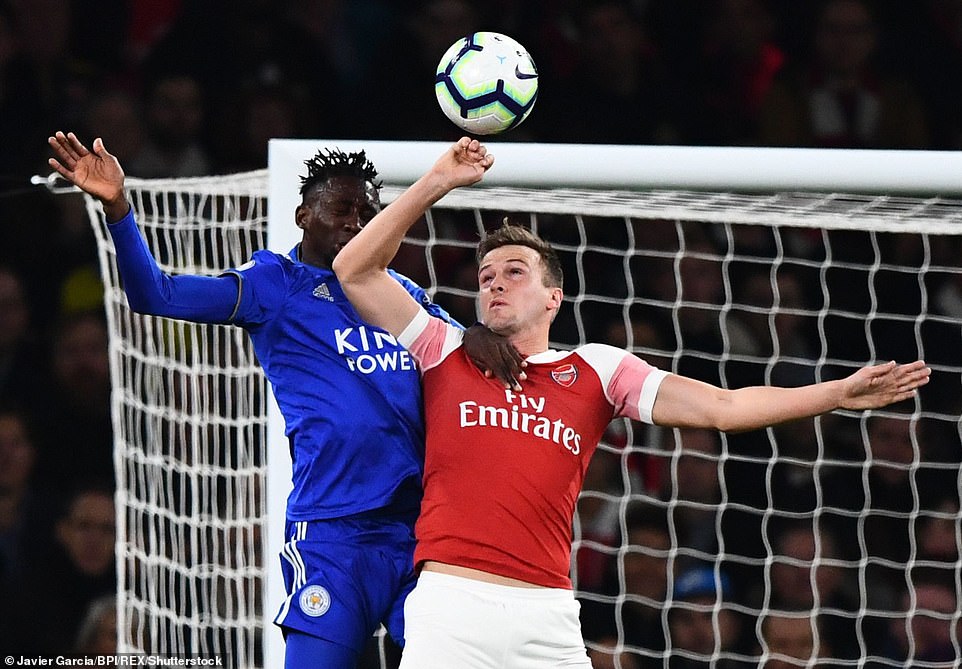 Rob Holding appears to handle the ball, but no penalty is given against the Arsenal defender as he challenges for the ball 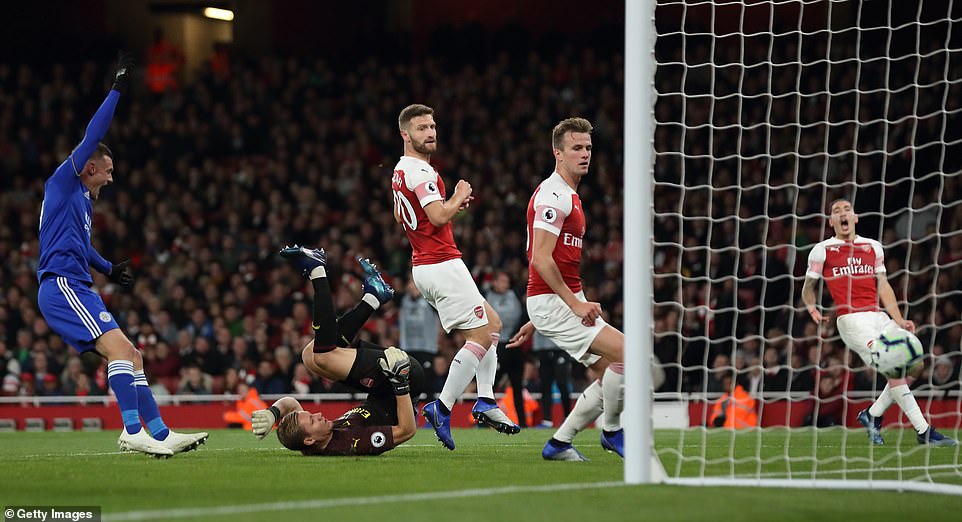 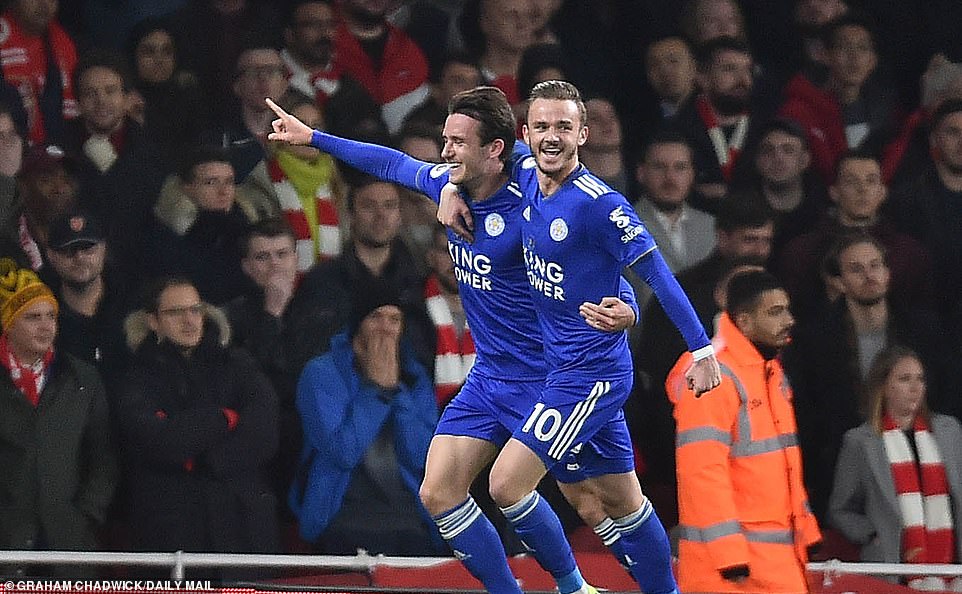 The England defender celebrates with team-mate James Maddison, but the goal went down as a Bellerin own goal

He who dares wins. Ozil produced arguably his best game in an Arsenal shirt and Aubameyang scored his fourth goal in just 16 minutes of Premier League football.

But it was the manager who swung the balance in Arsenal’s favour.

Emery was unmoved when asked whether Arsenal can challenge for the title. Nevertheless it is clear that under the Spaniard, Arsenal are going places.

Yet, they certainly didn’t start like a team who were riding on the crest of nine straight wins.

Tentative and lacklustre, the Gunners could have conceded twice in the opening 10 minutes.

Leicester’s start was breathless and Arsenal were huffing and puffing just to keep up. Kelechi Iheanacho’s tore through Arsenal’s defence and Rob Holding was booked for pulling him back when he was about to shift into overdrive in the 17th minute. 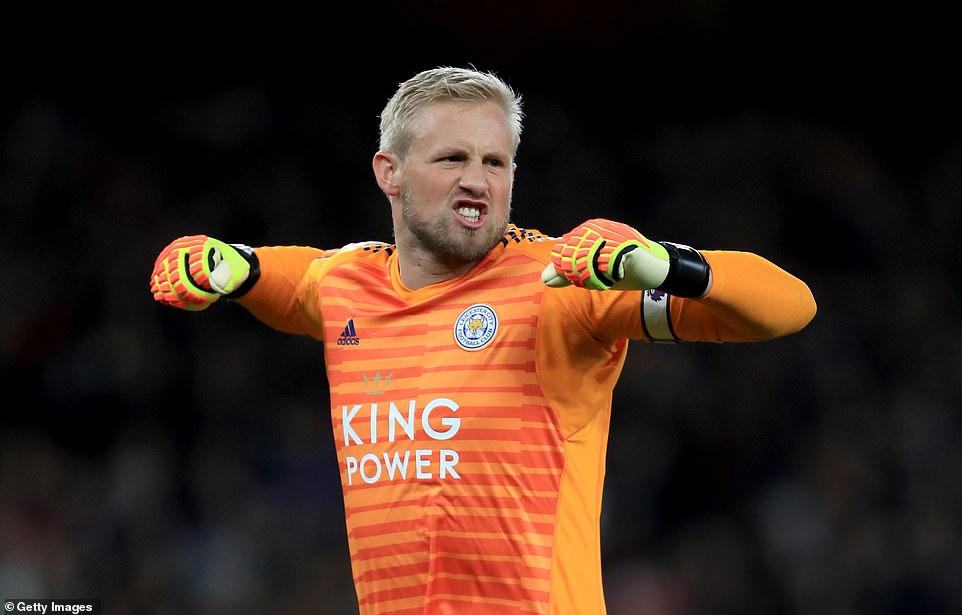 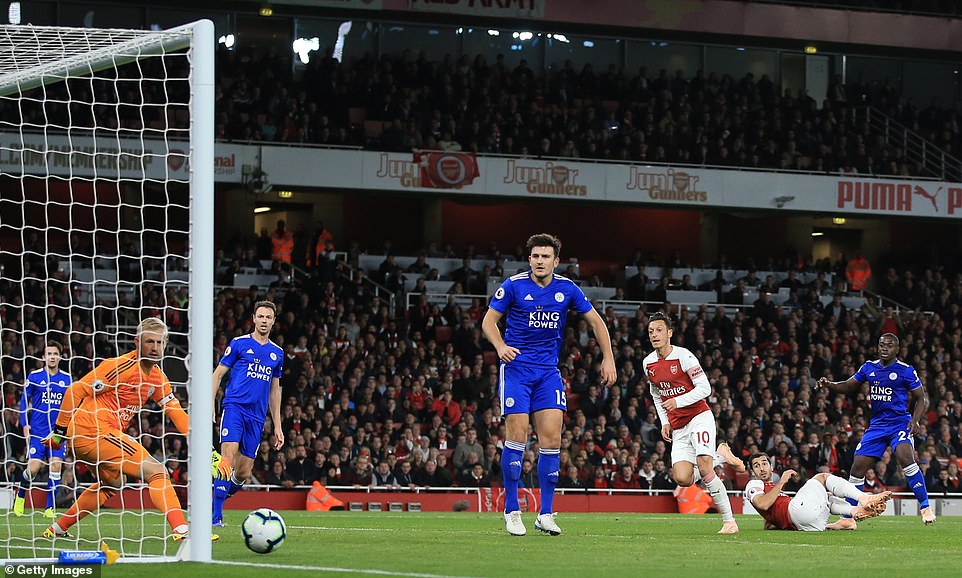 The Gunners hit back swiftly, with Ozil exchanging passes with Bellerin and finishing off a flowing move by the hosts 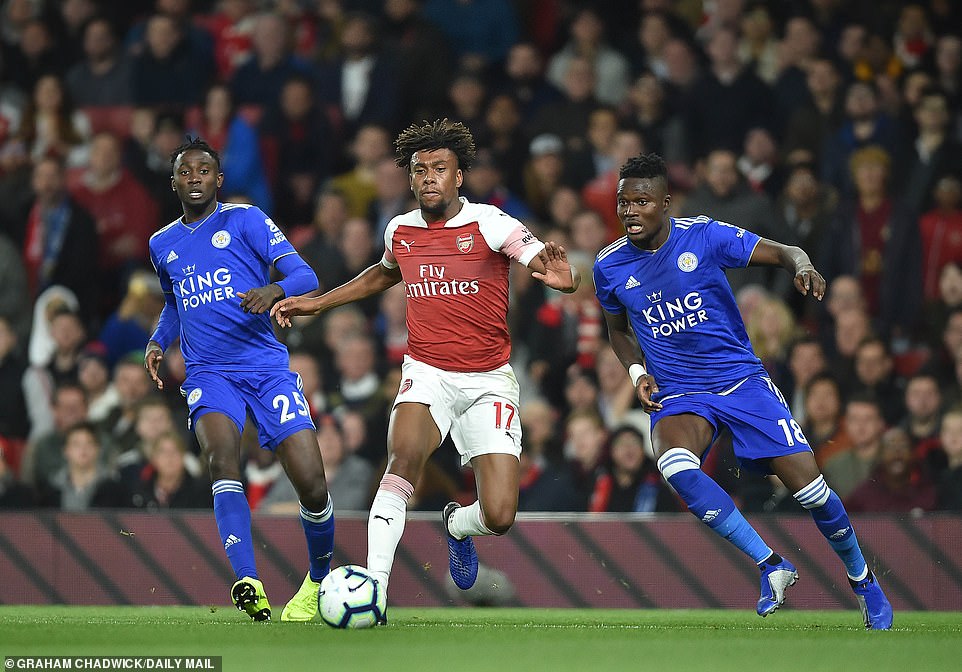 From the resulting free-kick the Arsenal defender should have been sent off. The whole ground saw Holding handle the ball. Everyone apart from referee Chris Kavanagh.

Claude Puel was apoplectic in his dug-out and understandably so. He said: ‘I didn’t understand why the referee didn’t give a penalty. It was a penalty and a second yellow card and sending off. This situation can change the game.’

Having seen his side finish the game with 10 men after Jamie Vardy left the pitch with three minutes to play, Puel quipped: ‘Jamie was ill and he could not come back into the game. It was his stomach — he could not digest the penalty decision.’

Yet, the disappointment at not being awarded a penalty did not put Leicester off their early stride and Bernd Leno had to produce an excellent 20th-minute save to stop Harry Maguire scoring with a free header.

Eventually, Leicester’s relentless pressure told. Hector Bellerin was provided with an early warning about Chilwell’s electric pace when the Leicester defender matched him stride-for-stride to stop an Arsenal attack. 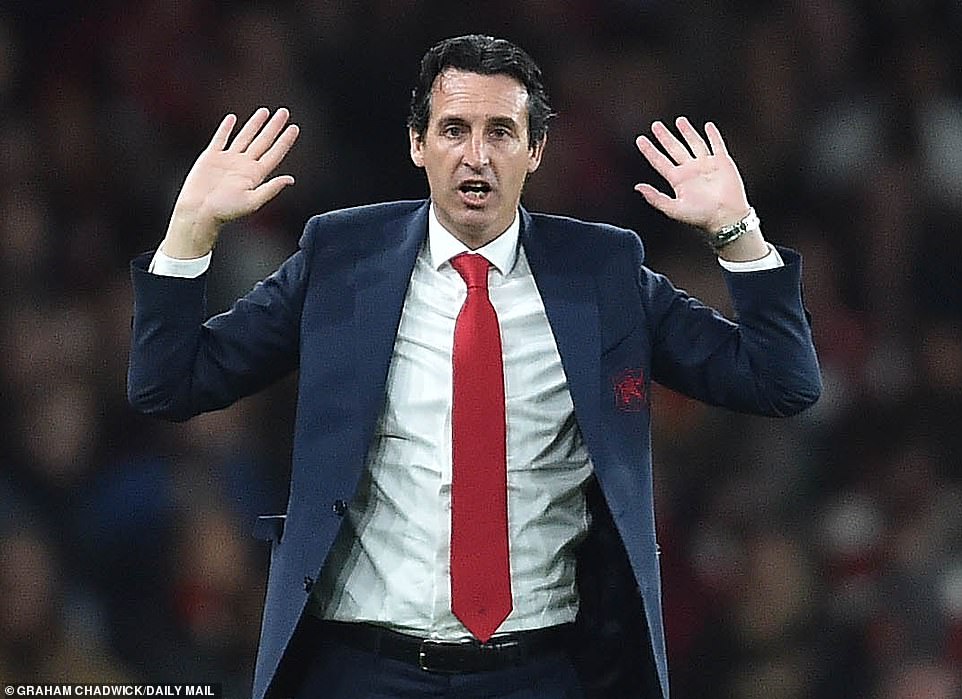 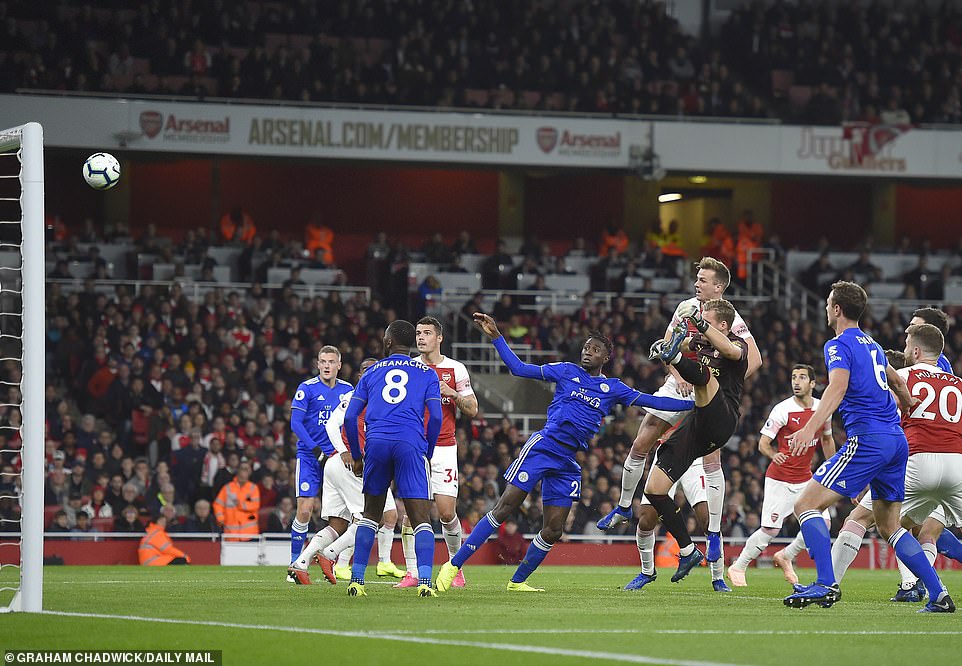 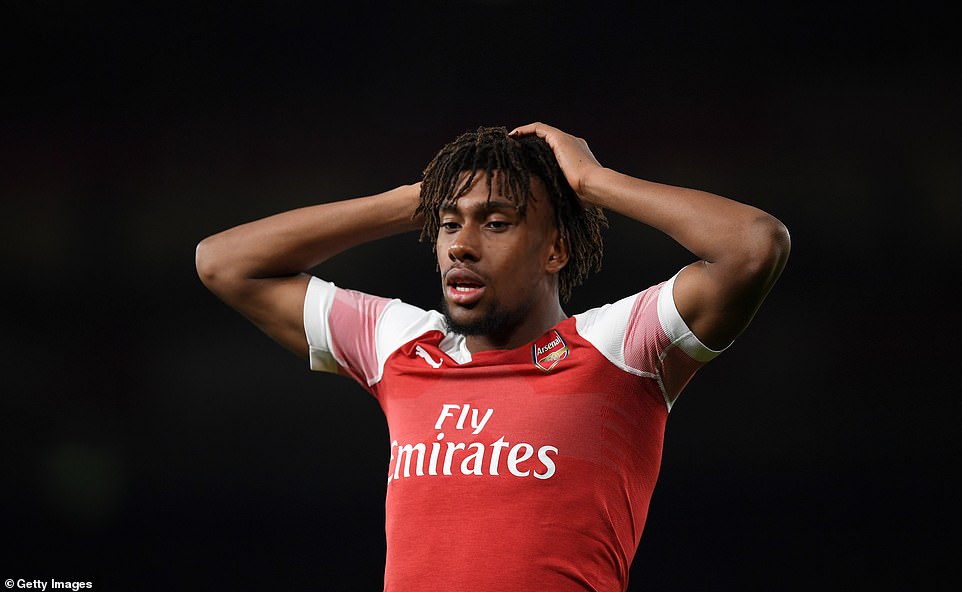 And in the 31st minute Bellerin could not keep up as England’s newest left back seared past him before finishing past Leno with a deflection off the Spaniard.

Perhaps Bellerin didn’t know Chilwell was that rapid. He does now. But fair play to him, the Arsenal full back responded to play a crucial role in helping his team back to level terms.

On the stroke of half-time, Ozil produced an unerring finish to level. Left foot, one touch, goal.But Ozil owed much to Bellerin, whose pass into the German was as accurate as the clinical finish.

Kavanagh’s whistle soon followed. Arsenal couldn’t get in quick enough — they knew they’d got away with one. And the Gunners could have been ahead inside five minutes of the restart only for Henrikh Mkhitaryan’s volley after Wilfried Ndidi’s mistake to fly inches wide. 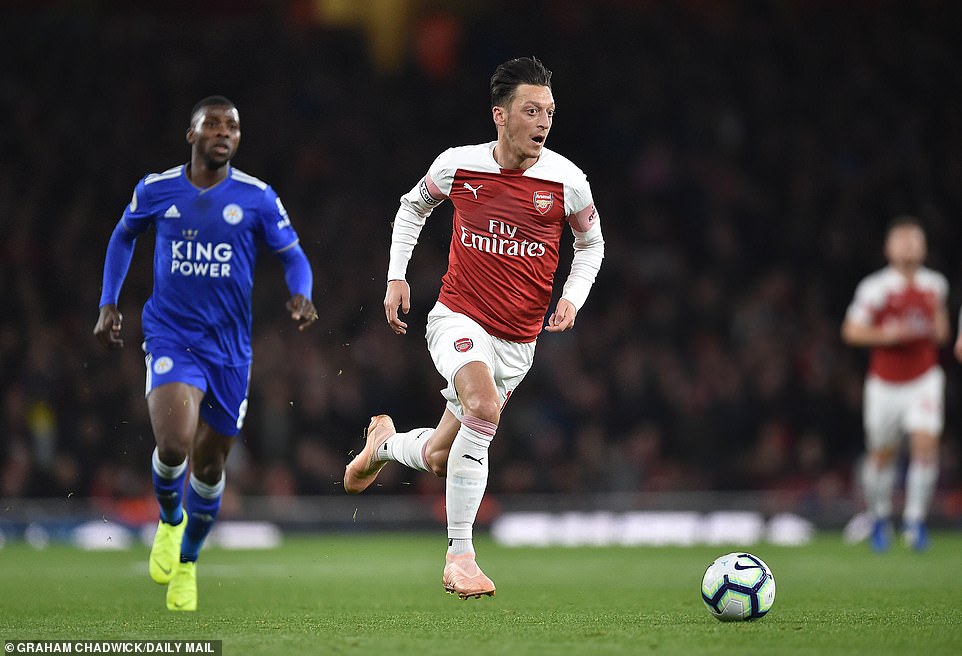 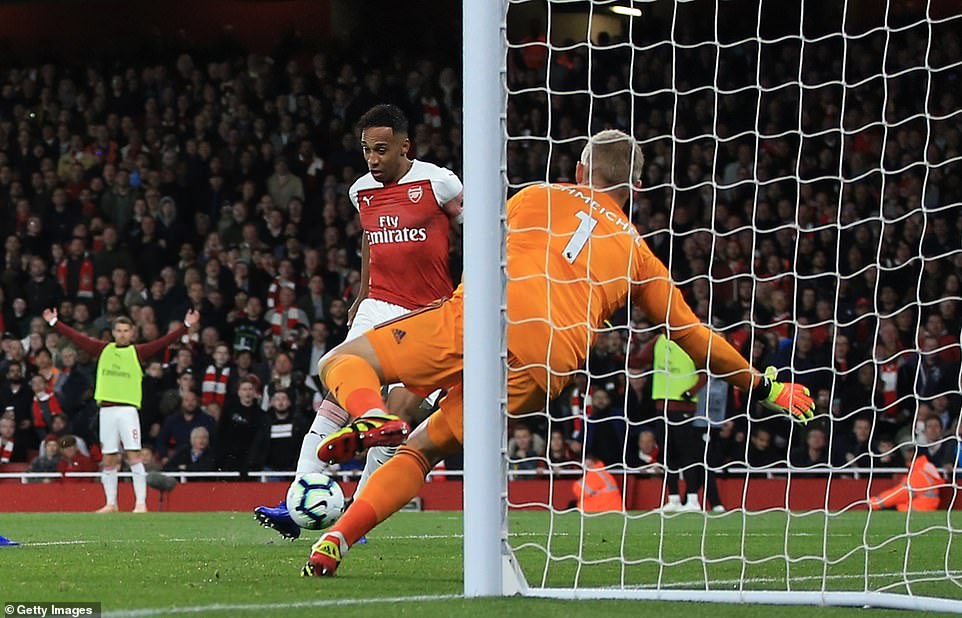 Just moments after coming on as a substitute, Pierre-Emerick Aubameyang converts Bellerin’s cross for the lead 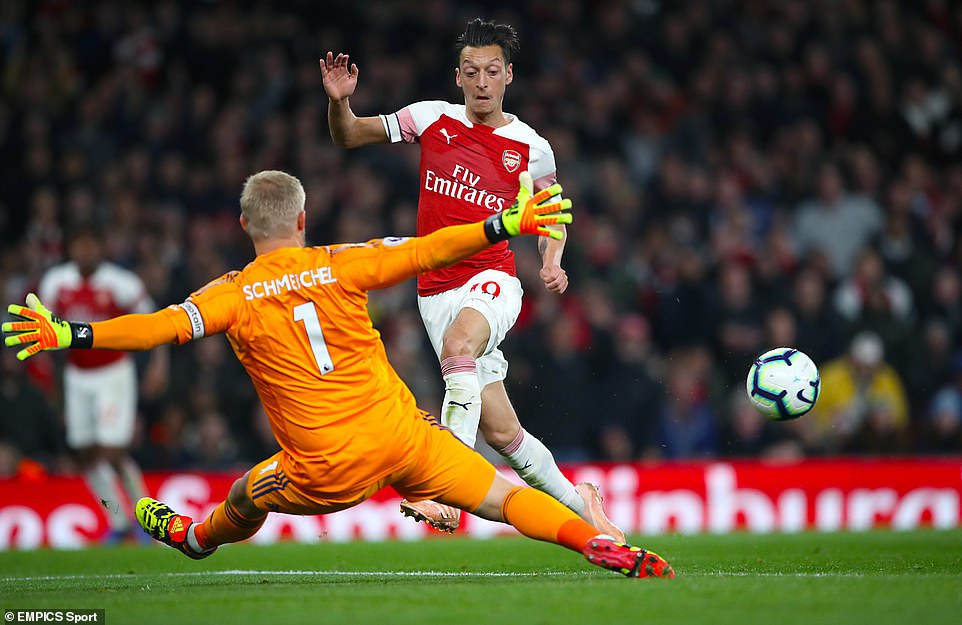 Ozil in on hand to create Arsenal’s third, slicing the Foxes open before producing a delightful assist for Aubameyang to finish

Soon after Ndidi hit the crossbar with a firm header from James Maddison’s corner. But then came Emery’s brave bold intervention in throwing on Aubameyang and Guendouzi in the 61st minute.

Five minutes later, Aubameyang had scored twice with Guendouzi playing a role in both goals.

Aubameyang’s first was put on a plate by Bellerin — but Ozil’s pass into the Spaniard was worth the entrance fee alone.