Hamilton 1-1 Rangers: Ross Callachan scores deep into stoppage time to deny Steven Gerrard’s side victory after Brian Easton’s own goal… but the Gers are still 21 points clear of Celtic at top of Scottish Premiership

Eventually, even the excellence of Allan McGregor wasn’t enough to prevent a little detour on the road towards Rangers’ inevitable title coronation.

Steven Gerrard’s side remain six wins away from securing the Premiership crown after Ross Callachan equalised with the very last kick of the game at the Fountain of Youth Stadium.

The Accies midfielder squeezed the ball in after McGregor had denied Bruce Anderson in the fifth minute of stoppage time, cancelling out a 79th minute own goal from Brian Easton. 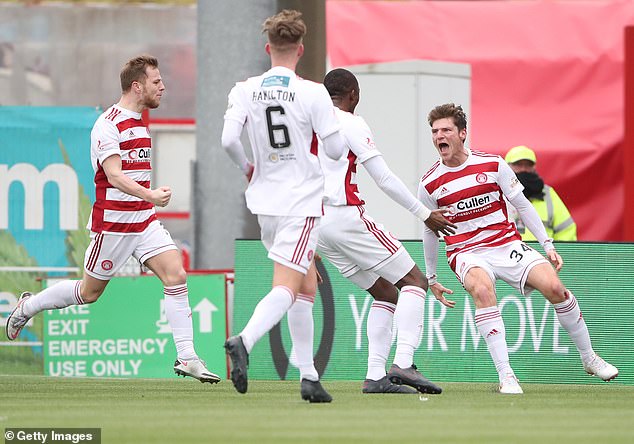 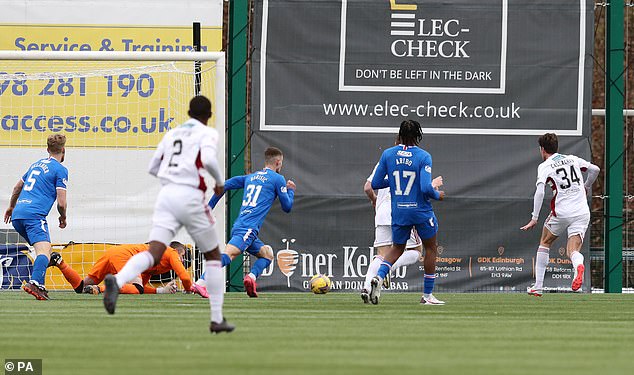 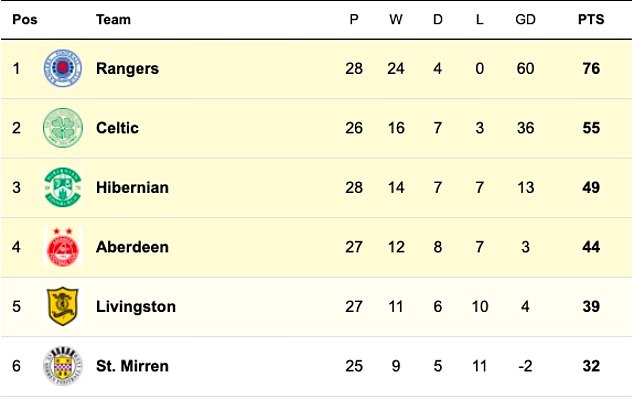 You couldn’t say Hamilton didn’t deserve it on the balance of chances. There looked nothing like the length of the Premiership between the teams over the 90 minutes, with McGregor making a clutch of impressive stops to keep Brian Rice’s side at bay until the dramatic finale.

The outcome leaves Rangers 21 points clear of Celtic having played two games more. For bottom club Accies, the draw shifts them to within three points of Ross County with two games in hand.

There was a little element of surprise with Gerrard’s line-up. South African midfielder Bongani Zungu made his first Premiership start since joining on loan from French club Amiens in October, while Cedric Itten was picked as the central striker.

That meant just a place on the bench for Kemar Roofe while Rangers weigh up whether to appeal the two-match ban offered by the SFA for his lunge on Murray Davidson.

A biting, swirling wind that scattered light snow didn’t aid the quality of the first half. Effort was plentiful and apparent. Finesse around the penalty area was less so. Needless to say, that pleased the hosts more than the visitors. 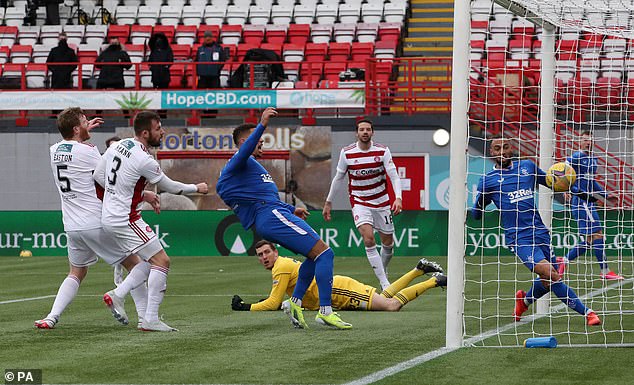 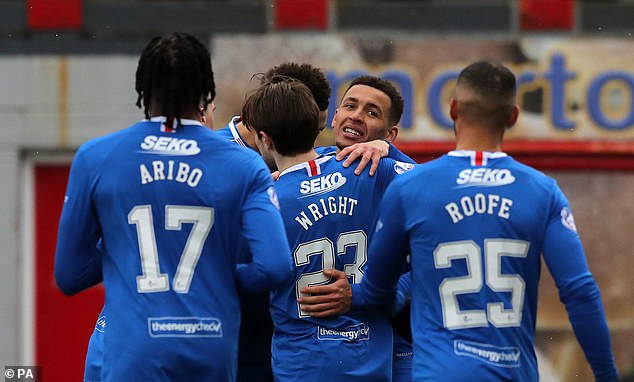 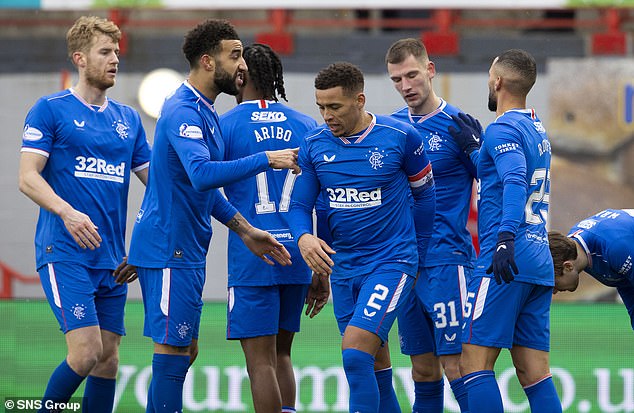 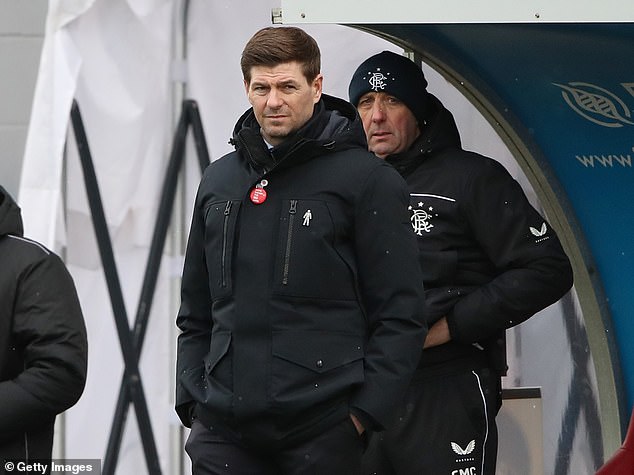 Accies sought to disrupt Rangers by pressing high and squeezing space. Callachan took the instruction too far after barely a minute with a dangerous challenge on Connor Goldson that rightly earned the midfielder a booking from referee Bobby Madden.

In the main, though, the policy bore dividends before the break. The Premiership leaders struggled to find anything in the way of rhythm.

It was Hamilton who had the first opportunity. A little combination between their forward pair saw Marios Ogkmpoe flick the ball to Anderson. The Aberdeen loanee’s eyes lit up but his strike from the edge of the box was deflected wide of target by Goldson’s timely challenge.

Gerrard’s side couldn’t establish their usual control. Ianis Hagi tried to be inventive in his passing and was a fraction away from creating chances for Itten on two occasions. The Romanian tried his own luck with s right-foot strike from distance that zipped off target.

Joe Aribo came closer on 34 minutes. Working infield to get the ball on his left foot, the Nigeria midfielder was only inches wide of Ryan Fulton’s right-hand post. 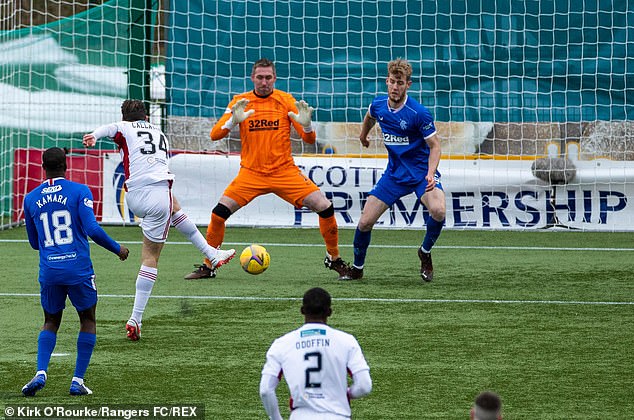 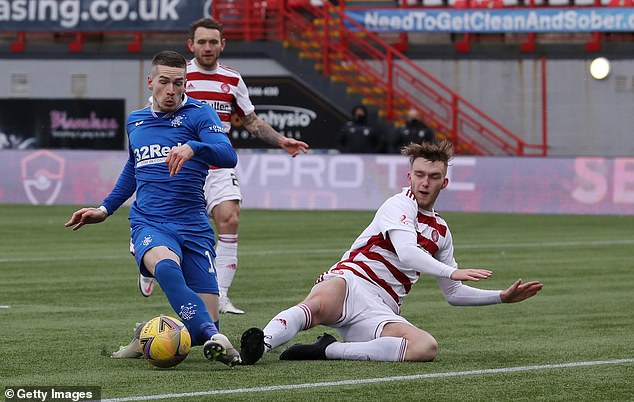 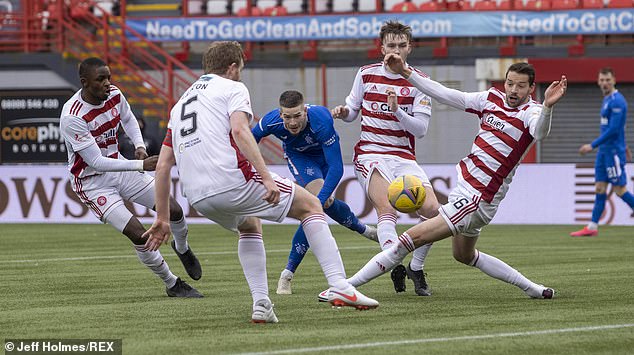 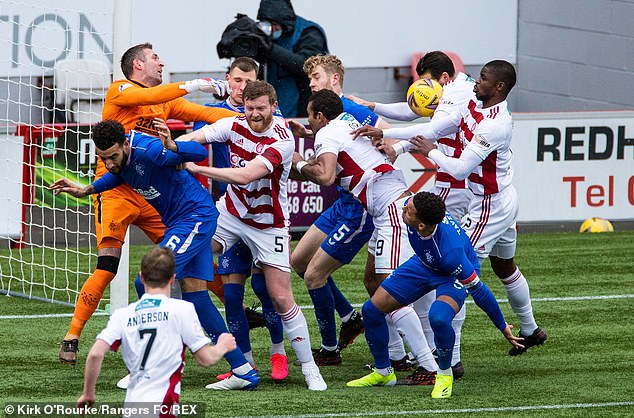 Two minutes later, however, Rangers almost gifted Hamilton the lead. Filip Helander blundered by gifting the ball straight to Anderson inside his own area. The Swede’s blushes were only spared by a excellent save from McGregor.

The Ibrox side could only improve after the break. And they did re-emerge with an increased tempo.

Helander released Ryan Kent for a flashing shot into the side-netting before the £7 million man almost picked out Itten with a low cross. The roles were reversed when Kent was then blocked out in the act of shooting by some stretched Accies defending.

Again, though, Hamilton pushed back to create a clearer chances on 54 minutes. Once more, Rangers had McGregor to thank for the scoresheet remaining blank. 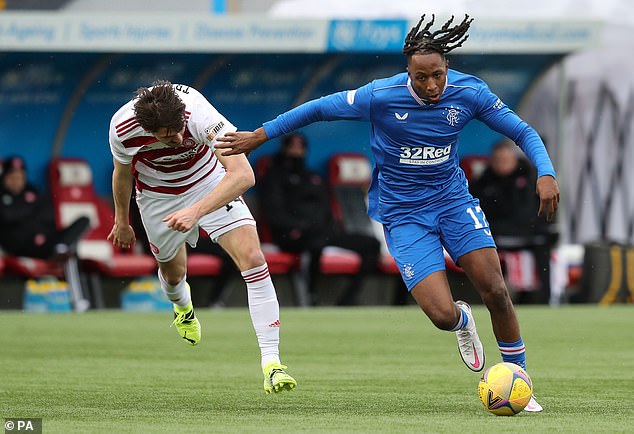 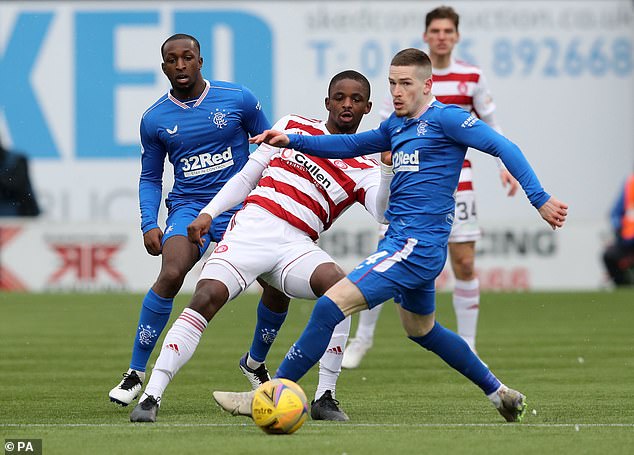 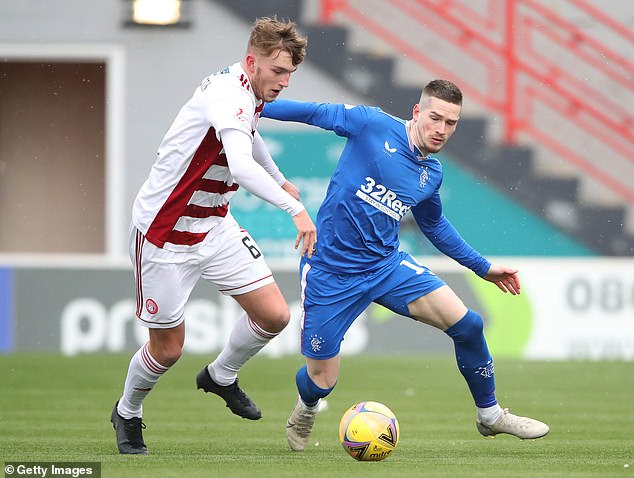 Callachan pushed the ball left for the on-rushing Scott McMann to hammer in a first-time effort. When that was expertly repelled by McGregor, the ball broke back to Callachan in a central position.

You could argue he shouldn’t have given the veteran goalkeeper a chance. Even so, there was still much to admire in the way McGregor again responded to complete a superb double-save.

Gerrard decided a chance was needed – with Ryan Jack replacing Zungu in central midfield – but Accies continued to find openings.

A deep cross from McMann reached Anderson on the right-hand side of the area. He had time to take a touch before lashing in a right-foot strike that McGregor blocked at his near post. A verbal blast at his defenders explained what the 39-year-old thought of events in front of him.

Itten was swapped for Roofe as Gerrard continued to search for a spark. One almost arrived when Jack fed Kent to bobble an effort wide but it wasn’t long before McGregor was back in action.

The attack was built on excellent play by Accies’ highly-rated young centre-back Jamie Hamilton. Robbing Hagi of possession, he surged forward before being taken down by a Helander challenge that earned the Swede a booking. Callachan struck the free-kick with plentiful power but McGregor touched it past.

It felt cruel on Hamilton when Rangers snatched the lead with 11 minutes remaining. An excellent pass from substitute Steven Davis released Borna Barisic, with Hodson slipped to grant the Croat extra space as he hared into the area.

His low, hard cross was touched by Fulton on Easton for an own goal. Had neither intervened, Tavernier and Roofe were both waiting to convert.

Callachan, though, had the very final say to ensure just a second match in which Rangers have dropped points in 2021. 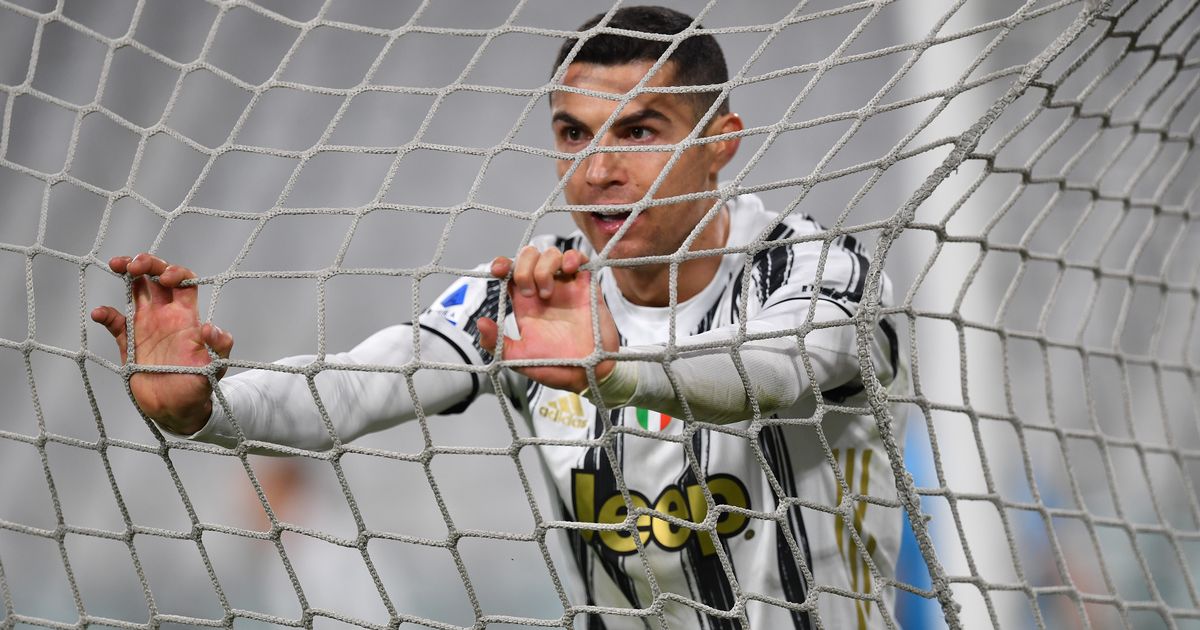