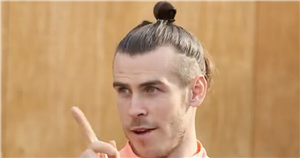 Premier League star Gareth Bale has claimed that UFOs and aliens “100 percent” exist in a conversation with his teammate Joe Rodon and that he has seen one himself.

The 31-year-old winger, who currently plays for Tottenham on loan from Real Madrid, made the comments in a video shared by the top Premier League club in which he discusses various subjects with Tottenham centre-back Rodon, 23, earlier in the month.

In the video published on YouTube, Rodon and Bale take turns asking each other questions that touch on various non-football related subjects which they pick out at random from a small container.

Bale picked the first and was noticeably delighted before asking his teammate: “Do you believe in aliens?”

Rodon says: “We’ve had a long discussion about this”, but he then hesitates and goes on to say that he wants to be “in the middle” and “not cause an argument”.

Bale tells him: “There’s a lot of conspiracy theories and there is footage of UFOs out there that’s been released by the US government.” He added: “There is definitely 100 percent aliens. 100 percent.”

The 23-year-old remained sceptical, calling the footage “fake” and quickly changed the subject by asking the next question but Bale was having none of it as he made sure to bring the question up throughout the interview searching for “a definitive answer”.

At one point, Rodon said: “Why am I getting the tricky questions and he’s getting the simple ones?” to which a smiling Bale says: “OK, who drives the UFOs?”

Rodon was unimpressed with the question as the winger insists by saying “I know some UFOs are probably some secret government things”, adding “I have seen a UFO” as Rodon quickly dismisses the claim and changes the subject again.

However, far from giving up, Bale refuses to let Rodon off the hook who insists “you don’t know what’s out there” but after some prying from his teammate, Rodon says: “I’m just gonna say yes to get you off my back” as Bale echoes: “There’s aliens.”

READ MORE: Inside story of Haaland's rise from clumsy teen to Europe's most wanted

READ MORE: Real fear for Joshua vs Fury summer fight as clock runs down on deal