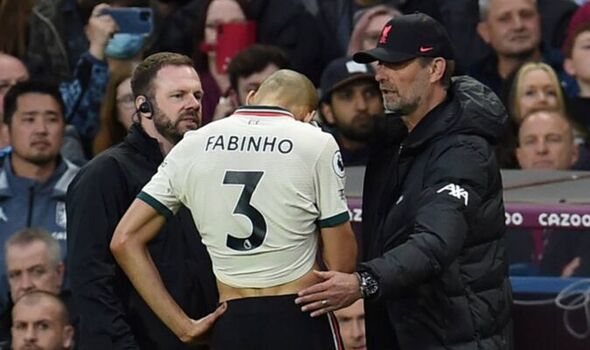 Brazil’s team doctor says he can’t be 100 per cent yet, but claims early signs from Fabinho’s injury against Aston Villa indicate he will be fit to play in the Champions League final. With Liverpool still fighting on all three remaining fronts to complete a historic quadruple, Jurgen Klopp has had to utilise his full squad depth to give his players ample rest.

Jordan Henderson, Thiago Alcantara and Mohamed Salah were among those to be taken out of the starting line-up on Tuesday night. Fabinho was the only midfielder to keep his place from last weekend’s 1-1 draw with Tottenham.

But the Brazilian was forced off in the first half after appearing to pull his hamstring. Fabinho was chasing after Philippe Coutinho but he slowed down to a halt while clutching at his left leg.

Klopp was unable to give an update on Fabinho’s condition immediately after the game. However, it appears as though Fabinho’s injury isn’t as bad as first feared, according to Brazil’s team doctor.

JUST IN: Liverpool’s Van Dijk hysterical in reply to his match rating vs Villa

Fabinho has been included in the latest Brazil squad ahead of their June international fixtures and Fabio Mahseredjian believes the 28-year-old could still feature for Liverpool in the European showpiece at the Stade de France.

“We don’t have all the information yet, but we are optimistic that he will reach the Champions League final,” Mahseredjian said.

Liverpool moved level on points with Manchester City following their 2-1 win over Villa. Pep Guardiola’s side hold a better goal difference though after their 5-0 demolition of Newcastle at the weekend.

City have three league games remaining, starting tonight away at Wolves before travelling to West Ham this weekend. Their final game of the season comes against Steven Gerrard’s Villa side, who tested Liverpool’s resolve on Tuesday.

Both Wolves and West Ham also have plenty to play for in the final few weeks of the campaign. With Manchester United faltering, an opportunity could open up for the Hammers or Wolves to break into the Europa League spots.

West Ham just need to win their game in hand to climb above United in the table while a win for Wolves over City this evening would increase their chances. United have a week off before taking on Crystal Palace in their final game of the season.