How England reached the Euro 2022 final

England’s Lionesses can make history today by becoming the country’s first women’s team to lift a trophy. No England side, male or female, has won a major tournament since the 1966 World Cup which is the only triumph to date after Gareth Southgate’s men’s team lost the final of Euro 2020 at Wembley last summer. But the Lionesses can do what they failed to by delighting the nation and bringing football home against formidable foes Germany.

Germany are eight-time European champions and no other country has won it more than twice. England are two-time runners-up having lost in the 1984 final to Sweden on penalties while they were hammered 6-2 by Germany in Helsinki, Finland back in 2009 when Hope Powell was the manager.

But England’s women are an even better team now than 13 years ago and will be vociferously backed by 90,000 fans at Wembley, the vast majority of whom will be there to roar on the Lionesses. And Sarina Wiegman’s side already know what it takes to beat Die Nationalelf having secured a 3-1 win against them in February to win the Arnold Clark Cup in Wolverhampton.

Germany, though, have conceded just once in this tournament so far while Alexandra Popp has scored six goals as she looks to win the Golden Boot. She is level with England’s Beth Mead – who has scored in four of her five games – with the pair going head-to-head today to fire their countries to glory and to also try and add a personal achievement on top.

FOLLOW THE MATCH WITH EXPRESS SPORT’S LIVE UPDATES BELOW 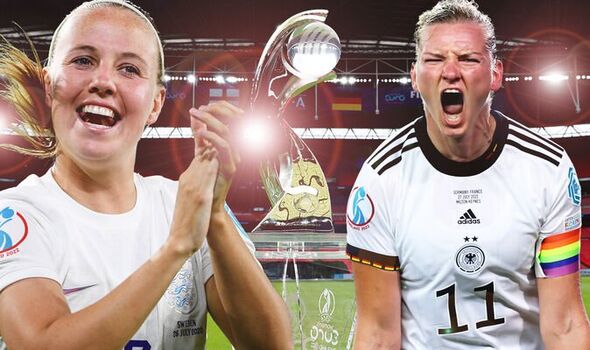 One men’s England player who will be there today is captain Harry Kane, who sent the Lionesses a good luck message earlier today.

“Hi Lionesses, just wanted to wish you all the best for today’s game against Germany. It’s going to be an incredible experience and an incredible atmosphere at Wembley, I can’t wait to be there myself.

“So, I wish you all the best, good luck, go get that win, the whole country is behind you, we’re behind you.”

The England players have been sent messages from around the sporting world, including from Formula One driver George Russell who just finished third for Mercedes in the Hungarian Grand Prix. He posted: “Best of luck to the @Lionesses today!”

And here’s the Germany starting XI…

That means like England, the eight-time Euro winners are unchanged.

The England starting eleven is IN!

That means the Lionesses are unchanged for their sixth and final game at Euro 2022.

It’s the first time a manager has ever done that in a men’s or women’s Euros. 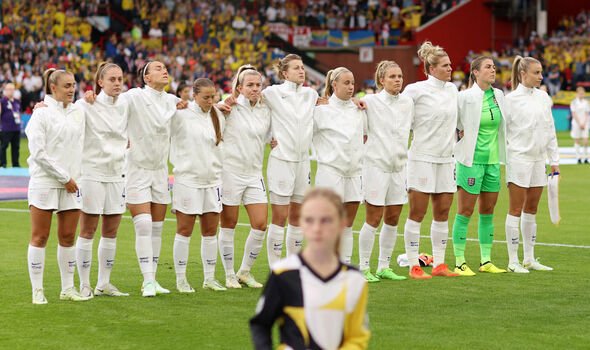 Tickets have been so tough to get for today’s game that even some of the men’s England players have been left disappointed.

“Quite a lot of the England men have been in touch, just wishing us well and asking if they can have a ticket,” midfielder Georgia Stanway said yesterday. “Sorry lads, we’re all sold out!”

A final batch of 3,000 tickets were sold on Wednesday but many fans have been left disappointed with touts managing to get hold of tickets priced at a maximum of £50 to sell them for as much as £1,000 each.

Let’s hope no one does what pro golfer Ian Poulter did last year for the men’s final. Poulter spent £100,000 on seats in a private box for himself and his son but only got into the ground late in the second half.

That was because he had been playing at the Scottish Open and bad weather delayed the time he was able to get off the course to fly from Edinburgh to London.

Today’s match will be a sell-out occasion with 90,000 expected to pack into Wembley to witness the final.

That will mean the record of the highest attendance in the competition’s history, 68,871 which was set when England beat Austria in their first group game this year, will be smashed again.

Big screens are being set up around the country for the punters who couldn’t snatch tickets, including in London’s Trafalgar Square in London and Manchester’s Piccadilly Gardens.

It’s also anticipated the BBC audience could break records. Currently, the highest figure of viewers was a peak of 11.7million when England were beaten by the USA in the World Cup semi-finals in July 2019. 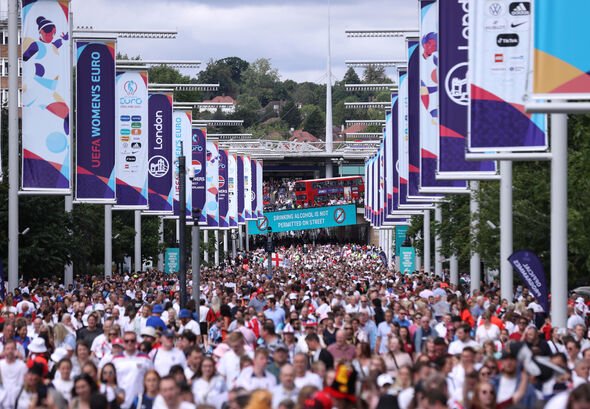 England take on Germany as the Lionesses look to win the country’s first football trophy since the men won the World Cup in 1966, and what would be the women’s first ever triumph.

The match takes place at Wembley with England set to be loudly backed inside their home stadium. Kick off is at 5pm.

Until then, we’ll have all the build-up you need including confirmed team news which will come shortly.