‘Coffee shop talk’: Why Milicic is ignoring the hype around Macarthur FC

Macarthur FC have made a dream start to life in the A-League, but coach Ante Milicic has dismissed talk of them contending for silverware in their inaugural season as banter that belongs in a "coffee shop".

While delighted with the Bulls’ 1-0 victory over the Western Sydney Wanderers in their first match on Wednesday night, Milicic was eager to ensure his team was not caught up in the hype. 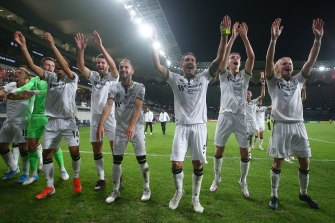 Macarthur FC celebrate their first win in the A-League over the Western Sydney Wanderers.Credit:Getty

"I'm actually not having any of it, because I don't know what that's based on. That's just an opinion, it's coffee shop talk," he said.

"We won our first game, there's a lot more games to go.

"Let's not get carried away – the world's shown that there's been a lot of twists and turns and in Australian football, you always get them as well."

The lid might be on for Macarthur ahead of Sunday's home clash against the Central Coast Mariners at Campbelltown Stadium – but the early evidence suggests there is plenty of reason to be excited by the A-League's newest team, who were given the nod in December 2018 to join the competition for this season. 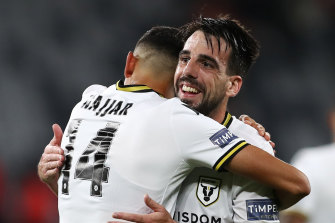 Benat Extebarria came off the bench to provide Macarthur FC’s historic first goal – via the back of Mark Milligan. Credit:Getty

They appear to have clicked already, having enjoyed the majority of possession and seven more shots on goal at Bankwest Stadium than the Wanderers.

Federici was a clear man of the match, and Milicic said the 35-year-old was "still hungry" to prove he could continue to play at a high level having been used sparingly as a back-up in recent years at Stoke City, Nottingham Forest and Bournemouth.

Winger Lachlan Rose, 21, who spent last season with Blacktown Spartans in the NSW second division, caught the eye with an impressive A-League debut.

"We saw something in him," Milicic said. "He's just a kid that really loves the game and wants to get better and he appreciates being in this environment.

"He's the kind of person that's good at football, good at Aussie Rules, good at surfing – he's just a natural athlete. I'm ever so delighted he put in a good performance."

Benat also helped turn the game when he was introduced off the bench midway through the second half, dispatching the free kick that led to the club's historic first goal via a deflection off Milligan.

But it could be a while before he and his former Athletic Bilbao teammate Susaeta are seen at full tilt, with Milicic mindful that they hadn't played senior football since February and March respectively, and only recently emerged from hotel quarantine.

"I'm looking at the loads, but I'm also looking at their age and the kilometres they have in their legs. Obviously the draw, that's changed more recently," he said.

"They definitely have a lot of quality but I'm going with the approach of looking after their bodies. I think there's a duty of care there.

"[I] could have quite easily been tempted to start both of them because they just have that something extra – particularly when they're on the field at the same time. They'll only get better, they'll learn the Australian way, they're still getting to understand it."