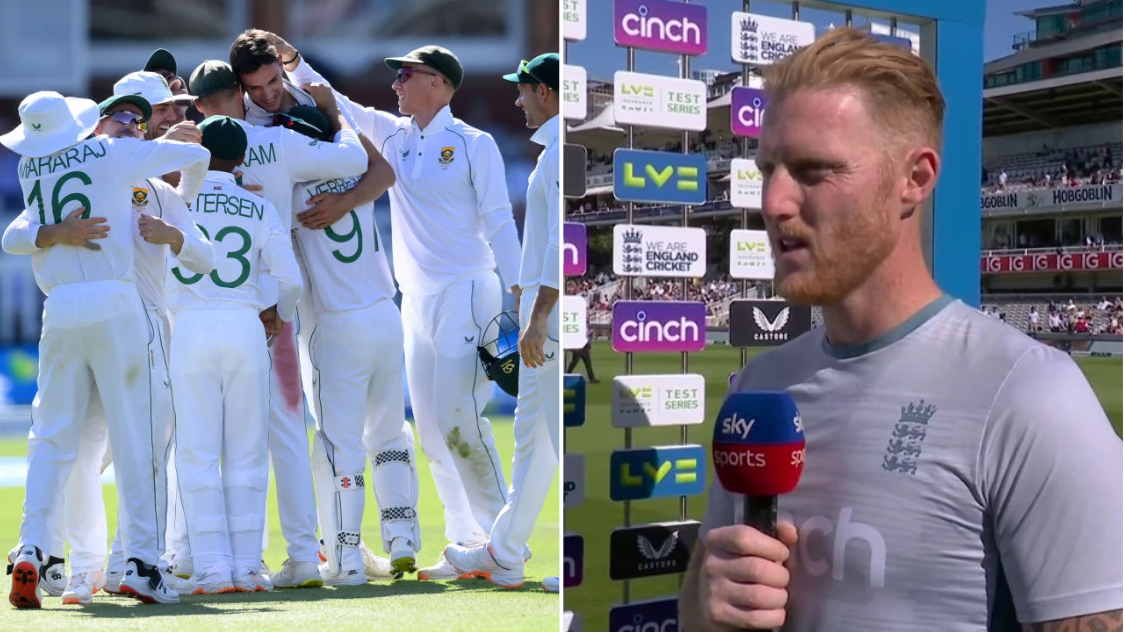 Ben Stokes says England will not change their style of play despite being thrashed by South Africa inside three days at Lord’s, insisting the loss is ‘not a wake-up call’ for his team.

England succumbed to an innings-and-12-run defeat in the opening Test against South Africa after being bowled out for 165 and 146.

It is the first setback of the Stokes-Brendon McCullum era, with England having beaten New Zealand in a Test series earlier in the summer and winning the one-off Test against India in fine style.

‘We’re disappointed to lose. It would be silly for me to say anything different,’ Stokes said after South Africa took a 1-0 lead in the three-Test series.

‘But we’ve got two more games to bounce back from this. We know that when we perform to what we are capable of, we are capable of some incredible performances like we have shown in the previous four games.

‘This isn’t a wake-up call or anything like that. We haven’t been able to execute the way we would like and South Africa were better than us.’

Asked whether the defeat has dented his confidence in England’s style of play, Stokes added: ‘Absolutely not.

‘I look at captains before me, captains after me – they are always going to get criticised at certain times by the way they want to play. That’s just part and parcel of life.

‘The message upstairs is going to be: “did we commit to everything we spoke about before this game?” If everyone can truly say that they did, that’s fine.

‘If we play good cricket, we give ourselves the best chance of winning the game. We’re trying not to be so fixated around the result because we didn’t think about the results in the first four games and it worked out pretty well.’

After bowling out England cheaply in the first innings, South Africa batted themselves into a dominant position on day two, reaching 289-7 at the close to lead by 124.

The Proteas pushed that lead beyond 150 at the start of day three before once again ripping through England’s batting line-up.

Struggling opener Zak Crawley and No. 3 Ollie Pope – who made 73 in the first innings – fell before lunch, while Root was dismissed for a second single-figure score after the break.

The rapid Anrich Nortje then dismissed Jonny Bairstow, Alex Lees and Ben Foakes in quick succession to end any hopes of an England fightback.

‘First and foremost, we need to accept that South Africa played a lot better than us in these conditions so credit where it’s due and we’ve got some work to do in the next few days.

‘But you don’t go from being a very good cricket team a few weeks ago to making wholesale changes. We won’t overreact.

‘Both Stokesy and I are firm about how we want this team to play and the direction that we think we can take it, we just have to polish up a few of those areas.

‘The conditions didn’t allow us to play with that same freedom but that’s cricket, you’ve got to adapt and try to absorb some of that pressure.

‘When you get the opportunity to turn that pressure back on the opposition, that’s when you’ve got to be brave enough but unfortunately, we didn’t absorb the pressure as much as we’d have liked.

‘That’s sport, we’ve been on the right side of it recently but this time we were on the wrong side of it.’

South Africa will look to maintain their dominance over England when the second Test starts at Old Trafford next Thursday.

Proteas skipper Dean Elgar said: ‘I can’t [believe it has finished so quickly] but I think I will when I wake up tomorrow with a hangover.

‘It was a team effort, there were a few standout performances but everyone had played their part, including the guys who weren’t playing. So it is a pretty good squad effort.’