Barcelona may look to sign Paris Saint-Germain star Kylian Mbappe next summer to replace their superstar forward Lionel Messi, according to transfer expert Duncan Castles. Messi wanted to leave Barca in this transfer window but the club would only facilitate a deal if his £630million release clause was activated. However, the Argentina captain is out of contract next summer and is set to leave on a free.

Mbappe meanwhile reportedly wants to quit PSG at the end of the current season and would be open to moves to both La Liga and the Premier League.

Barca and Real Madrid are the two Spanish clubs the Frenchman is interested in.

And Castles says the appointment of a new president, with elections set for March 2021, could spark a huge offer from Barca for the 21-year-old.

Castles said on the Transfer Window podcast: “Barcelona, you have to remember, are dealing with the fall out with Lionel Messi, who almost left this month, and who will be out of contract in a year’s time and could very likely be away and off the wage bill and in need of a replacement in one year’s time.

JUST IN: How Jadon Sancho is behaving in Borussia Dortmund training amid Man Utd interest 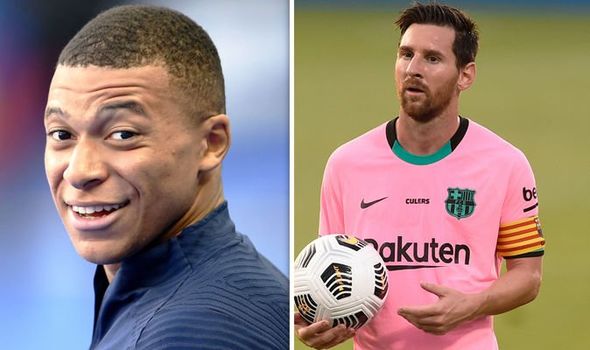 “They also have a new president coming in and we know what happens when new presidents come to Barcelona, they spend big on improving the squad, changing the structure of the team.

“So both of those clubs [Barca and Real] are very much in a position where you’d want them to be if you’re a player of Kylian Mbappe’s quality and you have decided that next summer is the time to make your move out of French football and to La Liga.”

Castles says two other clubs Mbappe is showing interest in are Liverpool and Manchester United.

“[Liverpool have] basically said if you plan to leave, let us know,” he added.

“You could see an opportunity where one of those three wants to leave – particularly [Sadio] Mane or [Mohamed] Salah would raise the biggest transfer fees – and replace them with Mbappe, because his transfer fee wouldn’t be as high as there’s only a year left on his current contract.

“The other club he’s interested in is Manchester United, which I’m sure would be a great appeal for The Glazers and Ed Woodward, to go after a player of his quality.

“It’ll be interesting to see if Mbappe’s interest is such that he’d be willing to go to a team where at present they’re well down the European pecking order.

“We’ll see what happens in the coming season with their cultural reboot, where that gets them and if they’re attractive enough for a player of Mbappe’s quality.”