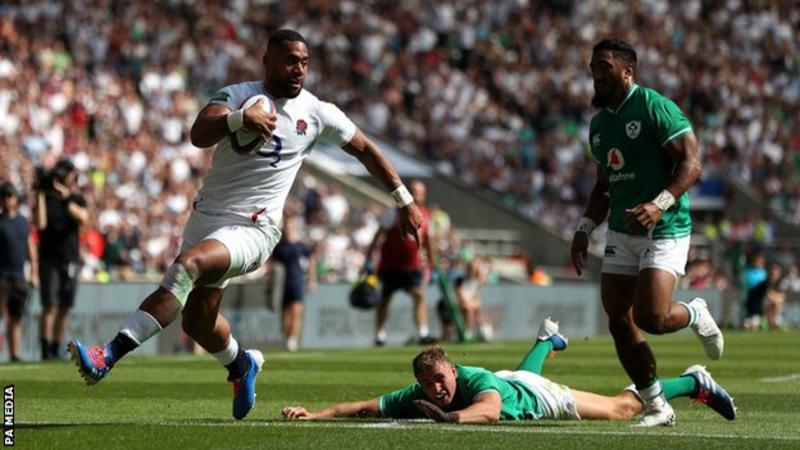 England produced a dominant performance as they continued their preparations for the World Cup by hammering Ireland.

Eddie Jones’s side ran in eight tries at Twickenham to register their largest winning margin against the visitors.

Jones got the response he would have been looking for after England were beaten by Wales in a lacklustre display last week.

In contrast, Ireland looked way off the pace set by the home side and missed the chance to overtake Wales at the top of the world rankings.

Cokanasiga’s well-made first set the standard in sweltering conditions, with full-back Daly crossing on the same flank before Tuilagi powered through the middle from close range.

Itoje capitalised on a loose Ireland line-out shortly after the break and the rampant hosts continued to increase their advantage as Kruis and Curry crossed in quick succession.

Cokanasiga’s converted second took the hosts to the 50-point mark as England laid down a marker with less than a month to go before their World Cup opener against Tonga in Japan.

England coach Jones named the 31 players he will be taking to Japan before England lost in the second of two warm-up Tests against Wales last Saturday and his squad clicked with impressive efficiency as temperatures hit 30 degrees Celsius in London.

The hosts took control in the opening 40 minutes as they responded to Larmour’s opening try by working space wide on the right for Cokanasiga to cross and then made their numerical advantage count with Ireland scrum-half Conor Murray down injured by sending Daly in on the overlap.

Tuilagi, making his first start in the World Cup warm-up Tests having impressed off the bench in both matches against Wales, had set the platform for Daly’s score and soon got the try his performance deserved when he stormed through a gap before the break.

England carried that momentum into the second half as Ireland lost another line-out and Itoje powered past replacement Luke McGrath to score, while Kruis was able to touch down after England kept the ball alive following a Jonny May break.

Jones said there was “no ceiling” for ‘Kamikaze kids’ Sam Underhill and Curry before Saturday’s game and the Australian will have been delighted to see his flankers combine for a superb try as Curry got his name on the scoreboard.

Cokanasiga then came off his wing to grab his second and, after Aki’s consolation, replacement Cowan-Dickie pounced on another Irish overthrow to round off a victory that set records for England’s highest score and greatest winning margin against Ireland.

England have one final warm-up game, against Italy on Friday, 6 September, before they head to Sapporo for their World Cup opener.