When Scottish Rugby chief executive Mark Dodson and chief operating officer Dominic McKay quaffed a glass or three of business-class bubbly en route to the World Cup in Tokyo this week, they already knew that they were flying into a storm. They never anticipated quite how turbulent.

As long ago as October 2, before the pair left Murrayfield in time to be in Shizuoka for Wednesday's 61-0 victory over Russia, a "tropical disturbance" north of the Marshall Islands had already blipped on to meteorologists' radar screens. The next day, Japan's Joint Typhoon Warning Centre issued a formal alert, and by last Saturday, as the Brave Blossoms beat Samoa and claimed the injury-time bonus point that moved Scotland one step nearer the tournament trapdoor, the storm had morphed into a severe tropical storm. And it had a name: Hagibis. 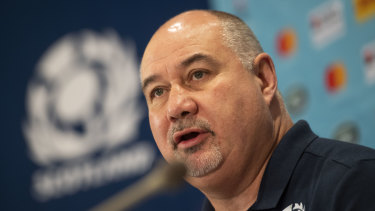 So even as Scotland romped past Russia, the fateful decision to cancel New Zealand versus Italy and England versus France was being taken.

The first person to state as fact that the games were off was PA's Duncan Bech. He tweeted from Japan at 11.30pm on Wednesday in the UK – around the time the last newspaper editions were off to the printers – that: "England's World Cup game against France has been cancelled. Official confirmation expected at 4am BST".

Bech's tweet was sent at 7.30am on Thursday in Japan, but despite World Rugby insisting "the decision to cancel some matches… comes with the support of all stakeholders, including teams", not everyone was on board.

The Italian management were said to be "utterly heartbroken", while the sight of Leonardo Ghiraldini breaking down in tears on the training ground when told of the decision is one of the most heart-rending images of this or any other World Cup. The 34-year-old hooker had spent five months in intensive rehab after a knee injury so that he could end his 14-year Test career by winning his 105th cap with a 20-minute cameo at the end of Italy's match against the All Blacks.

Nor did Italian captain Sergio Parisse, playing his last Test after 18 years and 142 caps, hide his feelings. "If New Zealand needed four or five points against us it would not have been cancelled," he said. "It is ridiculous there was no plan B, because it isn't news that typhoons hit Japan."

New Zealand coach Steve Hansen sympathised, but not to the point of agreeing to postpone their match against Italy. "If we'd had a choice, we would have rather played Friday [instead of Saturday] but it wasn't our choice, it was out of our control. We have to back World Rugby's decision and if other teams miss out, it's unfortunate. But if you want to be really ruthless, then it's all about making sure you win the games on the way through because everyone knew this could be a possibility." 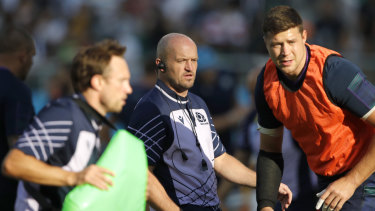 Unhappy Scots: While events swirled around, coach Gregor Townsend clenched his teeth so hard it looked as if he might crack a molar.Credit:AP

As the blame game gathered pace, with World Rugby explicitly denying that New Zealand had any role in the decision, the implications of World Rugby's emphasis on a "one size fits all" approach were not lost on the Scots, for whom a cancelled game would mean the end of their tournament.

Almost as soon as Bech's tweet alerted them to the impending announcement, an "apoplectic" Dodson and McKay entered a series of bruisingly confrontational meetings with tournament director Alan Gilpin and World Rugby chief executive Brett Gosper, meetings which only wrapped up late into the evening.

With emotions running high, the vitriol seeped out into the open. The Scots engaged the services of a razor-sharp QC who questioned World Rugby's understanding of its own regulations as Dodson and McKay insisted the Japan game be put back 24 hours or moved to another venue. 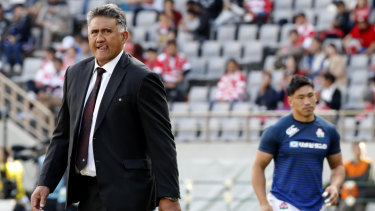 Stirring the pot: Japan coach Jamie Joseph was defiant in the face of Scottish anger. Credit:AP

World Rugby retreated into lectures about precedent. The Italians promised damnation if Scotland were not damned alongside them. Japan coach Jamie Joseph stirred the pot with the acidic assessment: "The key difference between us and Scotland is that my team is motivated by achieving something that is great, not avoiding an embarrassment."

It was hardly an auspicious lead-up to Japan and Scotland's long-awaited pool decider. As they waited to see whether the match would go ahead, Joseph fumed while counterpart Gregor Townsend clenched his teeth so hard it looked as if he might crack a molar. The mood in the Scottish and Japanese camps was of defiance, mixed with despair that rugby's jamboree had been so debased.

Meanwhile two storms raged. Outside, the violence of typhoon Hagibis tore at Japan. Yet, as far as rugby is concerned, it is the devastation to the game wrought by what the Scots at least see as an entirely man-made disaster which may live longer in sporting infamy.