The fire and the spirit: O’Loughlin, Walters, and Thomas delve deep in new AFL documentary

Sydney Swans champion Michael O’Loughlin expects the documentary film written and directed by the co-author of Collingwood’s Do Better report, Larissa Behrendt, to open conversations about the cultural legacies that drive and influence the careers of Indigenous AFL players.

The film Warriors on the Field went deeper than examining the racism he and Noongar man, Fremantle’s Michael Walters, and Kamilaroi and Lumaraana man, North Melbourne’s Tarryn Thomas, endured as youngsters when playing the game they excel at and love. 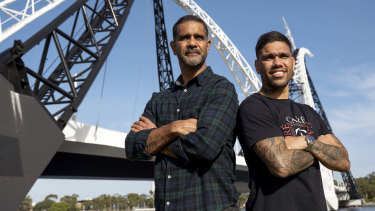 Michael O’Loughlin and Michael Walters are involved in the new documentary “Warriors on the Field”.

It draws out what each Indigenous player carries on the field when they represent not only their club but their ancestors as they acknowledge what their forebears overcame on and off the field and draw strength from their culture.

We are welcomed into the players’ families, with Thomas revealing his shock at being called “a black dog” at school while his connection with his proud grandmother, who died recently, and the rest of his family is evident. Walters says he takes his culture on to the ground with him whenever he plays.

It is an insight into the connections that drove and continue to drive the trio, who know those who went before them strengthened the ground they stand on.

O’Loughlin’s emotions are raw when his Uncle “Muddy” O’Loughlin shows his nephew the certificate of exemption he received in 1951, which allowed him to walk through the main street without being arrested as long as he did not speak in his native language. The document said: “This is your chance to be free of the aborigine protection board and live like a white man.”

O’Loughlin, a Kaurna, Ngarrindjeri man, knew of this history and knew what he was leaving behind when he left Salisbury North for Sydney, but he also knew what he was representing after his mother Muriel told him to take the opportunity he had rather than come home.

He thinks of that advice now as wisdom as he has used the opportunity to not only make a life for himself through football in a country he loves, but his profile as a platform to raise awareness of the racism his forebears endured that went way beyond name-calling.

“I knew it but when he talks about it, I have mixed emotions,” O’Loughlin told The Age. “I am angry and furious. I can’t imagine having to deal with it. It is a real eyeopener.”

Opening eyes is one part of what O’Loughlin hoped to achieve when telling the story, the strength of his family and forebears highlighted as he relives his journey through life as an Indigenous man. From his point of view such a documentary is about “starting conversations” that need to continue.

Tanya Hosch, the AFL general manager of inclusion and social policy, supported the project as a way of enlarging the story behind Indigenous AFL players that is often focused on the issues they may face or the racism they endure.

She said many Indigenous players carry their forebear’s stories with them, which gives them both strength and also creates opportunities for Australians to reflect on a past that includes the history of first peoples and discrimination people such as O’Loughlin’s uncle endured. It’s captured in the Warriors On The Field documentary, which starts on Prime Video on July 8.

“Those legacies follow the players on to the field. They carry that all the time,” Hosch said.

“Often when you are talking to Aboriginal and Torres Strait Islander players and hearing about some of the issues that this playing cohort deal with…they are different [issues] to other players. They are referred to a lot, almost glibly at times. How do we expect people to have an appreciation of that and the layers to that if we don’t have a way to represent it? That is what is special about this film.”