The disconnect between team and club is holding Parramatta back

There has long been a belief within the Parramatta organisation that there is a disconnect between the football team and the club.

No one will publicly admit it, but privately, for whatever reason, head office and the football team don’t sing from the same hymn sheet.

Perhaps years of being based out of different facilities has exacerbated the problem, but reuniting under one roof in Kellyville is yet to fix it.

There is no better on-field leader than Clint Gutherson, but there’s a reason Junior Paulo was handed the co-captaincy, and it’s not all to do with football.

The good teams – like Melbourne, Penrith, South Sydney and the Roosters – are the ones that play for the club, not just themselves. They use that to their advantage in the pressure-cooker moments of finals football.

There’s no doubt, especially judging by their two wins against Penrith this year, the Eels care deeply about the result. But who are they playing for? 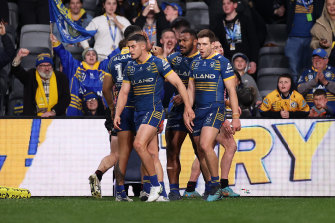 Most of the Eels players couldn’t get off the CommBank Stadium turf quick enough despite pulling off a potentially season-defining thrashing of Penrith.Credit:Getty

The Parramatta fan base is, by extension, part of the club. The difference between the Parramatta and Penrith playing groups was noted after Friday night’s game.

A large contingent of Penrith’s team stayed on the field after full time to take photos and thank their fans. Brian To’o was the last player in the sheds.

The same can’t be said for the winning team. It’s not the first time, either. Most of the players, barring Paulo, Ryan Matterson, Reed Mahoney and Dylan Brown, usually can’t get to the sheds any quicker.

Parramatta is a club with a proud history and the most passionate fans starving for success after four decades without a premiership. It’s the longest drought in the NRL. The Eels could do worse than embracing that, rather than running from it. 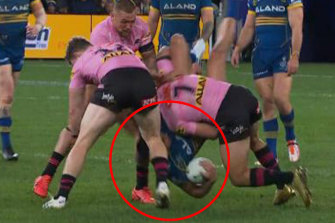 Cleary reaches out after send-off

Nathan Cleary hopped on Instagram after the loss to the Eels to send Dylan Brown a private message.

The Penrith halfback, who will miss the remainder of the regular season through suspension for the dangerous throw on the Parramatta No.6, wanted to apologise for the tackle.

Red V get out the red pen

St George Illawarra will begin compiling a shortlist of candidates to replace the two assistant coaches – Mat Head and Peter Gentle – who were last week tapped on the shoulder by Anthony Griffin.

One name that keeps coming up is former player Trent Barrett. Barrett is managed by Wayne Beavis, who also manages Griffin, and has a long-standing relationship with people in high positions at the club.

Don’t be surprised if there’s also a specific focus on having someone that can develop a close relationship with the young talent at the club. It has been Griffin’s Achilles heel at both the Panthers and Dragons. It hasn’t gone unnoticed. One name discussed is Dragons Jersey Flegg coach Willie Talau.

Melbourne are hopeful Xavier Coates will this week play his first game since injuring his ankle in State of Origin II. 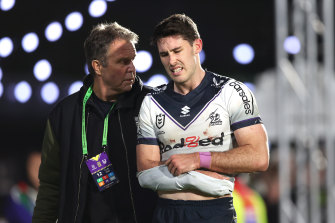 Nick Meaney trudges off Mt Smart Stadium during the Storm’s return to form against the Warriors.Credit:Getty

The Storm have also received good news about Nick Meaney, who left the field against the Warriors clutching at a shoulder. He’s been cleared of any structural damage.

However, he will have to pass concussion protocols to play this weekend.

Last week’s game against Parramatta is the first time throughout Stephen Crichton’s rugby league journey from juniors to first grade that he has missed a game through injury.

It’s an incredible statistic that spans 15 years. Crichton is booked in to meet the doctor on Monday and is firming to return for Penrith against the Raiders in the nation’s capital on Saturday.

He had plastic surgery last week to repair the nasty gash to his ear that he suffered in a collision with Cronulla’s Dale Finucane. He will wear headgear for the rest of the season as the ear continues to mend.

The Panthers will head to the South Coast for a few days this week as part of a team bonding camp on the run home to the finals. They’ll continue on to Canberra for the match on Saturday.

Parramatta have been desperately calling Manly over the past 48 hours to get Marty Taupau to the club immediately.

Manly’s answer to the request for a release remains no, but the Eels will work behind the scenes to try and make it happen before Monday’s 5pm trade deadline.

The Roosters have spent the past few days ringing around all the clubs trying to find an outside back to add to their squad for the run home to the finals.