Membrey: King will be a long-term AFL star

Tim Membrey has declared Max King will be a long-term star of the AFL as the St Kilda forward duo look to help secure the Saints a first finals berth in nine years.

St Kilda will book themselves a spot in the October action with a win over Greater Western Sydney at the Gabba on Friday night, but a loss will leave the Saints needing other results to go their way across the rest of round 18. 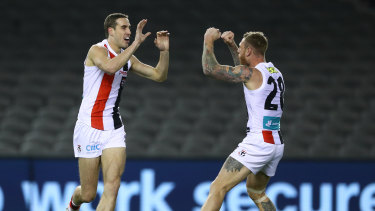 Membrey, 26, has played something of a second fiddle to the emerging King this year, with the No. 4 draft pick of 2018 playing all bar one match this season for the Saints. King made a belated debut in round one this year after missing most of last season through injury.

The St Kilda forward setup has looked vastly different this year compared to last, with off-season recruit Dan Butler leading the Saints' goalkicking this year with 26, followed by King (19), Membrey (17) and Rowan Marshall (12). Marshall has spent more time up forward this year following the acquisition of Paddy Ryder, with whom he has shared ruck duties.

King has had a quiet few weeks, being held to just three disposals and a goal against Melbourne, rested against Hawthorn and then kept goalless in last week's loss to West Coast.

But Membrey said what King had achieved in his first full AFL season had been eye-catching. 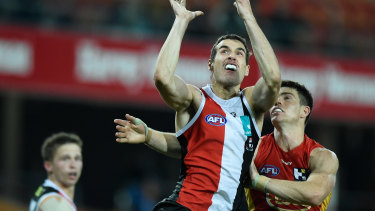 “It’s been good, getting Maxy exposed to AFL footy. There’s no better way than being the No. 1 target for us. He’s going to definitely grow in that area. He’s still only 20 years old, he’s got plenty of footy in him," Membrey said ahead of the Saints' clash with the Giants.

“He’s clearly going to be a star, for a long time. You forget that he’s only 20 years old still. He’s still very young, and he hasn’t played a lot of footy. He only played a couple of games last year.

“It’s been pretty impressive for a young key forward to do what he’s done. But certainly what he’s doing is he’s competing in the air. If he’s not marking it then he’s bringing the ball to ground, and that’s all we ask for."

Membrey said his own role in the team had been somewhat redefined with King entering the fold. 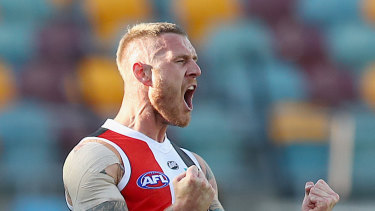 “It’s probably still to support Max and those guys in the air, when I can just [be] more of an outlet, get up the ground and take some marks up on the wing, be that connect player between the mids and the forwards. But at the same time, one of my strengths is still hitting the scoreboard," Membrey said.

“But certainly I’m trying to get big Max up and going as quickly as possible. He’s definitely getting there, that’s for sure."

Coincidentally the only St Kilda match missed by King this season was also the only one in which Membrey was an absentee, with a finger injury keeping the forward out of the Hawthorn game.

Membrey wore a protective guard against the Eagles and said he would likely to do again against GWS, but that he was unfazed by the injury.

“I’ll have to buddy the fingers up together just to protect it a little bit but other than that it’s bounced back really well.

“It’s definitely different. I’ll probably wear [the glove] again this Friday night and then hopefully by then the wound’s well and truly healed and I’ll be able to not have to wear it. But it was fine, it didn’t hamper me too much."

Membrey also said that the likes of Dan Hannebery and Bradley Hill – both of whom have AFL premiership experience – had been beneficial in helping the Saints deal with such a high-stakes match.

“Obviously it’s a big game for the club, and we’re in a position we haven’t been in for a while to be able to win this game and we’re playing finals.

“It’s what you want to be a part of, you don’t want to shy away from it. I haven’t played finals, so that’s something I want to do in my career and potentially contend for a premiership.

“Some boys might be a little bit more nervous. I certainly don’t know what I’ll be feeling before the game. It’s just enjoying the moment, don’t play the game too many times before you get there."