It’s over! Latrell Mitchell to be unveiled as South Sydney signing

South Sydney are expected to finally unveil Latrell Mitchell as their new signing at a media conference at Redfern on Monday afternoon — on a one-year deal worth less than what he was offered to stay at the Roosters.

Contrary to reports elsewhere, the deal is exactly the same as the one tabled by Souths a fortnight ago: $600,000 for this season with an option the club’s way for a second year worth $800,000. Souths have until June 30 to decide if they want to exercise that option. 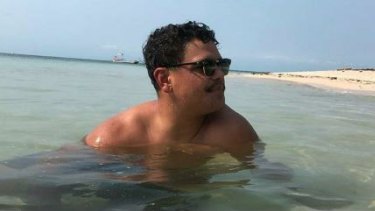 Latrell Mitchell relaxes on the Great Barrier Reef last year, as he contemplated his future.Credit:Instagram

Mitchell has already been paid $117,000 by the Roosters, who had asked for the money back when they learned last week he had agreed to join Souths.

They eventually walked back from that demand, although in reality they were simply trying to turn the knife on their foundation club rival.

In the end, Roosters chairman Nick Politis decided he wanted the melodrama surrounding the 22-year-old to be over. If not, Mitchell would have been required to front Roosters training on Monday after giving him last week off.

So, at 3.30pm on Sunday, the club at which Mitchell won two premierships released him from the final year of his contract.

While nothing has been certain in this protracted affair, Mitchell is due to sign his new deal on Monday morning before it is submitted to the NRL salary cap auditor.

He won’t train with Souths but will then front a media conference with coach Wayne Bennett in the afternoon, drawing the curtain on one of the messiest and drawn-out contract negotiations since Manly captain Daly Cherry-Evans backflipped on his Gold Coast Titans deal.

It remains unclear which position Mitchell will play, although Souths officials deny rumours they have verbally agreed to play him at fullback — not least because he would not be fit enough given his extended off-season.

His usual position of centre seems most likely for the start of the season.

Souths already have a quality fullback in Adam Doueihi, who has been strongly linked in recent days to a possible move to the Tigers. It is understood the Tigers approached Souths about releasing him last week but the offer was rejected.

Melbourne have also expressed an interest in Doueihi but Souths denied that request, too.

With Mitchell secured, the Rabbitohs will then return their focus to getting Titans forward Jai Arrow a season earlier, after they signed him to a four-year deal from 2021 following the retirement of captain Sam Burgess.

And if they do, they will surely challenge the Roosters and Raiders as premiership favourites having added two quality representative players to their squad.

Nevertheless, questions will be asked about the lack of security Mitchell’s new deal brings the player.

Specifically, was his decision to test the market after quickly rejecting the Roosters’ first offer a prudent one? How well has he been advised?

The Roosters offered Mitchell a two-year $1.6 million extension on his current deal, while the Tigers had dangled a $4m offer over four years in front him as far back as November. He also met with Cowboys and Gold Coast.

Agreeing to a second term with an option the club’s way is the most baffling: if he suffers a serious injury, a dip in form or Souths can’t find enough salary cap space for 2021, he will be cut adrift and on the hunt for another club.

A quality player of that ability should be OK, but that depends on how he plays and his fitness.

The process has been delayed by confusion about who actually manages Mitchell, who dumped Steve Deacon midway through last year before signing with Wayde Rushton, who was then replaced by boxing promoter Matt Rose last week.

As revealed by the Herald, Mitchell agreed to terms with Souths before he and his father, Matt – who also briefly played with the Rabbitohs – met with Souths co-owner Russell Crowe at the Hollywood actor’s farm on the North Coast last Thursday.

It was reported that Mitchell knocked back an offer from Crowe, but that has been denied by Rose. Crowe does not make offers to players — but he does charm them.

“Yes, he met with Russell Crowe but he didn’t give him offer,” Rose told The Sun-Herald. “He met with him, he went and met Russell on his property, but they didn’t talk nothing of a deal, he just wanted to meet him talk to him about Souths in general.”