Birchall’s priority is to revive career with the Lions

Ravaged by injury over the past three years, all Grant Birchall wants from his move to Brisbane is to revive his AFL career.

The four-time premiership player joined the Lions as an unrestricted free agent in October's trade period after 248 games for the Hawks. 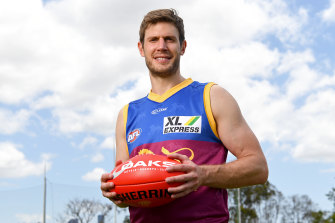 "It has been a real grind being in rehab and I thought a fresh, new environment would do me the world of good.

"And Brisbane have a good track record of getting their players out on the park."

Birchall played in the Hawks' 2008 and 2013-15 premierships but has been ravaged by injuries, managing just eight games in the past three seasons.

The Lions have done well turning around the fortunes of recruits with previously chequered injury records.

He went on to make 24 appearances for the Lions in 2019 including the club's first finals matches in a decade.

"I feel that with a full pre-season with Brisbane I am confident that I will get my body right and be able to get out on the park and make a contribution," Birchall said.