The AFL has released the fixture for its inaugural “Gather Round”, to be held in South Australia next year, with the 18 clubs scheduled to play matches across three venues.

Adelaide Oval, Norwood and Mount Barker in the Adelaide Hills will all host games, as football is concentrated in the state for a festival of footy. Adelaide Oval will host double headers. 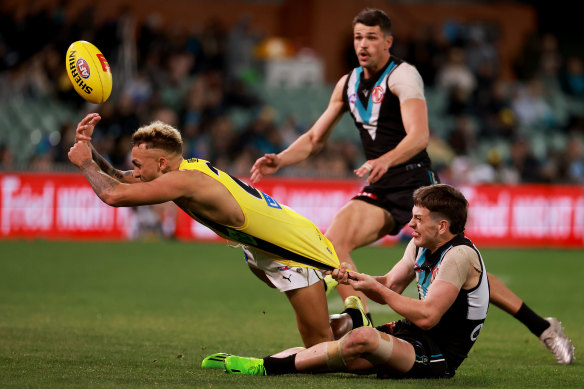 Shai Bolton proved hard to pin down by the Power as he starred for the Tigers at Adelaide Oval.Credit:AFL Photos

All competing club members will be able to attend their team’s game for free, while general public and non-competing members’ tickets will cost $30 for adults, $20 concession (15-18 years old). Children under 15 will be free at all games.

Travis Auld, the league’s general manager of clubs, broadcast and fixturing, said the extra round had added complexity to the 2023 fixture, but the league was excited about the gathering of all clubs and their fans in one place for a celebration of the game.

“From a fixturing point of view adding an extra round adds a layer of complexity to the clubs’ match-ups across the season and taking into consideration the days break from the week before and subsequent days break for round six, however we think we have the right mix with big games everywhere you look,” he said.

“The broadcasting of nine matches across three venues – including regional ones – featuring double headers in one city is something that has never been done before, and we have worked closely with our broadcast partners to build a schedule that can not only work for crowds, but also viewers at home who can’t travel to South Australia.”