As 18 AFL senior coaches bade long, uncertain goodbyes to their players this week one coach asked the group of unemployed footballers sitting in front of him to suggest ways that they would cope with the empty weeks and potentially months that lay ahead.

"Practise gratitude," said one. "Others are worse off."

If only the sort of leadership demonstrated in that short comment had been demonstrated publicly by the players and their union during this past fortnight, while life has become increasingly shocking for everyone.

The comment was reflected in practice across the competition where a number of players performed decent private gestures. Notably, more than a handful of well-paid on-field leaders have called their clubs to offer to sacrifice future wages to save the jobs of off-field staff. 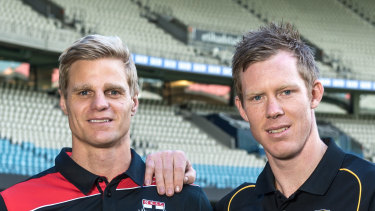 Nick and Jack Riewoldt have had different views on the AFL pay dispute.Credit:Justin McManus

And yet as the world as we know it quickly fell apart the sheltered, micromanaged existence that is the reality for so many professional Australian rules footballers was exposed as they came to terms with their part in the savage cost-cutting.

Perhaps it is more accurate to say the entire game has existed in a bubble of all of our making. But once the AFL's season was called off, the bubble well and truly burst and after close to 80 per cent of the game's workforce was sent home the narrative focused upon the players and their refusal to act quickly to make sacrifices to save the game.

From Gillon McLachlan down, the competition attempted to suggest the acrimony was exaggerated.
On Channel Nine on Wednesday night Collingwood's AFLPA delegate Mason Cox pointed his finger at the media and president Eddie McGuire backed him up, suggesting the reporting pack without games to talk about needed a story.

There was a good reason for all these denials. The last thing AFL bosses, club presidents and players need is for the financially brutalised football-loving public to fall out of love with the stars who put on the show.

At a time when clubs like Essendon writes to their members to inform them that for now their subscriptions will continue to be automatically deducted from their bank accounts, it was all the more galling to hear the players boss Paul Marsh say his members were being asked to stay in shape and that contracts were complex.

But fallen idolatry and loss of love was the impending danger as the week unfolded and the players' mistrust of head office and head office's disappointment with the players was stripped bare.
And not helped by Tom Rockliff's lament about his investment property, Patrick Dangerfield's urge for industrial clarity when everything else about our lives has become so clouded. Not to mention the queue of footballers ill-advisedly pointing to the funds they helped raise for bushfire relief in a bid to illustrate their unselfishness.

Both Rockliff and Dangerfield echoed Jack Riewoldt's unfortunate comments about the bushfire game and certainly Riewoldt would be horrified at being seen to use a good fundraising deed as a weapon in what essentially became an unsuccessful brand-saving exercise for the players this week.
But unfortunately that is how it came across.

The man the players' union named their highest individual award after, Leigh Matthews, last Saturday called for the 18 captains to show leadership and immediately volunteer pay cuts. Three days later Matthews, in a damning follow-up, said he had lost faith in the playing group.

That sentiment was reflected across a number of club chiefs who generally defend players and at a time the game has pledged unity divisions emerged.

Recently retired champion Nick Riewoldt's criticism of the players was at odds with his cousin and football bosses increasingly briefed against not their players but union boss Marsh. Some players said they wished Dangerfield had not appeared on SEN to represent their view.

And Geelong coach Chris Scott hinted Dangerfield was, in fact, taking a position on behalf of the AFLPA when it was not necessarily representative of his personal position.

As players have repeatedly stated this week, nobody likes their wage being cut. And what a political tool it has become for the game.

The game's highest-paid coach Alastair Clarkson was initially resistant to the concept last week when the coaches agreed via a series of text messages to volunteer a wage reduction. He wondered whether such a move was unnecessary grandstanding. But Clarkson came to the party after Nathan Buckley pointed out that showing leadership was important.

Even that move seems a lifetime ago in the context of the game – a time when the coaches still had working assistants and a 20 per cent pay cut looked like a fair offer.

Now the AFL Players Association is facing a much deeper issue. Clubs have been told to expect to operate next season with playing lists of 35 and down to 30 by season 2022. At least $3 million will be stripped from football departments and there is the very real prospect of no 2020 national draft.

The game's wage resolution with its players has come as it works to save itself. But once the AFL's existence is assured the rebuilding phase should question the very essence of how young men – when most of them are barely out of school – are recruited into league clubs.

If the draft age – and significantly fewer players will be drafted in the coming years – was raised to 19 or even 20 then then players would enter the game more mature, more resilient and boasting more skills to cope with life later.

The struggle with reality revealed by some in recent weeks might become less of an issue. And the significant resources poured into caring for their mental health could be adjusted accordingly.
Chris Scott, whose brother Brad has pushed for years to lift the draft age, acknowledged while defending Dangerfield on SEN this week that the players were losing the public relations battle but added "now's not a time for PR".

The fact that the AFL and every club has retained significant media communications resources while shedding the bulk of their workforce would suggest otherwise.

The players might have been presented with a stark new deal from the AFL. But they have some work to do in rebuilding their image. And demonstrating to their supporters and sponsors that they truly see themselves as understanding along with the rest of us that the rules have changed.

And it will take more than a high-scoring exhibition fund raiser to achieve that.