Richmond have the confidence and premiership-hardened game plan but the Cats know how to play keepings off. Backing Patrick Dangerfield to star on the stage he has craved and Gary Ablett to get a fitting farewell.
Geelong by 5 points.
Norm Smith: Patrick Dangerfield

Richmond will win because their pressure is elite. They play the ‘wet/slippery” conditions well and when they need to flick the switch they do. They don’t rely on one or two players to step up, they’ve got a number of contributors across the board. Hard to go past Dusty for Norm, but I’ll go with someone different.
Richmond by 14 points.
Norm Smith: One for the backliners, Dylan Grimes. 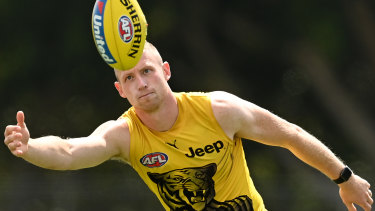 Richmond have the ability to shut down the opposition's strengths better than any club and they have a game plan that is built for winning big games of finals footy.
Richmond by 15 points
Norm Smith: Dustin Martin.

Richmond, because good dynasties are never built without a struggle. The Tigers have never looked flustered throughout the 2020 final series no matter what’s been thrown their way.
Richmond by 9 points.
Norm Smith: Dylan Grimes.

The Tigers will win. Why? The pressure of Richmond's style of game can unwind the possession style of Geelong.
Richmond by 17 points.
Norm Smith: Dylan Grimes.

The Cats have played spellbinding football over the last fortnight but the jury is out as to whether their small forwards can get the better of the Tigers' defence.
Richmond by 21 points.
Norm Smith: Dustin Martin.

The Cats have peaked at the right time of the year and if they can get decent supply to Tom Hawkins and Patrick Dangerfield, they might prove too strong for the Tigers. Danger to kick 3+ goals.
Geelong by 10 points.
Norm Smith: Patrick Dangerfield.

With a plan to score refined after their round 17 touch-up, and the personnel to execute it, Geelong can win if they match Richmond around the ball and then kick straight.
Geelong by 7 points.
** Peter Ryan is on the AFL's Norm Smith voting panel this year

This one is destined to be close. But I have a good feeling about the 2020 Geelong outfit, one of the oldest teams in history, which has handled the season with aplomb. A great farewell for Gazza, a reward for sustained excellence and an emotional night for Danger.
Geelong by 10 points.
Norm Smith: Patrick Dangerfield.

I think the Cats' defence will keep Richmond to a low enough score to allow them to win.

I hesitate to tip anyone, because I've been so woeful tipping any winners this year. Wouldn't a draw just top off the year? Yes, it would.A draw, but Geelong by 6 points in extra time.Norm Smith: Mitch Duncan.

Richmond's ability to defend behind the ball and then use speed on the rebound is the critical factor against a formidable Geelong, who need to get past Dylan Grimes and Nick Vlastuin. Tigers just.
Richmond by 10 points.
Norm Smith: Shai Bolton.

In a genuine battle of two heavyweights the Tigers’ system should prove too good for the Cats. Their defence is rarely beaten, their midfield is back to full strength and it’s tough to split the two key forwards. The reigning champs at their best should be too strong for the romantic contenders.
Richmond by 17 points.
Norm Smith: Noah Balta.

Winning form is good form. Geelong would have beaten Port Adelaide in the first final except for bad kicking at goal, and were utterly convincing beating Collingwood and Brisbane. There is a sense of mission about the Cats that not even Richmond's swarms might be able to resist.
Geelong by 13 points.
Norm Smith: Joel Selwood.