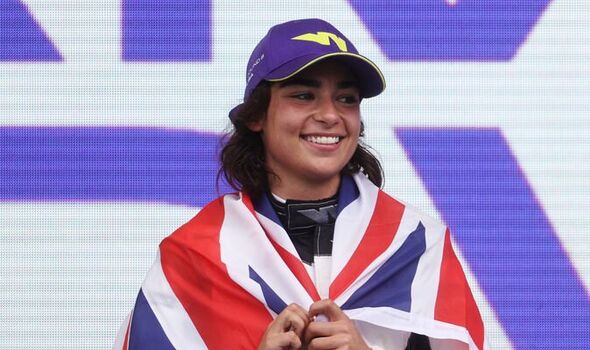 Jamie Chadwick is well-versed in the highs and lows of flying the flag for female participation in motorsport. The 23-year-old, who has been part of the Williams Racing Driver Academy since 2019, has lofty ambitions to kick on from W Series dominance to the star-studded F1 grid. But the road to the top is somewhat more complicated when there are only 20 seats up for grabs, four of which are already held by world champions past and present, in a male-dominated arena.

Chadwick has been on motorsport fans’ radars for some time, and her 100 per cent record of two championships in two W Series seasons is a testament to her immense talent behind the wheel. Many were surprised to see her return to the W Series for a crack at a third title rather than make the natural step up to F3, but funding issues have made life difficult in a complex and lucrative sport.

The path to the F1 grid is a tough one to tread at the best of times, but Chadwick proudly plugs away with extra eyes in her direction and weight on her shoulders due to the hope that she can break the female F1 duck. Indeed, the Bath-born star will need no reminding that Lella Lombardi was the last woman to line up for a Grand Prix way back in 1976, and the sport is crying out for diversity.

“If I make it, [the added attention] is a good thing, if I don’t then it’s not,” she told Express Sport. “I shouldn’t be carrying the weight of women in the sport. If I do go into F3 or F2 and don’t succeed then that should not reflect on women in the sport and their ability.

“I can guarantee there are many talented young drivers coming through that deserve the opportunity every bit as much as I do. In that sense, I shouldn’t be carrying that responsibility. But as someone trying to pave a path and show what’s possible in the sport, I want to show young girls coming through that they do have opportunities to progress.”

The steps beyond W Series are clearly defined, but leaping from one to the next is much easier said than done. Still in her early twenties, Chadwick has plenty of time to get there and has joined up with Jenner Racing, spearheaded by team principal Caitlyn Jenner, for the 2022 season. Fans don’t have long left to wait as the first race of the campaign gets underway in Miami this weekend.

Williams boss Jost Capito has gone on record to say that stepping up to F3 and beyond is crucial for Chadwick’s F1 dreams, and she is under ‘no illusions’ that he is correct. This year, generating funding and support is crucial to Jenner Racing’s newest superstar so that she can fulfil the aim of propelling her promising motorsport career to the next level.

By her own admission, Chadwick was sceptical about an all-women racing series to begin with, but since then it has served to keep her F1 fire burning. Ties with Williams bring plenty of incentive to keep winning, and having previously labelled Lewis Hamilton as her ‘dream team-mate’, she will have to do just that.

“When W Series came about and I started having opportunities in single-seaters and success along with it, this F1 dream came alive,” added Chadwick, “Now it’s very much at the forefront of what I’m trying to achieve. Fortunately, my role within Williams and experiences I’m able to have at this point in my career, it does feel like an achievable goal.”

As she says, drawing the attention that comes with flying the flag for women in male-dominated sport comes with its benefits and drawbacks, but the true impact of her journey is likely to be significant already. An outspoken advocate for diversity in motorsport, Chadwick also hopes for a demographic evolution behind the scenes which should speed up change.

“If you see a work environment of any description and you’re the only female in that environment, it can be daunting and off-putting,” she admitted. “I’m sure there are young, female mechanics and engineers that would be put off by that. So the sooner they see more women in those roles, others will get involved and it’s all part of making the sport more diverse and encouraging that kind of environment for everyone.”