Lewis Hamilton will be hoping to impress the capacity home crowd at Silverstone by achieving a podium finish in front of his own fans at the end of today’s British Grand Prix. The Mercedes driver will have plenty of work to do, though, in order to pip the likes of Max Verstappen, Charles Leclerc and Sergio Perez over the course of the 52-lap contest.

Hamilton will start fifth after lapping quicker than his Silver Arrows team-mate, George Russell, during the final stages of yesterday’s rain-soaked qualifying session. The 37-year-old won last year’s race at Silverstone but only looks to have an outside chance of making the podium today due to the superior pace of Red Bull and Ferrari at the home of British racing.

Carlos Sainz, meanwhile, will line up at the front of the grid after securing his first ever pole position with a stunning lap in yesterday’s wet conditions. He will be closely followed off the line by Verstappen, who currently leads the Drivers’ Championship by a healthy margin of 46 points and will fancy his chances of yet another Grand Prix victory this afternoon. 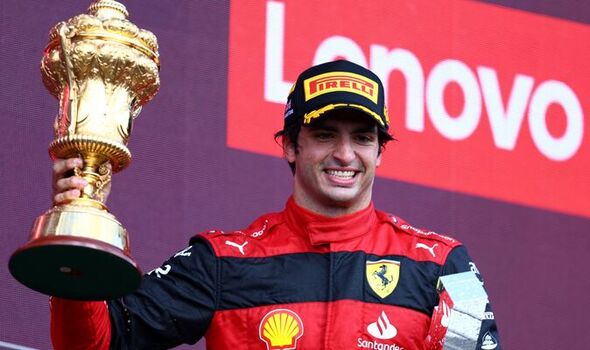 Carlos Sainz managed to grab a surprise pole position at the British Grand Prix ahead of Max Verstappen at the end of a rain-soaked qualifying session on Saturday afternoon.

The Ferrari driver sparked huge cheers from the capacity crowd in attendance by going quickest with his final run of the day to secure his first pole in Formula One in dramatic fashion.

Charles Leclerc will line up in third place when the five red lights go out after losing traction in a close call on his last lap in Q3, with Sergio Perez set to start from fourth.

Lewis Hamilton, meanwhile, appeared to be in the mix for pole but was only good enough to claim fifth position ahead of Lando Norris, Fernando Alonso and George Russell in sixth, seventh and eighth respectively.

Catch up on the full story from qualifying here.

Helmut Marko has already kicked off the war of words between Red Bull and Ferrari this weekend by accusing Charles Leclerc of hampering Max Verstappen’s lap at the end of Q3 yesterday afternoon.

The Ferrari driver lost control of his car at the Chapel curve, ultimately forcing Verstappen to abort his final run through sector two.

“We were so dominant,” said Marko when quizzed on what happened by Sky Sports F1.

“There were yellow flags, so he had to go off the gas. That cost us pole position. We were so dominant and then something like this happens.”

Hello and welcome to Express Sport‘s live coverage of today’s British Grand Prix, with Carlos Sainz set to line up on pole position this afternoon.

The Spaniard will face a tough task in keeping the likes of Max Verstappen and Charles Leclerc at bay, though, as he goes in search of his maiden F1 victory around the twists and turns of Silverstone.

The capacity crowd in attendance will be throwing their support behind Lewis Hamilton, who starts fifth but will be desperate to make up some ground in order to join the podium celebrations in front of his own fans.

Lando Norris, George Russell and Alex Albon will also be vociferously backed by the British supporters as they look to impress on home soil over the course of today’s 52-lap contest.

We’re just an hour away from lights out and will be keeping you up to date with all the on-track action at Silverstone as it unfolds.