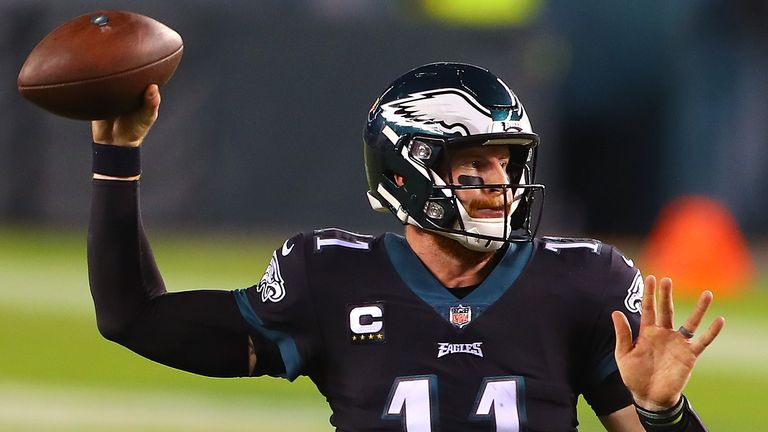 Carson Wentz led Philadelphia on a fourth-quarter rally to overturn an 11-point deficit and beat the New York Giants 22-21 to take over top spot in the NFC East.

Wentz threw an 18-yard touchdown pass to Boston Scott with 40 seconds remaining, and the Eagles defence followed up with a strip-sack of Daniel Jones to complete a remarkable recovery after the Giants had led 21-10 with seven minutes remaining.

The injury-ravaged Eagles had lost another crucial part of their offense earlier in the day with tight end Zach Ertz moved to injured reserve but Wentz still managed to find a way.

He connected with Greg Ward to cut the score to 21-16 and despite failing with a two-point conversion, with two minutes left, the Eagles got the ball back and drove downfield for Scott’s touchdown before Brandon Graham sealed the win when he forced Jones’ error.

Wentz threw for a season-high 359 passing yards and ran in for a rushing TD as Philadelphia won its eighth consecutive encounter against New York and moved top of the NFC East, a division that sports a combined 6-19-1 record.

There were positives for the Giants as their lacklustre offense finally got going. Golden Tate scored against his former team and wideout Sterling Shepard had a TD reception in his return from a four-game absence caused by turf toe, while quarterback Jones mixed the good with the indifferent in his second year as the starter.

Philadelphia, who rallied to cause the Ravens a scare last week and are making a habit of late comebacks, got off to an uncharacteristically fast start, with Wentz running to convert a fourth down before scoring from one yard out to cap an 11-play, 75-yard drive.

The touchdown marked the Eagles’ first points on a game’s opening drive since their season-opening 27-17 loss to the Washington Football Team more than a month ago.

New York answered to forge a tie, with Tate fending off cornerback Cre’Von LeBlanc for a 39-yard touchdown reception.

Early in the third quarter, Jones scampered around right end for 80 yards before he tripped without contact. Wayne Gallman allowed Jones to laugh about his miscue after scoring a one-yard touchdown three plays later to take the Giants to a 14-10 lead.

Giants cornerback Logan Ryan deflected a pass intended for tight end Hakeem Butler on a fourth-and-goal play to thwart a drive at the New York three-yard line and the Giants then drove the length of the field before Jones connected with Shepard for a two-yard touchdown with 6:17 left in the fourth and a 21-10 lead.

Wentz found Greg Ward for a three-yard score 1:39 later to trim Philadelphia’s deficit to 21-16, but the quarterback was denied on his rushing bid for the two-point conversion.

With time running out the Eagles kept the Giants out to allow for one last drive that was complete when Wentz feathered the ball just over the head of New York safety Jabrill Peppers into the waiting hands of the 5ft 6in Scott for the winning score.

Up Next – The Giants are back in action on Monday Night Football on November 2 when they host the Tampa Bay Buccaneers while it’s another NFC East test for the Eagles who host the Dallas Cowboys on Sunday night, November 1.

Sky Sports NFL is your dedicated channel for NFL coverage through the season – Week Seven continues with a triple header from 5pm on Sunday and NFL Redzone so you won’t miss a moment. Don’t forget to follow us on skysports.com/nfl, our Twitter account @SkySportsNFL & Sky Sports – on the go!