LaMelo Ball, possible No. 1 NBA draft pick, to shut it down for the season in Australia

Teenage phenom LaMelo Ball is shutting it down in Australia's National Basketball League.

Ball's manager and trainer Jermaine Jackson told Fox Sports Australia that the 6-7 point guard is "done" and won't be playing again with the Illawarra Hawks after missing the last six weeks with a bone bruise in his foot.

The league's regular season concludes at the end of February, and the Hawks (5-17) are far out of postseason contention, meaning there's little need to rush back for only a two- or three-week return.

"Melo's foot is totally healed, but the doctor's policy is if you're out for six weeks, you must rehab for six weeks," Jackson told ESPN. "He's starting court work tomorrow." 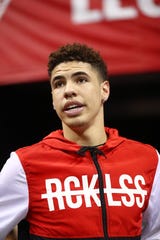 Ball used 12 games in Australia's premier league to legitimately bolster his NBA draft stock after falling off the radar without NCAA eligibility and U.S. exposure. NBA scouts who traveled to see Ball felt the upside he showed against 20- and 30-year-old veterans was enough to warrant consideration for the No. 1 pick in June's NBA draft.

Ball averaged 17 points, 7.4 rebounds and 6.8 assists a game, shooting 38% from the floor while playing in Australia's NBL. Ball only managed 25% from beyond the arc but impressed with his knack for play-making, court vision and triple-double capability.

It's unclear if Ball will remain in Australia for his recovery and training or when he'll return stateside to prep for NBA draft workouts in the spring. His brother, Lonzo, is averaging career-best scoring and shooting averages for the 15-26 New Orleans Pelicans.