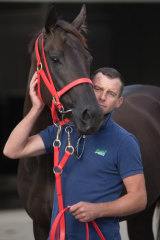 Racing has already taken Adam Trinder around the world but his heart is in Tasmania. Now, the pride of his island home is taking him on another magical ride across Bass Strait.

Mystic Journey, like Trinder, is born and bred in Tasmania, and last start she became the first horse trained on the Apple Isle to win a group 1 in the modern era with a brilliant display against the boys in the Australian Guineas.

"We are pretty parochial and just like me she is a total Tasmanian product," Trinder said. "She was bred and foaled here, bought out of a Tasmanian sale, broken in here by a Tasmanian horseman and trained here."

There are plenty of rags-to-riches tales in Saturday's $5 million All-Star Mile courtesy of its unique fan-voted format, and while some granted a start have little chance, Trinder's filly – who cost just $11,000 as a yearling and already a winner of more than $1 million in prizemoney – ticks both boxes as a feel-good story with class to boot.

While Mystic Journey fits the fairytale, Trinder's previous life as a journeyman jumps jockey plying his trade in Ireland, New Zealand and Japan adds another layer.

It was when based at Nakayama, Japan, that Trinder witnessed the devotion of the nation's obsessive racing fans.

Nakayama Racecourse is the home of the race the All-Star Mile is modelled on, the group 1 Arima Kinen, Japan's most prestigious open-age race for which fans decide the field with a public vote.

She has the whole back of the truck and it's just like a normal night in the stable for her.

Trinder's final race ride was a win for his father Michael in the 2010 Grand National Steeplechase at Sandown before it was time to settle down with long-time fiancee Leah and son Samuel at Spreyton, just outside Devonport on the north coast of Tasmania.

The trainer has stuck to his usual routine for the trip to Melbourne, loading Mystic Journey onto the Spirit of Tasmania on Thursday for an overnight trip to Tony McEvoy's stables at Flemington.

"We are actually very close to where the Spirit of Tasmania departs," Trinder said. "It works best for us compared to the logistics involved in flying.

"She has the whole back of the truck and it's just like a normal night in the stable for her."

If Mystic Journey runs well, as expected on Saturday, Trinder will consider a trip to Sydney for the second day of The Championships.

That is the day Winx is set for her swansong in the group 1 Queen Elizabeth Stakes but Trinder has no intention to tackle the champion mare with 'the Winx of Tassie'.

"She is only young and we want her to be racing when she is four or five and we would love to give her opportunity in a Cox Plate in the spring," he said.

"This could very well be her last assignment for the autumn. If she goes again she will go for the Coolmore Legacy against her own sex.

"I think we would definitely be avoiding Winx."