Pucovski to make call on mental wellbeing before SCG Test

Australia's selectors will trust Victorian young gun Will Pucovski to make a call on his mental wellbeing for the third Test, as the team enters the new year with its top order in a jumble.

The Australians are aiming to have clarity by the end of this weekend when they will have put injured openers David Warner and Pucovski through their paces for possible call-ups in Sydney. 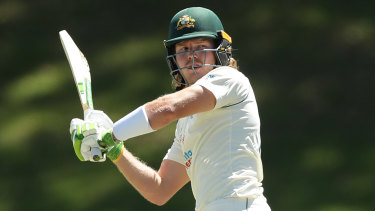 Will Pucovski is in Australia’s squad for the third and fourth Tests.Credit:Getty

He has taken time out of the game three times in the past two years citing mental wellbeing issues relating to concussion.

"[I] think there will be a bit of trust put into the player around whether he’s mentally ready and clearly it will be up to the coach once he lays eyes on him to see where he’s at in terms of being skill ready," McDonald said.

"That’s the other thing, too, there’s always a question around whether you're mentally ready or physically meet the protocols, but is he actually ready, skill ready on the back of a short preparation?

"It will be the first time, if he was selected, that he would be going from first-class into the Test arena, which is always a difficult leap for players to make.

"There’s a few ways there for the selection panel to consider but history would suggest that he says he’s right to perform, he’s done it a few times and had a good return, so [I] suggest there will be trust put into the player if he was considered."

If Warner and Pucovski both prove their fitness, the pair could form a new opening combination, which would allow Matthew Wade to slip down the order, possibly at the expense of Travis Head.

There were murmurs the duo were the selectors' first-choice openers after Joe Burns' run of outs in the Sheffield Shield before injury struck. Should both fail to prove their fitness, Victoria's Marcus Harris would likely come into the XI to replace Burns. A pairing of Warner-Wade is also some chance.

"There's a few moving parts there to work through and on the second and third I think we'll get some real clarity on where everyone is at," McDonald said.

"And the earlier the selection panel or the head coach can make that decision they'll be looking to make it as early as possible to settle things down as well."