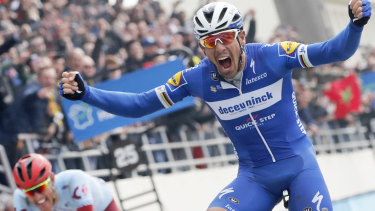 Belgian Philippe Gilbert, riding for Deceuninck–Quick-Step, claims the ‘Hell of the North’.Credit:AP

The former world champion, who has won the Tour of Lombardy twice, the Tour of Flanders and Liege-Bastogne-Liege, beat German Nils Politt (Katusha) in a sprint finish in the Roubaix velodrome with his teammate and compatriot Yves Lampaert coming home third.

The Milan-San Remo, in which he has twice finished third, is the only one-day Monument he has not won.

Rik Van Looy, Eddy Merckx and Roger de Vlaeminck have won all five Monuments while Ireland's Sean Kelly was the last man to win four in his career, when he won Milan-San Remo in 1986.

"It's hard to believe. I was ill before the Tour of Flanders last week but I trained very well and I was feeling the form was there," said Gilbert, his face covered in sweat and dust.

"I've always wanted to win all the Monuments, and I'm getting closer now."

He took the opportunity to silence his critics: "A lot of people thought riding on the cobbles was too hard for me."

Gilbert, also a Tour de France, Giro d'Italia and Vuelta stage-winner, was one of the main attackers of the day, making his first move about 70 kilometres from the finish.

There were six riders fighting for victory with 48km left after the 36-year-old was joined by Politt, Wout van Aert, Peter Sagan, Sep Vanmarcke and Yves Lampaert.

One of the pre-race favourites, Belgian Tiesj Benoot, abandoned after crashing onto the rear window of a team car as he was chasing the pack following a mechanical problem.

With Sagan expected to be the fastest in a sprint finish, his opponents tried to shake him off, Gilbert accelerating first 22 kilometres from the line.

The Slovak followed, as well as Politt, but the move was fatal for Van Aert, who paid for his efforts after a mechanical problem, a bike change and a crash earlier in the race. Lampaert and Vanmarcke closed the gap on a cobbled sector.

Gilbert brutally accelerated again on the Carrefour de l'Arbre, one of the most feared cobbled sectors, and Lampaert was immediately dropped.

In the Gruson sector, it was Politt who made his move with only Gilbert able to jump onto his wheel.

With much more experience than his 25-year-old opponent, Gilbert easily won the sprint to give his team their second Monument title of the season after France's Julian Alaphilippe won Milan-San Remo last month.