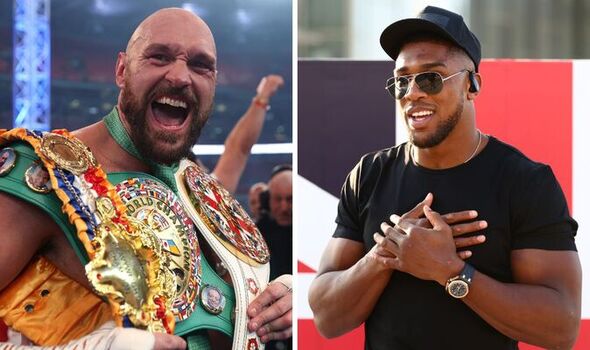 Tyson Fury has offered to train Anthony Joshua for a second time after slamming his rival’s appointment of new coach Robert Garcia. The two-time heavyweight champion, who will rematch Oleksandr Usyk in Saudi Arabia in August, has made the bold decision to ditch ex-trainer Rob McCracken, to team up with the highly-respected 47-year-old.

Fury doesn’t believe it’s the right fit given that Garcia will ask Joshua to go hell-for-leather for 12 rounds.

Instead, he believes Joshua may have shot himself in the foot in his pursuit of redemption.

“Without trying to slate AJ or anything, because he has done well, he has had a great career, he doesn’t have the engine to do that for 12 rounds,” Fury told Queensbury Promotions.

“He doesn’t have the grit or determination to do that.

“So unless he comes to Morecambe and lets me train him for this fight, I see another loss, to be fair. If not, he gets another ‘L’ on his record.”

Fury had jokingly offered to train Joshua for the rematch when it emerged he was exploring the proposition of a shake-up in his corner.

And now the WBC heavyweight champion has doubled down on the proposal, suggesting he is genuinely serious about helping Joshua regain his belts.

He added: “I’ve a lot of experience in the game at all levels.

“I have got a lot of experience with the lawyers and management side and all that stuff.

“The last three or four years I’ve been managing my own career and doing what I’ve got to do.

“I’ve done it all myself so I’d definitely be a good asset to anyone who wanted my help.

“I’ve been looking after Joseph Parker for the last year or so, two years, and he has come on leaps and bounds, we’ve got him some good deals, so it has been pretty good.

“So I never say never with training people, although what I expect from people sometimes doesn’t exist.

“I want to train everybody like I fight, and if you ever trained anyone to fight, it would be a case of, ‘Do not do anything Tyson Fury does’.”