AFL players will insist on a regime that supports them, rather than punishes them, when the AFL and the players agree upon a revised policy for dealing with illicit drugs.

Speaking after the Bailey Smith incident, the AFL Players Association said a revised illicit drugs policy had to remain confidential and “not punitive” for the players to support a change in the system. 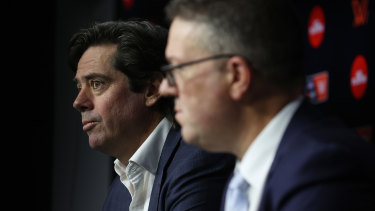 AFLPA chief executive Paul Marsh said “a medical model” that supports the players “is still going to be our starting point” for the next version of the drugs policy. The AFL is reviewing the current policy, amid criticism from club figures such as Bulldogs coach Luke Beveridge and Hawthorn president Jeff Kennett.

Beveridge had suggested the drugs policy should be scrapped because players with diagnosed medical health conditions are “never going to be exposed to the policy” given their exemption. Kennett called for two-year bans and “zero tolerance” for players who had illicit drug strikes to their names.

Some clubs have also demanded that senior officials, besides club doctors, have access to the information about players who have recorded their first positive tests to illicit drugs. The doctor is currently the only club person notified after the first “detection”.

Marsh countered that the players could choose to inform people at their club that they had recorded a positive test to illicit drugs, and there was nothing to stop players from informing officials inside their club.

But Marsh also highlighted that if a club president had called for two-year bans – as Kennett did (Marsh did not mention the Hawk president by name) – then this would not encourage players to come forward to their clubs. 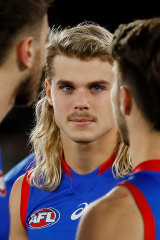 Bailey Smith after the Bulldogs’ loss to Geelong at Marvel Stadium.Credit:AFL Photos

“It doesn’t need to go past the club doctor,” he said.

“There’s lots of players we have helped. The confidentiality in the policy is critical.”

The drug debate follows the emergence last week of photographs showing Smith holding a plastic bag with white powder and a video of him sniffing a substance and then wiping his nose. Smith confessed that he had succumbed to drug use in the post-season of 2021 and apologised for his behaviour.

Under the present policy, players get a four-week ban for a second “detection”, which becomes public, and then a 12-week suspension for a further positive after that.

No player has ever registered a positive test that resulted in suspension since the drugs policy was introduced more than 17 years ago. Players are protected from “strikes” if they have a medical diagnosis of a mental health issue by the AFL and club doctors.

Marsh warned that if there was no AFL policy, then clubs would introduce “their own approaches”, which would vary.

Some might have zero tolerance, while others would take the opportunity “to move players on who clubs want to move on.”

Marsh said players could test positive after making a one-off mistake, or they might have “serious issues”.

“If we don’t have a policy, no one would hear about this,” he said.

“I think there will be different views from different clubs. I think it’s an issue about control.

“We’d like to get to a point where players aren’t taking illicit drugs.”

The players pushed successfully for the AFL to cease making public the number of drug positives recorded over a year in the competition. The league also conducts hair testing to identify the scale of the issue and assist in “target testing” of individual players.

The AFL policy has long been confused with the World Anti-Doping Agency (WADA) testing regime, which is designed to prevent the use of performance-enhancing drugs (PEDs) and is administered by Integrity Australia (formerly ASADA) with tough penalties for using PEDs.

The AFL drugs policy is misunderstood as having a punitive element, when the evidence shows that it is only about treatment and without significant penalties in practice. The AFL’s medical officers, however, have stopped players from playing when they have drug problems, without revealing the reason for their absences.