Australian guard Ben Simmons scored 20 points, 11 rebounds and seven assists to help the Philadelphia 76ers to a 100-89 home win against the Chicago Bulls.

Furkan Korkmaz added a career-high 24 points, including a career-best six three-pointers, while Al Horford also scored 20 points and Tobias Harris 13 as the Sixers played without All-Star centre Joel Embiid for the 12th time this season. 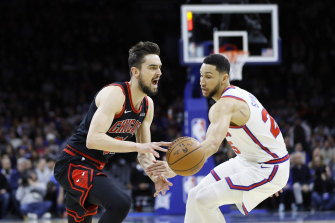 Ben Simmons knocks the ball loose from the Chicago Bulls’ Tomas Satoransky during the Philadelphia 76ers’ win on Friday.Credit:AP

Zach LaVine missed all seven of his three-point attempts but led the Bulls with 23 points, while Coby White added 14.

Marc Gasol added 20 points for the Raptors, who have won seven straight against the Wizards, including two this season. It marked the most points scored in a game this season for Toronto.

Terence Davis II scored 23 points for the Raptors, who have won two in a row.

Troy Brown Jr. had 22 points for the Wizards, who have lost three straight.

Meanwhile, Malcolm Brogdon nailed a tiebreaking 15-footer with 18.7 seconds left and T.J. Warren scored a game-high 28 points as the host Indiana Pacers spoiled the return of Karl-Anthony Towns with a 116-114 victory over the Minnesota Timberwolves to sweep a tightly contested home-and-home series.

The Pacers won 104-99 at Minnesota on Wednesday in a game Towns missed with an illness to continue a string of 15 straight absences after earlier having suffered a knee injury.

The All-Star centre had a team-high 27 points in 28 minutes in his first game since December 13, and was still producing with 1:48 remaining when his two free throws pulled Minnesota into a 114-all tie.

But with the score still tied, Towns committed an out-of-bounds turnover with 1:16 to go and teammate Andrew Wiggins had a similar miscue with 31.3 seconds left, setting up Brogdon's game-winner.

Dillon Brooks scored 26 points and the host Memphis Grizzlies recorded their season-best seventh straight victory with a 113-109 win over the Cleveland Cavaliers, who had Australian Matthew Dellavedova score three points in his 12 minutes of action.

Kendrick Nunn scored 22 points to lead the visiting Miami Heat to a 115-108 win over the Oklahoma City Thunder.