Kings’ streak comes to shuddering halt at 13 after Sixers upset

Sydney sleepwalked their way to their first loss in 14 outings when they fumbled their way to what could be a costly upset to Adelaide on Sunday in a surefire sign that the Kings need the playoffs to start so they can rediscover their intensity. 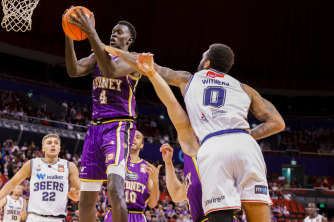 Sydney forward Makur Maker looks to make a play for the Kings despite some attention from Adelaide’s Todd Withers.Credit:Getty

The Kings’ winning streak ended at 13 at Qudos Bank Arena but more importantly, their chances of finishing first heading into the playoffs have copped a massive blow, dropping to an 18-8 record to trail Melbourne United (19-7) with two games remaining for each team in the final round.

Illawarra (17-9) or Perth (16-10) could overtake the Kings with the Hawks taking on their NSW rivals in the final day of the regular season next Sunday.

Former championship-winning Kings guard CJ Bruton returned to haunt his old team, with the rookie coach guiding the unfancied 36ers to a 90-82 boilover, powered by a 22-point haul from import Dusty Hannahs.

After the Kings shot out to an 8-3 lead it looked like eighth-placed Adelaide were in for a tough day at the office, but the visitors hung tough to close the gap to 21-19 by the end of the first quarter.

Sydney slumbered at the start of the second quarter to trail 29-23, prompting Chase Buford to burn a time-out. Dejan Vasiljevic and Jaylen Adams sparked the home side’s comeback with some precision outside shooting to snare a 40-38 advantage by the main break. 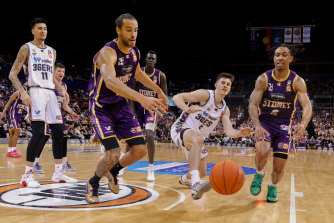 The Kings kept gradually building their momentum in the third quarter on the back of Adams without ever getting out of second gear.

With more than three minutes remaining the match was brought to a standstill when the shot clock and PA system were on the fritz and the crowd of more than 10,000 fans were forced to wait around.

The Kings had been up by eight but when play resumed, their timing was still off and they were on the wrong side of a 14-5 run, capped off by a Kai Sotto three-point play. The 36ers led 62-61 lead heading into the final 10 minutes.

Adelaide are out of the playoff equation but Bruton’s team has not given up the ghost, as evidenced by their upset 82-70 win over the fourth-placed Wildcats in Perth on Thursday.

They kept counter-punching with the Kings in the fourth quarter and with the scores locked at 72-72 midway through the term, it was close but not necessarily entertaining.

A barrage of three-pointers put the Sixers up by 10 heading into the final two minutes – Sunday Dech hit two of them in what was clearly his day.

Adams, who finished with a game-high 28 points, and Cooks, who added 21, gave Kings fans a slight hope of an improbable last-ditch win in the final minute but the Sixers held on for one of the biggest upsets of the season.

The Kings travel to Cairns on Thursday night before returning home on Sunday for the clash with the Hawks which will prove crucial in working out the final four seedings.