Carlton almost blew a 50-point lead as Port Adelaide mounted a ferocious second half recovery to close to within two points in the final term before the Blues steadied to hang on for a three-point win in a frantic, nerve-shredding finale at the MCG.

Port looked dead and buried after Carlton produced a scintillating first half in which they kicked 12 goals.

But the South Australians regrouped and although they could not quite pull off an Easter resurrection, the qualities of fight and belief they showed in a barnstorming second half augur well for the rest of what will almost certainly be a rebuilding season. 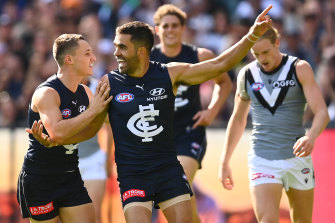 Port they are now marooned at the bottom of the ladder, winless after five games and with their coach, Ken Hinkley, under mounting pressure to turn around a team that many tipped to be right in the finals mix this season.

In contrast, Carlton are well ensconced in the upper echelons with a 4-1 record after five rounds and are gearing up to make the finals after a long absence.

Charlie Curnow had the first word – and the last – in a spirited first quarter which saw the Blues kick six goals to struggling Port’s two, Michael Voss’s men recovering their mojo in fine style after crashing to that surprise loss to the Suns last week.

Curnow was on the board inside the first 60 seconds and the big forward then struck in the dying seconds, goalling from close range.

After being surprisingly beaten in the centre clearances by Gold Coast last week the Blues got back into the groove and dominated from the middle – Hinkley admitting at the first break that his team were getting “smashed” in that area.

Jack Martin was lively in the opening blitz snapping two goals inside three minutes while Zac Fisher also got in on the act.

Mitch Georgiades pulled one back for Port, who were lucky not to concede even more when Jack Silvagni failed to convert an opportunity presented to the Blues when a free kick was reversed near goal.

Carlton snare a goal from the boundary line.

Port were four goals down at the first change, and Aliir Aliir was having a nightmare return to the Port line up, being led a merry dance by both of Carlton’s forwards Curnow and Harry McKay, who dribbled home a shot from an acute angle.

Fisher then produced a goal for the highlights reel when he deftly guided the ball home from the left flank.

Port veteran Robbie Gray was trying to keep his side in it and did get a goal from a free kick, but the tide never looked like turning even though Jeremy Finlayson did pull one back.

Curnow, with his third, and Corey Durdin, restored to the team, added more for the Blues as they piled on the pressure en route to another six-goal quarter.

Port looked ready for the last rites at half-time having trailed at one stage by a game-high 50 points.

But not for the first time in a game there was a massive momentum switch. Carlton had it and lost it. Port were bereft, then found it, kicking six goals in the third quarter (including five in a row) to close the gap to 17 points at the final change.

Sam Powell-Pepper kicked a long snap on the run, Zak Butters followed up, Ryan Burton marked his 100th game with his first goal of the season, Connor Rozee kept up the pressure before Burton goalled again to make it five without reply for Port. Could they pull off the impossible, or would Carlton conquer their nerves and hold on?

Port began the final stanza in positive mood but their wayward kicking did them no favours as they missed a number of convertible chances. However, when Powell-Pepper goaled with more than 12 minutes remaining the great escape was on and Gray’s great mark and goal closed the gap to two points.

But it was Curnow who had the final say, outpointing Allir once more to kick and goal to stretch the Blues advantage to eight points: it was enough to get them over the line even though Port closed the gap once more in a game that will live long in the memory of both teams – especially Port’s debut ruckman Sam Hayes, who saw the best and worst of his team-mates in four quarters.