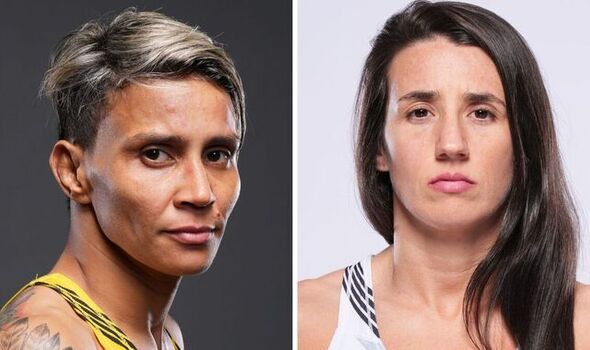 Marina Rodriguez and Amanda Lemos headline UFC Fight Night 214 in a strawweight crunch tie. Rodriguez is currently ranked at No3 while Lemos is placed at No7.

The victor will establish themselves in a very strong position to challenge for the 115lb strap currently held by Carl Esparza who defends her crown against Zhang Weili on November 13 at UFC 281.

Rodriguez (16-1-2) is on a four-fight win streak since losing to the reigning champion two years ago. Big wins over Amanda Ribas, and Yan Xiaonan have established her as a genuine threat to the upper echelons of the division.

Meanwhile, Lemos (12-2-1) rebounded from her loss to Jessica Andrade in April to record a career-best victory over Michelle Waterson. Lemos submitted the MMA veteran in the second round via guillotine choke.

The prelims will start at 8pm UK time with the main card following at 11pm.

The card will air live on BT Sport in the UK, and can be streamed on the BT Sport app and website on all good internet-connected devices including mobile phones, tablets, and smart TVs.

Rodriguez told UFC.com: “What motivates me the most for this fight is knowing that the title will be on the line next week and we’ll know who will possibly be my next opponent. This gives me the confidence and motivation to win this fight on Saturday.”

Lemos to MMA Fighting: “I think it’s a big opportunity for me. If it doesn’t make sense for her, she shouldn’t have taken this fight. She turned down a fight previously [versus Zhang], a fight that would have been crucial for her to go to the belt, and she turned it down.

“That’s on her — I have nothing to do with that. People saying [fighting me] doesn’t make sense — nobody forced her to take the fight. I’m a professional, I’m here.”