During Meg Lanning’s overseas journey of self-discovery after more than a decade at the top of Australian cricket, it was her decision to reach out to a longtime confidant that provided evidence she was ready to return.

In November, a little more than three months after announcing she would step back from cricket indefinitely, Lanning was making the most of her anonymity in San Francisco when she checked in with Rachael Haynes ahead of the former vice-captain’s final professional match. 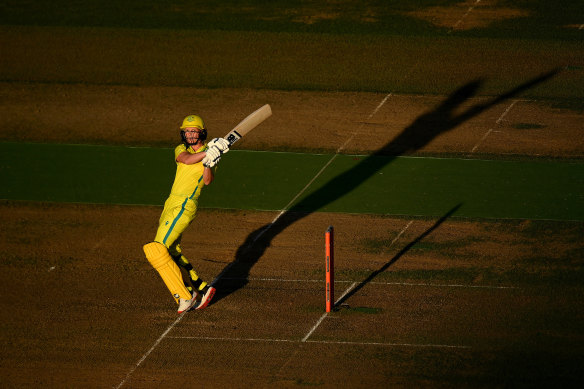 Meg Lanning at the Commonwealth Games.Credit:Getty

Haynes had retired following the Birmingham Commonwealth Games, around the same time Lanning herself was pondering whether to give up cricket entirely.

“She reached out and we were exchanging messages because it was coming up to my last professional game,” Haynes said. “She checked in and asked how I was feeling and I think that’s a really good indication of the type of person Meg is.

“She’s always thinking of others as well as herself. I could just tell from that interaction that she was in a much better space. A little bit of time passed after that, and when she got back to Australia she had time to reflect and recognise she wanted to be part of it.

“The most impressive thing is she’s not just coming back and wanting to re-join and keep things ticking along, she’s all-in and got that real determination to be a better player. I’m sure she’s learnt a lot about herself from this experience, and it’ll make her a better leader too.”

Among numerous pursuits for Lanning during her time away was a stint working in a Melbourne cafe, serving coffees, cleaning dishes and generally enjoying a lifestyle that was worlds away from the structure of professional cricket.

“It just gave me a bit of a different perspective on things,” Lanning said. “Going in not really knowing what the day is going to look like. It could be busy, it could be quiet, and just having different conversations with the customers and things like that, I actually found that really cool.

“Just having that little bit of freedom, a little less structure around what I was doing and going with the flow a little bit more. Working at that cafe just allowed me to do that, and I had a lot of fun while I was there.

”I’ve been at the international level for 10-12 years, and doing the same thing over that period of time, it was nice to have a bit of a change up. I didn’t have many plans when I went on the break, it was just to see how I felt and do whatever I felt like at the time, and I think that’s done me the world of good, and I’m really excited and pumped to be back.”

By her own admission, few leaders in Australian cricket had a more inscrutable game face than Lanning. It took considerable courage to remove the mask, tell those close to her that she needed time away from cricket, and to then genuinely think about what life might be like without the game. 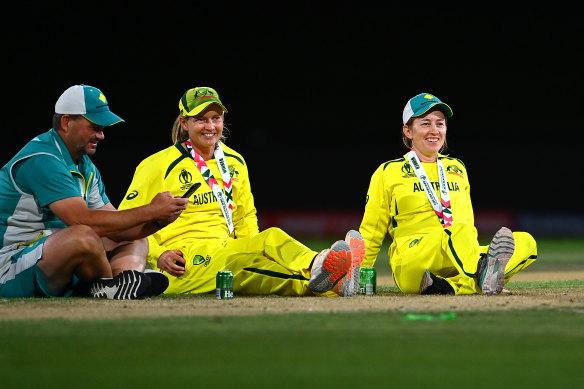 Matthew Mott, Meg Lanning and Rachael Haynes after their World Cup victory. Mott has moved to England, Haynes retired and Lanning took a long break from the game.Credit:Getty Images

“There’s certainly no shame in putting your hand up and saying you need a bit of a break and maybe some help with that,” Lanning said. “That’s something I haven’t done a lot of in my career and life in general, I’ve always been pretty guarded in what I’ve done.

”So that was a bit of a different experience for me, a new experience, but I’ve learnt a lot from it. I certainly don’t have everything worked out, but I’m just committed to seeing what happens and learning along the way and just looking forward to getting back playing with this team.

“It’s not something I anticipated would happen because I was just playing and loving the game. But for me personally it’s been great, I really needed it and enjoyed my time away, but it has confirmed to me I do love the game.”

Of course, there was plenty for both Lanning and Cricket Australia to consider in terms of how the national captain reached a point where she needed to get away.

“She’d been a leader in that environment for a very long time, and I think people underestimate just how much time and energy has to go into that side of the role along with playing and preparing,” Haynes said. “There was just a level of sadness around that Meg had got to that spot, because she’d been such a strong leader in that group for such a long period of time.

“Hopefully, other players in that team or even outside of it can recognise that it’s ok to speak up and let people know if you need a break or some time away and you’ll be supported in doing that. That’s the power in the message.

“Also recognising what are some of the things you can do to not get to the point where you crash and burn. I’ve certainly been in that position before where I’ve just been completely burnt out and need to step away.”

More excitingly for Haynes, an emotionally aware counterpoint to Lanning’s laser focus over five hugely successful years for the team up to 2022, the episode offers the prospect of an even better captain emerging to lead a team in transition.

“We’ve seen a bit of a glimpse in terms of the style of play they brought in India and to have a player like Meg at the top setting the standard like she always does but bringing different elements off-field in terms of a greater understanding of the wider playing group, I just think it will continue to add to the side.”

Haynes has called for more women to have a say in world cricket’s handling of Afghanistan cricket under the Taliban regime, as she expressed support for Cricket Australia’s continued bilateral boycott of the men’s team.

The International Cricket Council is set to discuss Afghanistan’s status as a full member of the global game at its next regular round of meetings in March, after a diverse range of reactions to Cricket Australia’s withdrawal from a scheduled men’s ODI series in the UAE.

While that decision has attracted some cynical responses, Haynes argued that at least in Cricket Australia’s case, it had not just been men involved in high-level talks. Two women, Vanessa Guthrie and Clea Smith, sit on the Cricket Australia board. 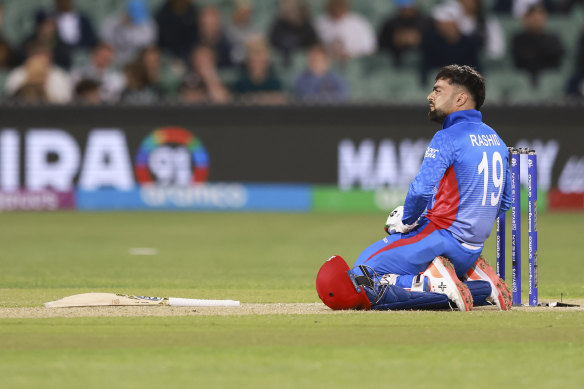 “No one wants to see Afghanistan cricket lost to the game, from both the men’s and women’s sides,” Haynes said. “But at the moment they aren’t fulfilling their obligations as a full member nation.

“I know when they initially were granted that membership, it was on the proviso that they supported their women’s side and plans were put in place to do that, but since then, it’s most certainly regressed, it hasn’t progressed in any fashion.”

Haynes stated that while there had been a lot of opposition raised by male Afghanistan cricketers, including the Big Bash League stalwart Rashid Khan, the missing perspective was that of women in Afghanistan, noting that there was no representation at the under-19 women’s World Cup currently under way.

“There hasn’t been a lot from those female voices and perhaps those past players in that team,” Haynes said. “I’m sure for them it’s incredibly difficult to watch their men’s side play at times and know that that is something they’re not able to do. And we see the under-19s World Cup on at the moment, and the same example again, those girls are not able to be there and participate in that.

“So I definitely understand this is a very complex issue, but by the same token I think it’s an opportunity as well for the ICC to show some leadership. I think they’ve been very silent. I know there’s a committee in place, that’s made up of four men, mind you, to navigate this issue, and it would be fantastic to hear some leadership from the ICC on this, which I think is really important, rather than just allowing individual countries to bear the brunt of the issue.”

The ICC working group on Afghanistan cricket, comprising Imran Khwaja, Ross McCollum, Lawson Naidoo and Ramiz Raja, provided an update on the situation late last year. More recently, the ICC’s chief executive Geoff Allardice said the lack of any real progress in terms of the women’s program was cause for mounting concern.

“Our board has been monitoring progress since the change of regime,” Allardice said last week. “It is a concern that progress is not being made in Afghanistan and it’s something our board will consider at its next meeting in March. As far as we are aware, there isn’t activity at the moment.”

No full member of the ICC has ever been chaired by a woman. As a consequence, the governing body specifically created a role for an independent female director – a position currently held by Indra Nooyi – in order to add greater diversity to high-level decisions.

“In Australia we’ve seen a positive change in that, in terms of Avril Fahey becoming the first female chair elected in Western Australia, but that seems to be a bit of a missing voice in this area at the moment as well,” Haynes said.

“I’m under no illusions that it’s complex, but I do think that CA have made the right decision from my point of view, and that’s speaking as an individual. If you look at it from the point of view of your obligations as a full member nation, they’re not fulfilling that in quite a significant way at the moment.”