Oliveira and Chandler loaded up from the very start of their lightweight title fight in Saturday night’s main event, with the Brazilian immediately sending the American to the mat with a thumping calf kick.

But Chandler bounced back to his feet and connected with a big left hand that forced Oliveira to shoot in for a takedown.

With the fight on the mat, Chandler was forced to play defence as he fended off the Brazilian jiu-jitsu ace’s attempt to create a submission opportunity.

And when the American burst out of Oliveira’s back mount and escaped his clutches, the Houston crowd roared its approval. 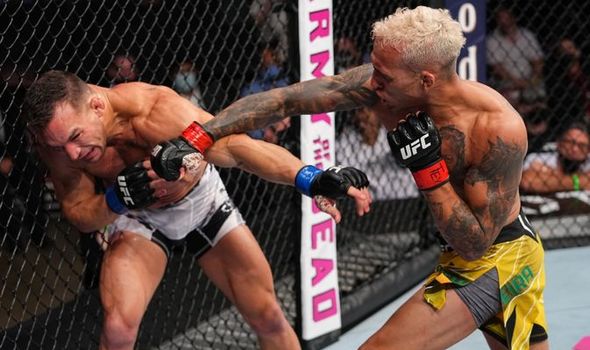 With the fight back on the feet, the momentum swung in Chandler’s favour as he unloaded heavy punches that had Oliveira in big trouble.

A big left hand stunned the Brazilian, then a follow-up right hand forced him to the canvas as Chandler pushed the pace in search of a late first-round finish.

But, despite pouring on the pressure and connecting with a host of ground strikes, he wasn’t able to land enough clean shots to force the stoppage as Oliveira survived the round.

When the pair emerged from their corners from the start of Round 2, it looked like the momentum was with Chandler, but that all changed in the blink of an eye.

Oliveira let his hands go from the start of the round and drew huge gasps from the Houston crowd as he dropped Chandler with a perfectly-timed left hook.

Chandler scrambled back to his feet, but was dropped again and finished as Oliveira connected with a series of ground strikes that forced referee Dan Miragliotta to stop the fight just 19 seconds into the round.

Oliveira celebrated wildly, jumping the octagon fence and charging into the crowd, before security finally convinced him to return to the cage for the official announcements.

Oliveira’s victory earned him not only the UFC lightweight title, but also the record for the most finishes in UFC history, with his 17th inside-the-distance victory in the octagon.

“I told you I was going to knock him out, and I came and knocked him out,” said Oliveira.

“I’m proving to everybody, I’m the lion of lions.

“Michael, you’re a great champion, but today was my day. 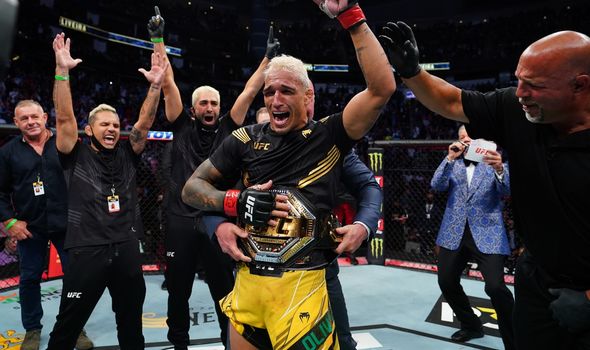 Chandler vowed to bounce back and win the title in the next year as he heaped praise on his opponent after the fight.

“I think we saw one of the toughest dudes on the planet come back from some adversity. Charles Oliveira is the real deal,” he said.

“I take nothing away from him. I will be back. I promise you I’m going to win that UFC strap within the next 12 months. This was a great opportunity. I thank the UFC for this opportunity.

“Charles Oliveira showed how he’s a consummate professional. He’s showed up for the last 10, 11 years here inside the UFC octagon.