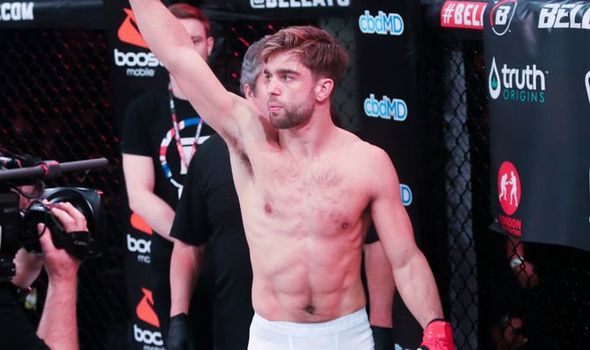 London lightweight Alfie Davis will look to make his next step up Bellator’s lightweight ladder when he returns to action on May 21.

Davis, 29, has a record of 14 wins, three losses, and has been undefeated on the global stage with Bellator, with the Brit earning four consecutive unanimous decision victories to establish himself as one of Europe’s top lightweight prospects.

Bellator officials confirmed to Express Sport that Davis’ next assignment will come at Bellator 259 on May 21, where he will take on Russian prospect Alexander Shabliy at the Mohegan Sun Arena in Uncasville, Connecticut.

Shabily has competed for a host of promotions, most notably ACB/ACA and Fight Nights Global in Russia, and arrives in Bellator riding a four-fight win streak, with a record of 19 wins, three losses.

Davis joins fellow Brits Brett Johns and Fabian Edwards on the fight card for May 21, with Welsh bantamweight Johns looking to make a splash on his Bellator debut against Brazilian contender Matheus Mattos.

Middleweight Edwards, meanwhile, will look to bounce back from his first career defeat when he takes on undefeated American contender Austin Vanderford.

The main event will feature a battle for the Bellator women’s featherweight title as Brazil’s defending champion Cris Cyborg puts the 145-pound title on the line against America’s Leslie Smith.

The bout is a rematch of their meeting at UFC 198 back in 2016, when Cyborg claimed a 81-second TKO victory in a fight Smith insists was stopped prematurely.

Now the pair are set to face off again with championship gold on the line, as Smith looks to avenge her prior loss, while former UFC champion Cyborg attempts to register the first successful defence of her newly-won Bellator title.