Virgin territory: Josh and Jayne had much to discuss

What we wouldn’t give to know what Virgin Australia boss Jayne Hrdlicka – who is also Tennis Australia chair – had to say to former federal treasurer Josh Frydenberg as the pair sat side by side at Rod Laver Arena on Tuesday night to watch Stefanos Tsitsipas storm into the semi-finals.

Hrdlicka and Frydenberg were among a bunch of other worthies, with Rod Laver on the other side of the Virgin chief executive and former Australian cricket captain Steve Smith a few seats over from the former member for Kooyong.

Frydenberg, of course, was No.2 bloke in Scott Morrison’s government when it refused, back in the dark days of early 2020, to bail out Virgin as the airline tail-spun towards insolvency.

It wasn’t lost on anyone that Frydenberg – whose government also deported nine-time Open champ Novak Djokovic last year – proceeded to pump more than $2 billion of taxpayers’ money, including JobKeeper, into keeping Qantas aloft while somehow failing to emerge with anything resembling an equity stake in the increasingly unpopular national carrier.

There are still plenty of hard feelings at Virgin but probably not on Hrdlicka’s part. She didn’t work at Virgin when it went broke; she was hired by her former bosses at Bain Capital in November 2020 after the private equity outfit picked up the airline at a bargain-basement price. 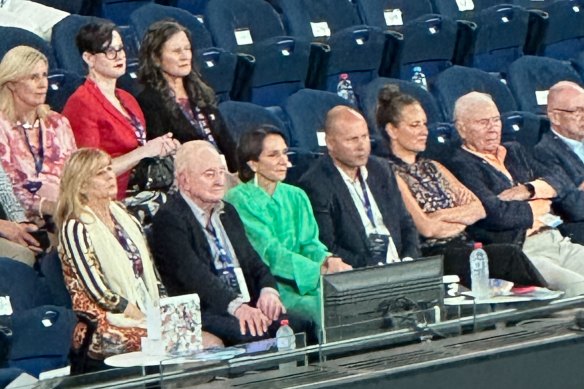 Now Bain and Hrdlicka – who also once worked at Qantas – are preparing to float Virgin on the stock market, just the type of thing you’d want to chat about with an executive from investment banking behemoth Goldman Sachs, which is what Frydenberg is these days. Or maybe they just talked about the tennis.

Tennis Australia has been making much in its marketing efforts of the Beach Bar at Melbourne Park this year, and Open Season can confirm it’s very nice, although a pot of beer will cost you 12 bucks and the joint doesn’t appear to have been designed with our city’s changeable weather in mind.

Fans trying to enjoy a cold one at the venue on Tuesday evening were left bemused as bar workers made heavy weather of the conditions: every time a drop of rain fell, the Open crew came running out to take down the bar’s giant outdoor umbrellas, explaining it was “too windy” for them.

We’re told the umbrellas came down four or five times as punters, including former Essendon defender Marty Gleeson, looked on aghast. Maybe the poor man was having flashbacks to his years at Windy Hill.

Laver hasn’t been the only dead-set legend knocking around Melbourne Park.

Billie Jean King, Judy Dalton, Kerry Melville Reid, Rosie Casals, Peaches Bartkowicz, Kristy Pigeon and Valerie Ziegenfuss – all members of the “Original Nine” who revolutionised the women’s game when they broke away from the official governing bodies in 1970 to launch their own professional tour, forerunner to the modern WTA – were together again and enjoying the action on Wednesday evening.

You have to wonder if it’s wise for Tennis Australia to be celebrating the pioneers of breakaway comps as enthusiastically as Craig Tiley’s people were on Wednesday, but we’re sure they know what they’re doing.

Also spotted in the crowd was the one-and-only Evonne Goolagong Cawley, as well as fellow Australian greats of the court Frank Sedgman, Ken Rosewall, Pat Cash and Neale Fraser.