Players in final no bearing on Open flag ban

The very real possibility of an all-Belarusian women’s singles final will not tempt Australian Open officials to relax a ban on fans attending with Russian or Belarusian national flags.

Belarusians Aryna Sabalenka and Victoria Azarenka are in opposite semi-finals on Thursday and could meet in Saturday night’s final, but are playing under a neutral flag as part of governing bodies’ decision in July after Russia’s invasion of Ukraine. 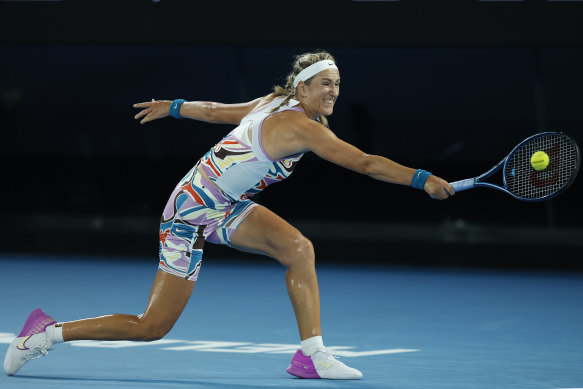 Victoria Azarenka is playing at the Open as a neutral.Credit:Getty Images

Wimbledon banned Russian and Belarusian players altogether, resulting in the tours stripping the grand slam of ranking points, but they are also unable to compete in team events, such as the Davis Cup, Billie Jean King Cup and United Cup.

Tennis Australia’s stance for the 2023 Australian Open is in line with that of the governing bodies and Australian Sports Minister Anika Wells, who joined more than 30 peers from other nations to show solidarity with Ukraine.

But as the war rages on, it understandably remains a divisive topic, as was evidenced in the early days of the Open. Tennis Australia originally let fans bring in national flags, on the proviso they were not used to “cause disruption”, but that quickly changed after some courtside incidents.

A Tennis Australia spokesperson confirmed that the flag ban would not be lifted before the tournament ended.

Australian wildcards Jason Kubler and Rinky Hijikata are one win from a shock appearance in the men’s doubles final, a year on from the all-local decider.

Kubler and Hijikata eliminated the sixth seeds in the second round, but went to another level on Wednesday, trouncing top seeds Wesley Koolhof and Neal Skupski 6-3, 6-1 to make the semi-finals.

The Aussie pairing also saved a match point in the third round, so it is becoming a remarkable event for them, given neither is ranked inside the top 150 for doubles. 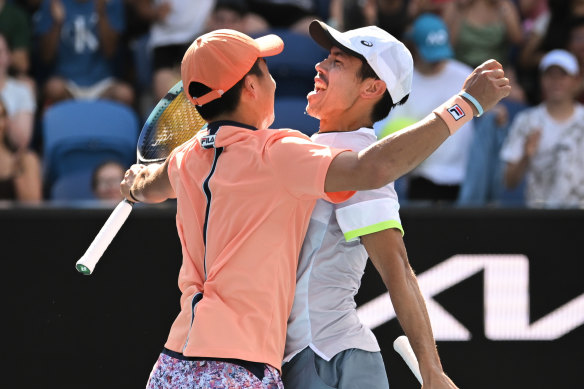 Rinky Hijikata (left) and Jason Kubler are on a roll.Credit:Eddie Jim

Nick Kyrgios and Thanasi Kokkinakis caused almost-daily headlines with their stunning run together at Melbourne Park last year, capped by their triumph over countrymen Max Purcell and Matt Ebden in the final.

The Kubler-Hijikata duo isn’t the only Australian combination performing well, with Marc Polmans and Olivia Gadecki advancing to the mixed doubles semi-finals.

Four on the trot

Aryna Sabalenka’s breakthrough Australian Open has qualified her for an exclusive club.

The 24-year-old fifth seed was once considered an underachiever – and she is still chasing a maiden major title – but her 6-3, 6-2 defeat of Donna Vekic makes her just the sixth woman to win her first four grand slam quarter-finals.

Sabalenka, who is into her fourth grand slam semi-final from her past six attempts, joins all-time great Chris Evert (48), Ann Jones (six), Billie Jean King, Elena Dementieva and Naomi Osaka (all four) in doing so.

Speaking of Billie Jean King, she and six other legendary members of the “Original Nine”, whose breakaway tennis circuit eventually became the modern WTA Tour, were at Melbourne Park on Wednesday.

They signed a symbolic $1 contract with the grander goal of championing equal rights for women.

“I feel very proud. I think we did a fantastic job. I don’t know whether we all realise what an effect we had,” Dalton said.

“We hoped that we would have a terrific effect, but I’m not sure we realised it would be as great as what it was.”

They will headline the AO Inspirational Series luncheon on Thursday.