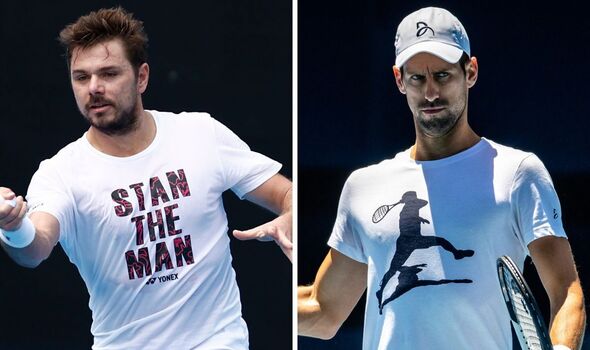 Aussie fans should be allowed to boo Novak Djokovic because “that’s tennis”, Stan Wawrinka has claimed. Australian Open organisers have threatened to throw out any supporters who target the Serbian on his return to the event this year.

The nine-time champion caused an international sensation last January when he was deported after entering the country without a Covid vaccine.

And 2014 champion Stan Wawrinka told the Herald Sun: “If they go over the limit then yes, but I think they should be allowed to do whatever they want. “They do it every year with every player – if they don’t like the player, or they like another one, they will boo one and cheer for the other one. That’s tennis. That’s sport. That’s what you want.

“So of course, things happened with Novak last year, and I think there was many mistakes – not only Novak. I do believe they will not boo him. They will be happy to see him and it’s going to be a great tournament.”

Andy Murray added: “I don’t necessarily like seeing players get booed. It’s not a nice feeling for players when that happens. I saw Novak’s match in Adelaide and he got great supprot and I’m sure that it’ll probably be the same in Melbourne.”

Djokovic is scheduled to play a charity match against local favourite Nick Kyrgios in the Rod Laver Arena on Friday night. But the Serb cut short a training session on Wednesday because of a hamstring issue and practised with strapping on his left leg today.

The Aussie and the Serb had a tense relationship – with Kyrgios branding Djokovic “a tool” for complaining about quarantine rules at the 2021 Australian Open.

But the Wimbledon finalist spoke publicly in support of Djokovic here last year and Kyrgios said: “I think from a supporting point of view, I know that people are always going to have the people they hate and people they love. I’m one of those player who deals with everywhere I go with people screaming out inappropriate things. Fans love that rollercoaster ride.

“But I would just say that Novak’s here and he hasn’t made any rules. He’s one of the greatest athletes of all time, not just on the tennis courts. So he’s here and all he wants to do is to put on a show for Melbourne itself. He’s not just doing it for himself. I think as fans we should be appreciating that. I know there are fans who are not going to want him to win but you can’t cross that line.

“You guys have paid money to watch the guy play it. It’s pretty contradictory if you’re gonna go there and be a clown about it. You gotta respect him a little bit at the end of the day.”