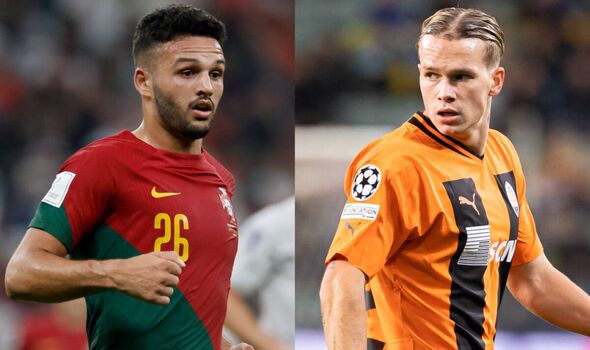 Arsenal chiefs have ‘promised’ Mikel Arteta that he will be well-backed this month, with the Spaniard keen to bolster his attacking ranks at short notice. An injury sustained by Gabriel Jesus at the Qatar World Cup has prompted a search for a cut-price striker to provide short-term squad depth, with the club keen to avoid throwing away their lead at the top of the Premier League.

Shakhtar Donetsk’s Mykhaylo Mudryk was already a top target heading into January, and talks are continuing with the Ukrainian outfit to strike a deal for his signature. The 22-year-old is keen to make the move to the Emirates Stadium, but the Gunners are reluctant to meet his asking price of approximately £88million.

Following Chelsea’s interest in the winger fizzling out, confidence has grown in north London that a deal will be reached for Mudryk for a figure considerably less than his reported price tag. The forward is currently remaining with his Shakhtar teammates at their midseason training camp in Turkey.

Updates on Mudryk’s pursuit are expected throughout the day, as well as from Arsenal’s other transfer pursuits. Express Sport brings you all the latest…

Former England manager Sven-Goran Eriksson has claimed that he is ‘sure’ that Arsenal are keeping tabs on Benfica star Goncalo Ramos.

The Portuguese international boosted his profile significantly at the World Cup, being selected over Cristiano Ronaldo in the knockouts of the competition. The 21-year-old repaid the faith of his manager too, grabbing a hat-trick in the Round of 16.

Ramos has scored nine in 13 league appearances in Portugal too, prompting speculation that a big move is on the horizon for the talented prospect.

Speaking to OLGB, Eriksson said: “Goncalo Ramos is a fantastic player, it’s not easy to replace Cristiano Ronaldo like he did. He will end up in the Premier League like a lot of Portuguese players, he can adapt there.

“If he wants to go to England, he’ll want to go to a big club. I’m sure that clubs like Arsenal or Manchester United will look out for him. He’s a player destined for the Premier League because it’s the best league in the world and the best want to play there.”

Arsenal chief executive Vinai Venkatesham has confirmed that the club are looking to ‘see what opportunities are out there’ in this month’s transfer window.

With talks with Mudryk and Shakhtar continuing, the ‘promise’ hinted that Mikel Arteta has received assurances that his squad will be strengthened before February arrives.

Speaking to Sky Sports, Venkatesham said: “We’ve got a very clear plan headed up by [sporting director] Edu about what we want to do to strengthen the squad. Every transfer window, of course, we’re going to look to see what opportunities are out there. If something makes sense from a technical perspective and a financial perspective of course we’ll look at it.

“We’ll of course have a look what’s around every single transfer window. We’ve got a long-term plan to continue to strengthen the team.”