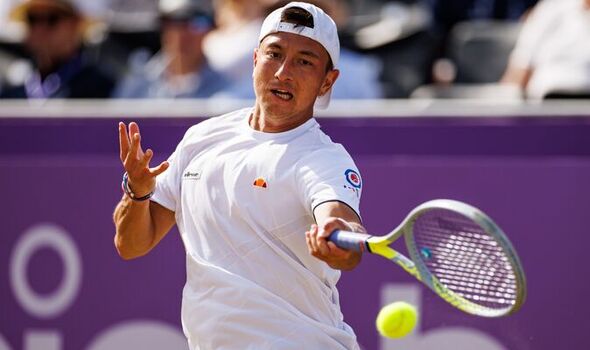 Ryan Peniston has opened up on the career-changing impact his impending £100k grass-court season payday will have. The world No 180 reached the quarter-finals at Queen’s in his ATP Tour debut this week, earning £50,230, and is already guaranteed at least £50,000 for playing the first round at Wimbledon, having received a wildcard to make his main draw debut.

Peniston’s fairytale week came to an end in the quarter-finals as the Essex native was beaten by world No 48 Filip Krajinovic 4-6 6-3 6-3. He upset top seed and recent French Open finalist Casper Ruud in his ATP Tour debut on Tuesday before downing world No 46 Francisco Cerundolo in three sets to reach the last-eight.

The 26-year-old will now pocket £50,230 as a result of his run to the quarter-finals of the cinch Championships. Prior to the tournament, his career prize money earnings in singles were almost half of that amount at £27,777, and he is guaranteed to pick up at least £50,000 at Wimbledon.

The ATP Tour debutant has now shared how much the huge influx of cash could help his career as he is set to pocket more than £100k in the next month, having also been announced as the recipient of a wildcard for next week’s ATP 250 in Eastbourne. “It’s a lot of money for someone like myself who has been playing on a future tour a couple of years ago to now the Challengers,” he explained.

“It’s definitely going to help a lot in my career I think and I am just going to just reinvest it in myself and try and just do the things I have been doing and get better.” Asked whether reinvesting could mean having the ability to hire a travelling coach or physio, Peniston continued: “100 per cent.

“I think it’s something I have been doing for the last couple of years. Investing in myself. Just being able to pay for training and travel and now I’m starting to be able to afford, like you said, a coach to travel with. The next step is being able to afford a physical trainer on the road, which I think is super important, and trying to basically improve the team and have them as much with me as possible.”

But the world No 180, who will rise inside the world’s top 150 for the first time as a result of his run at Queen’s, hasn’t ruled out treating himself too. “I’m not sure. Maybe. I will think about that after Wimbledon I think,” he laughed.

After a career-best week aged 26, Peniston is now thinking bigger with more tournaments ahead on the grass. “I think I’ve always had a belief in myself, but just to have some of the results that I had this week, it helps solidify that,” he confessed.

“I think the next stop, ranking stop for me will be top 100, and just got to keep pushing for those goals that I want to achieve. I think I can definitely do it.” And he made it clear that he wanted to take the crowd support with him to Eastbourne and Wimbledon as he reflected on some of his best memories of what he has previously called the best week of his life.

“I think the main thing, favourite thing from this week has been the crowd and having my family there as well to watch,” he said, and was asked whether he wanted the same at his next two events. He smiled: “I would love it. Yes, it would be great.”