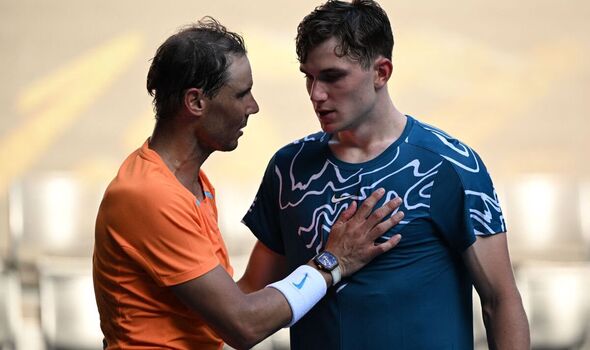 Rafael Nadal knows that he came through a difficult test against British hopeful Jack Draper at the Australian Open on Monday and tipped the youngster for a “great future” in the sport. Nadal’s match against Draper was arguably the pick of the first-round matches with the 21-year-old fast becoming one of the stars for the future in tennis.

Draper enjoyed a breakout season last year which included impressive wins over the likes of Stefanos Tsitsipas, Dominic Thiem and Felix Auger-Aliassime. He also gave Novak Djokovic a run for his money at Wimbledon in 2021, winning the opening set against the top seed after entering the tournament as a wildcard.

Now ranked 40th in the world, Draper is seen as one of the brightest talents in the men’s game and made Nadal work for his place in the second round of the Australian Open. Draper looked in great form early on against the reigning Australian Open champion, winning the second set in style to level the match up.

But there were signs later in the match that Draper was struggling with an underlying physical issue and appeared to suffer from bad cramp in the third set. At one stage in the fourth, Draper was not even able to push off his leg on serve with Nadal eventually seeing out the match.

The pair shared a moment at the net before Nadal basked in his win in front of the Rod Laver Arena crowd. But the 22-time Grand Slam champion showed his class with a message of support for Draper moving forward.

“If we put in perspective all the situations that I went through the last six months, I think it has been a very positive start,” he said. “I played against one of the toughest opponents possible in the first round being seeded.

“He’s young, he has the power and I think he has a great future in front of him. We’re gonna see him playing a lot of years here and having very good results.”

It also presents a big win for Nadal, who has been suffering with injury issues of his own over the past few months. It’s his first victory of 2023 and the Spaniard is hopeful it can help kickstart his year heading into the latter rounds of the Australian Open.

“Last year has been one of the most emotional tournaments of my tennis career,” Nadal added. “No doubt about that, but unfortunately that’s the past. We need to keep working, super happy to be back here in Australia one more time.

“It’s my 19th season in the professional tour, so very excited about this. New beginning, just super happy to be back in the Rod Laver Arena with a victory that I needed.

“The last couple of months haven’t been easy for me but hopefully this victory is gonna help me.”