Tennis Australia has banned the flags of Russia and Belarus from the Australian Open after fans flew the Russian flag courtside at multiple matches on day one, prompting a diplomatic incident.

Ukraine’s ambassador to Australia, Vasyl Myroshnychenko, had demanded organisers take action after fans flew the Russian flag to support Kamilla Rakhimova in her first round match against Ukraine’s Kateryna Baindl on Monday. 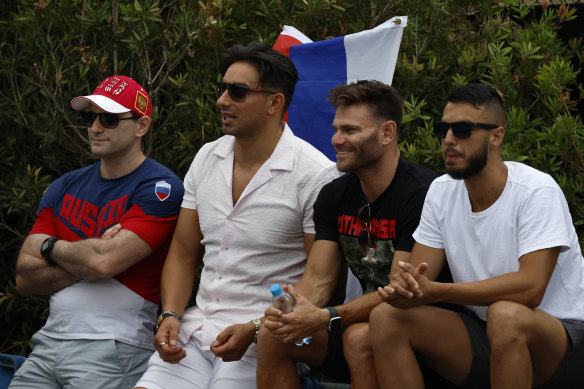 A Russian flag is seen during the first round match between Kamilla Rakhimova of Russia and Kateryna Baindl of Ukraine at the Australian Open.Credit:AP

Ukrainian fans called security and police to court 14 but they took no action. However on Tuesday morning, Tennis Australia said it had now banned Russian and Belarusian flags from Melbourne Park, effective immediately.

“Our initial policy was that fans could bring them in but could not use them to cause disruption. Yesterday we had an incident where a flag was placed courtside,” Tennis Australia said. “We will continue to work with the players and our fans to ensure the best possible environment to enjoy the tennis.”

For nearly a year, the tennis world has grappled with how to deal with Russian players in the wake of Vladimir Putin’s invasion of Ukraine. In Britain, Wimbledon banned Russian and Belarusian players last year, prompting the tour to strip the tournament of its ranking points.

Tennis Australia has allowed the athletes to compete as independent players but not to represent their country. Instead of a Russian flag, a white or neutral flag appears next to the players’ names.

Ukrainian-Australian tennis fan Maria Tumarkin attended the Russia-Ukraine match on Monday and called security to the court, claiming the Russian fans were heckling and “taunting” the Ukrainian player, Baindl.

“This is profoundly unsafe, the war is ongoing,” she told the Herald and The Age on Tuesday. “It’s a small court, the guys were extremely close to the players, so there was an element of what I felt was intimidation.”

Tumarkin said security personnel appeared not to have been briefed on the sensitivities of a Russia-Ukraine match amid the ongoing war, but the men put their flag away when guards approached. The match was not affected by the incident and Baindl went on to defeat her opponent in three sets.

One of the Russian fans involved in the incident, Eugene Routman, spoke to the Herald and The Age from the stands of Rod Laver Arena on Monday night after cheering world no. 7 Daniil Medvedev to a breezy victory over American Marcos Garin. 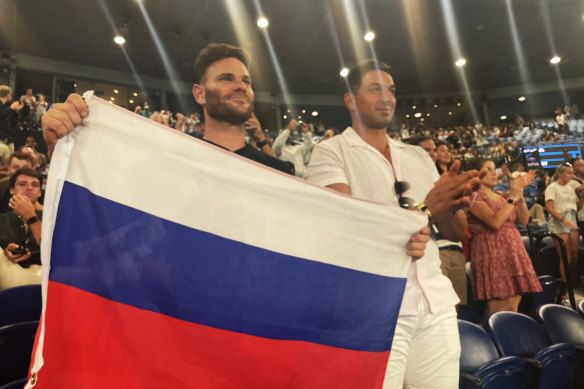 Dressed in a “Mother Russia” T-shirt which bore a shirtless Putin on horseback but with devil horns, Routman denied heckling the Ukrainian player at the earlier match and said he was simply cheering on the Russian Rakhimova, who only had her mum in her supporters’ box.

“That was it,” he said. “People can view that as being obnoxious but we were just being your normal supporters. There was no ridiculing or disrespect.”

Routman, 36, was born in Moscow but moved to Australia when he was five. He said it was wrong for the Australian Open to prevent Russian and Belarusian players representing their countries.

“Sport has nothing to do with politics and politics should have nothing to do with sport,” he said. “It’s a tennis game. You’re punishing the tennis players who probably are against the war but they can’t speak because Russia’s not a democracy, Russia’s an authoritarian state.”

Earlier, before the crowd flag ban was announced, the co-chair of the Australian Federation of Ukrainian Organisations, Stefan Romaniw said it was unacceptable for Tennis Australia to allow the flag to be displayed as “these are not normal times”.