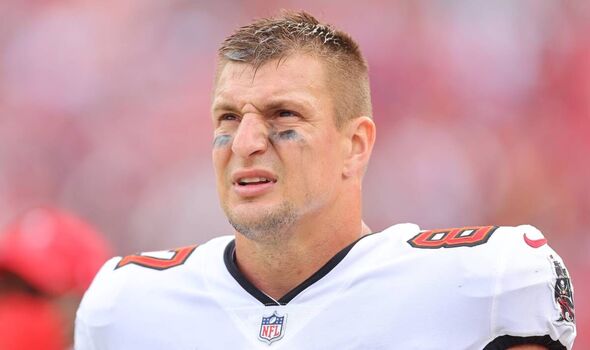 NFL star Rob Gronkowski has admitted he nearly returned to the NFL before the start of the season, claiming he almost signed for the Buffalo Bills. Gronkwoski has been heavily linked with a return to the NFL just one year after retiring.

Gronkowski walked away from the NFL for the second time after the Tampa Bay Buccaneers were eliminated from the postseason in the NFC Divisional Play-Off by the LA Rams.

The tight end joined his team-mate and close friend Tom Brady into retirement, and though Brady reversed his decision a month later, ‘Gronk’ chose to stay retired. Throughout the season, however, Gronkowski has been tipped to come back to the sport and return – most likely with the Buccaneers again to reunite with Brady for a third time.

But now, the man himself has admitted he almost returned before the start of the season – joining the Buffalo Bills and megastar quarterback Josh Allen.

Speaking to the New Heights with Jason & Travis Kelce podcast, Gronkowski revealed he’s become a fan of the Bills over the course of the season, while revealing how close he came to a surprise comeback.

He said: “Now I’m retired again, I’m kinda a Buffalo Bills fan. Now I’m not playing no more I’m kinda like ‘dang, how cool would it be to play for the Buffalo Bills?’

“I actually thought about it when Tom retired this year. I didn’t really feel like playing football again, but Tom retired and I thought I’d check out some other teams.

“I was in talks with the Buffalo Bills a little bit, they wanted me to come up there, and it just wasn’t there. If my mindset was there, I’d most likely be in Buffalo right now playing for the Bills.”