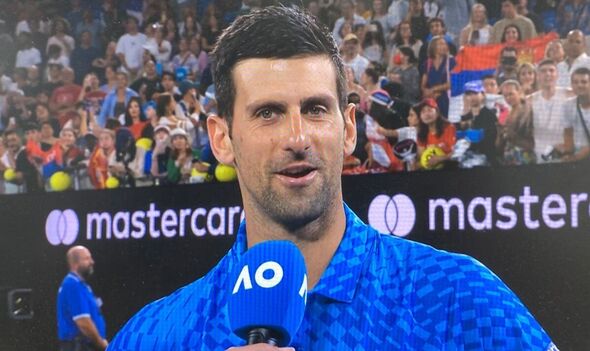 Novak Djokovic has thanked those inside the Rod Laver Arena for making him feel welcome on his return to the Australian Open following his visa saga 12 months ago. It was exactly a year ago on Monday when Djokovic was deported from Australia following his desperate bid to play in the Grand Slam despite not meeting the vaccination requirements.

The tennis icon was originally granted a medical exemption to enter Australia, but he was then immediately detained by the Australian Border Force upon his arrival in the country. Following a 10-day saga, Djokovic ultimately lost his last-ditch court bid to stay and play in the Australian Open.

Fast forward 12 months and Djokovic is back at Melbourne Park, bidding for his 10th major title Down Under. Djokovic has already admitted that returning to the scene of all the drama from last year has brought up certain emotions.

And there was some trepidation on what kind of atmosphere Djokovic would receive inside Melbourne Park after a large number of Australians were left angry and the Serbian’s attempts to play last year’s tournament while unvaccinated. But he was given a roaring ovation when he made his way onto court to face Roberto Carballes Baena late into the night on Tuesday.

And the 35-year-old put on a show for the crowd inside Rod Laver Arena, winning the final set in just 24 minutes. Djokovic thanked those inside the Rod Laver Arena for sticking behind so late and for giving him a welcoming reception.

“Unbelievable atmosphere, thank you so much for staying this late everybody,” he said. “Also, thank you for giving me such welcoming reception I could only dream of.

“I feel really happy that I’m back in Australia and I’m back here on the court where I had the biggest success in my career. Definitely this court is the most special court in my life and couldn’t ask for a better start in the tournament.”

His win on Tuesday was also Djokovic’s 22nd consecutive victory at the Australian Open. He last tasted defeat in Melbourne Park back in 2018 when Chung Hyeon pulled off a huge upset.

And Djokovic suggests that his confidence is sky-high whenever he steps onto the Rod Laver Arena. “I guess the more you win on a certain court, the more comfortable and confident you feel every next time you step on it,” he said.

“That’s probably one of the reasons. I’ve been fortunate to win a lot of matches on this court, particularly in the night sessions. If I have to choose one court and conditions it would be night sessions on the Rod Laver Arena all night long.”